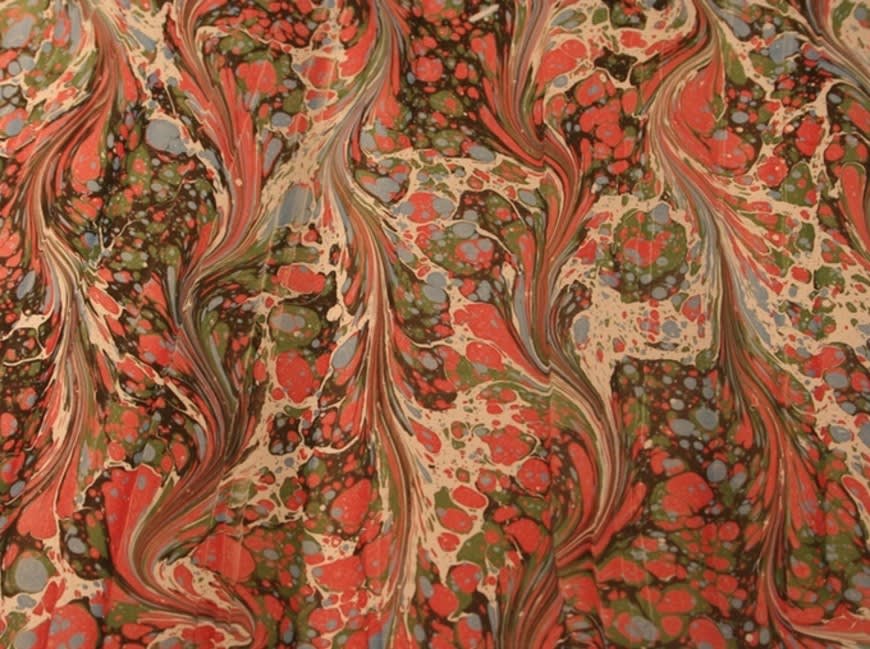 Marbling, originating from the Greek word marmaros, translates to “a snow white and spotless stone.” The term marbling evokes a unique visual signifier, whether it be a sleek kitchen counter, or the universally recognized swirling pattern found on various consumer products. Paper marbling, however, is a traditional artistic method of aqueous surface design. The technique produces patterns from colorful pigments floated on either plain water or a viscous solution, that are then transferred onto an absorbent surface. By result, these dynamic, sporadic motifs, incorporate depth and dimension atop the material onto which they become attached.

Thought to have originated in eastern Europe or western Asia at the beginning of the twelfth-century, the earliest marbled papers that remain in existence today are of Turkish descent from the 1400s. Like all Ottoman artforms, the art of marbling was not taught by written explanation but was instead a craft in which students were trained using the ‘master/apprentice’ system. By the 1600s, the art of marbling was established throughout Western Europe by the crusaders and dominated countries such as France and the Netherlands, who had both become well known for their high-quality papers. 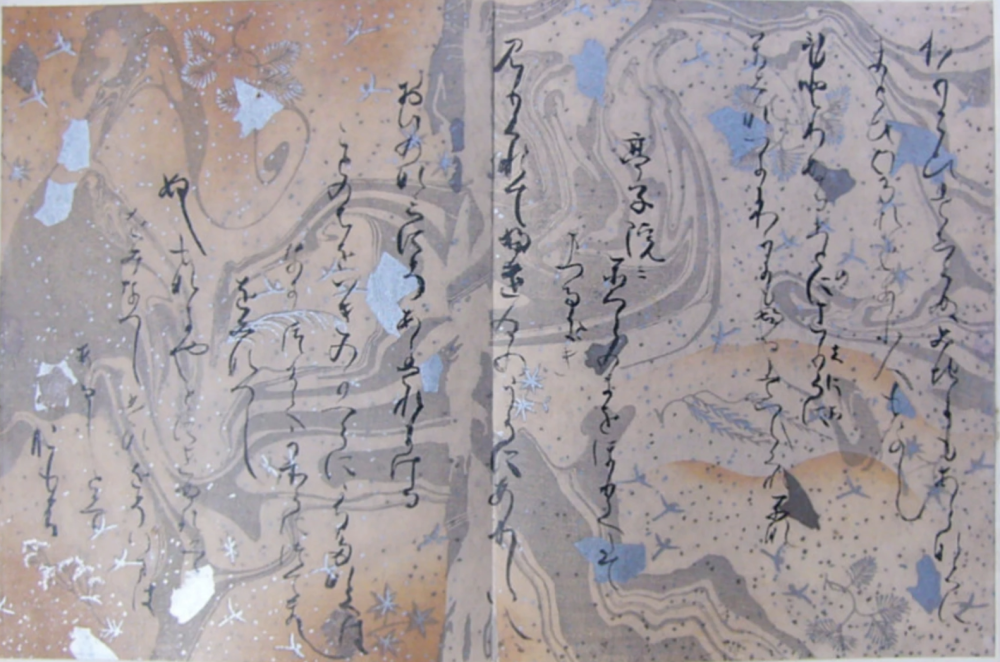 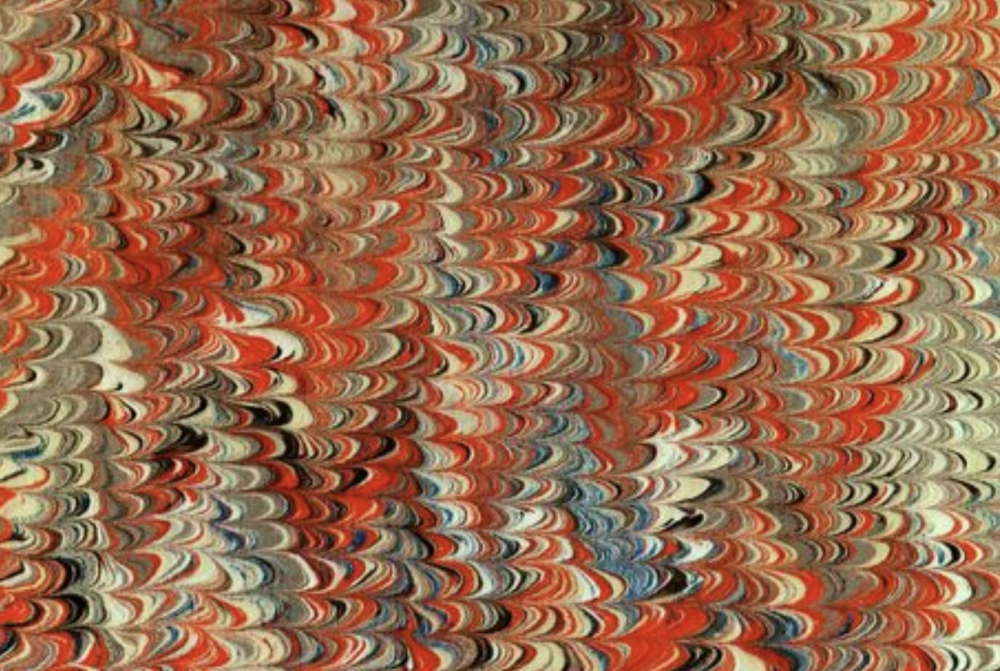 Historically, marbled papers were primarily used for decorative purposes, serving as backgrounds for official court documents and signatures in an effort to prevent forgery and replication. In particular, marbling became an essential element of early bookbinding, as the ornate papers were placed on interior covers and wrapped around spines. These ornamental finishes were also used to mask a binding’s folds, strings and glue marks, in addition to serving as an aesthetic transition from a book’s dark leather cover to the white pages inside. 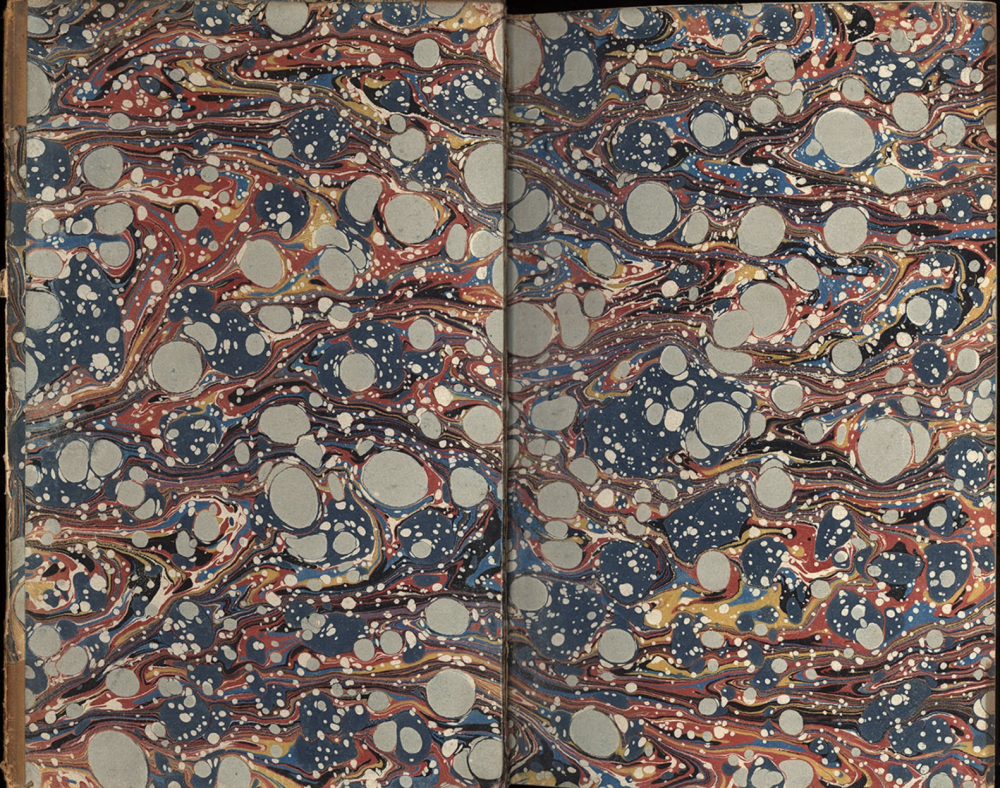 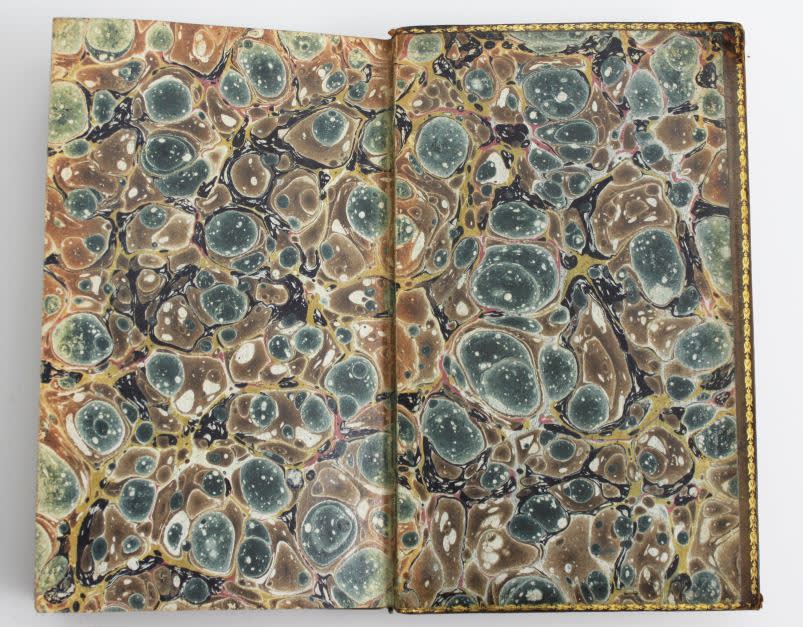 Although marbled papers were adapted in the paradigm of early book-making, marblers kept their guilds separate from that of bookbinders, as the latter was desperate to discover the techniques of marbling in order to avoid the upcharge of craftmanship and the high cost of their papers. As is the case when any niche industry scales internationally, when the technique spread, marbling education books became readily available, transforming what was once a mark of prestige into an attainable commodity. 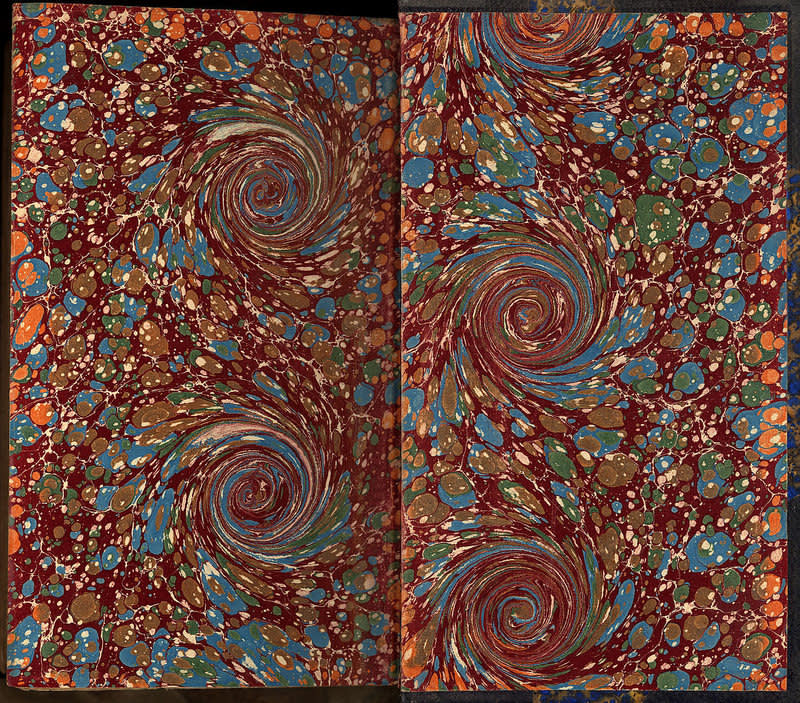 The technique of paper marbling, however, is still quite methodical, despite its universal appeal. Artists first fill a shallow tray with water, then apply ink or paint along with chemicals to keep the colors afloat. Marblers then blow on the solution or even use human hair to manipulate the paint into their desired design; making the technique an exceedingly personal one, as craftspeople often incorporate their own body in the process of creation. Next, artists transfer their work onto paper or fabric by gently floating the respective material atop the liquid solution. Marblers can transfer patterns onto the same medium more than once, further layering and deepening the resulting pattern. 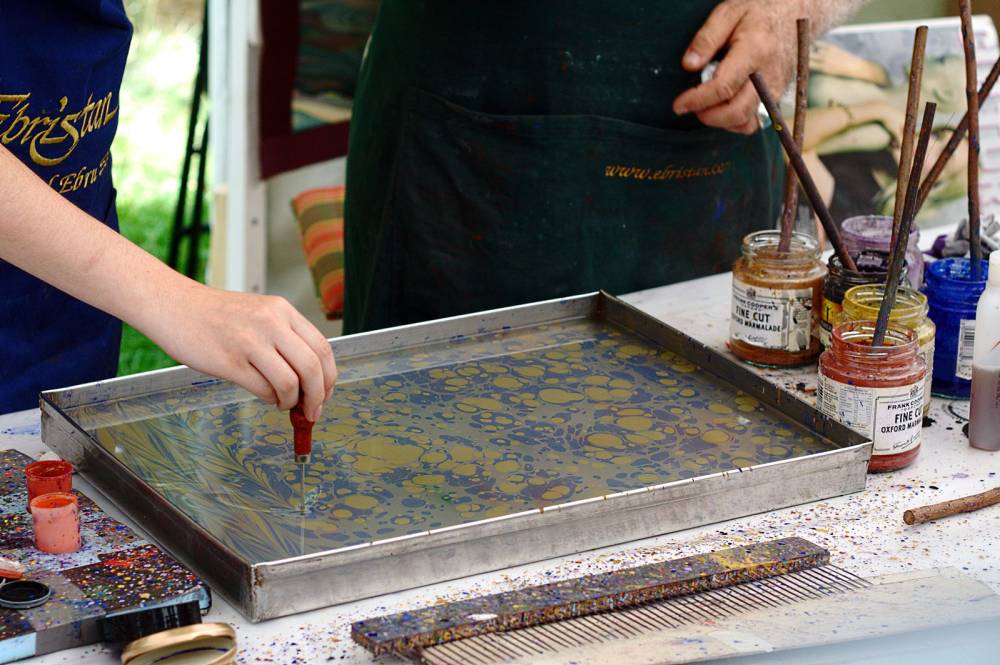 The marbling technique can be likened to countless other artistic practices, namely traditional printmaking, and has given rise to a slew of specialized tools, such as brushes of horsehair bound to straight rose twigs, deep trays of unknotted pinewood, natural earth pigments and cattle galls which are used as wetting agents. In traditional marbling, pages are hand dipped into a solution consisting of various pigments, which produce one-of-a-kind psychedelic patterns, complete with irregular swirls and loops serving as chanceful artistic narratives. In Japan, these hallmark motifs are referred to as Suminagashi, translating to ‘ink-floating.’ This special technique involves artists strategically placing ink with water to create a marbled pattern, which they then transfer onto a piece of washi paper. Much like the proprietary tools developed throughout Europe, the Japanese would often use a split piece of bamboo to strategically move the paint solution in their desired directions. This distinctive Japanese marbling technique continued for centuries, ultimately moving westward into Turkey and eventually England, where publishers adapted the process. 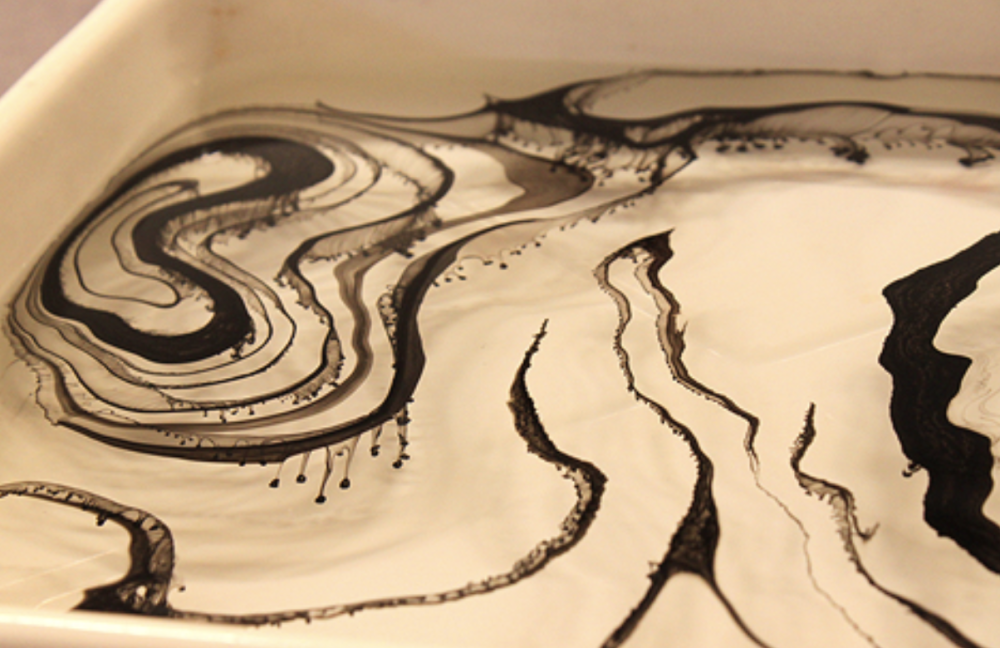 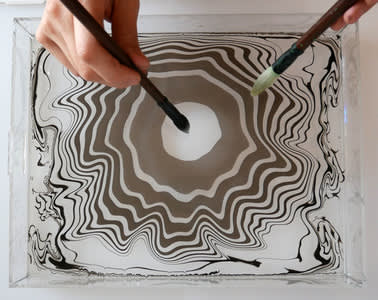 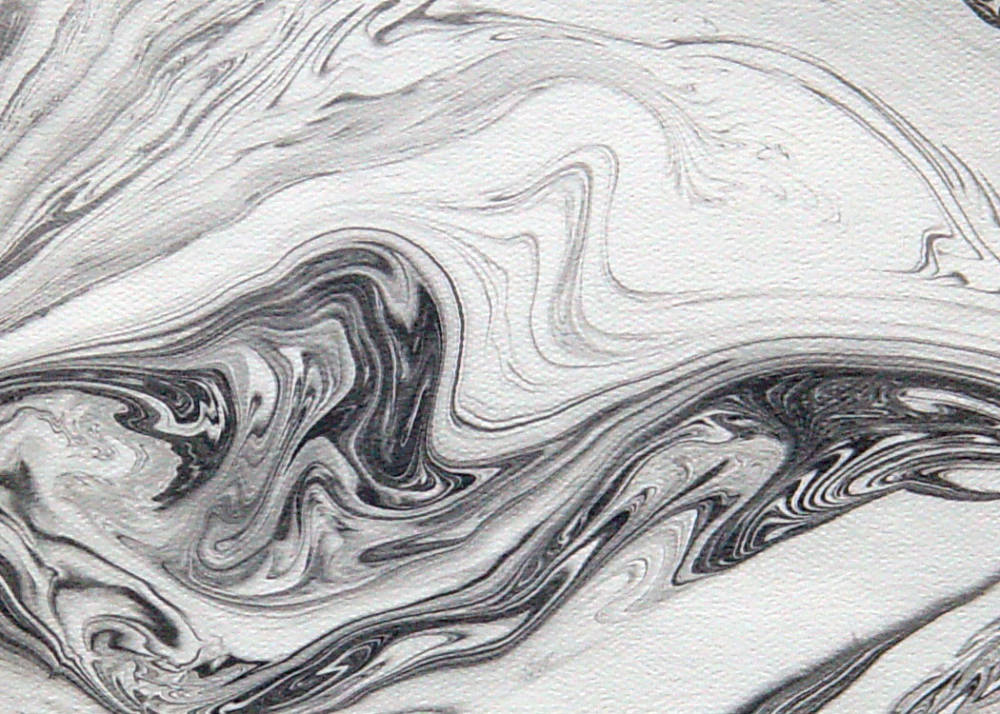 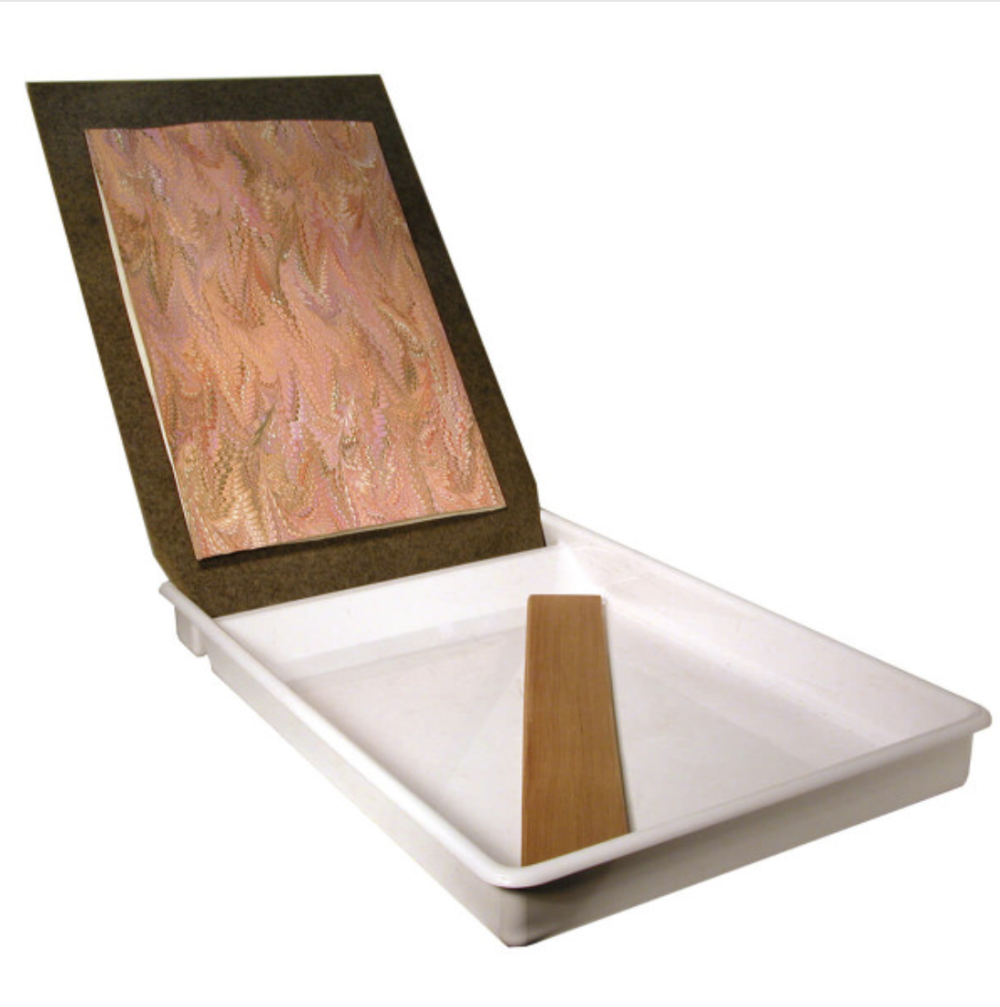 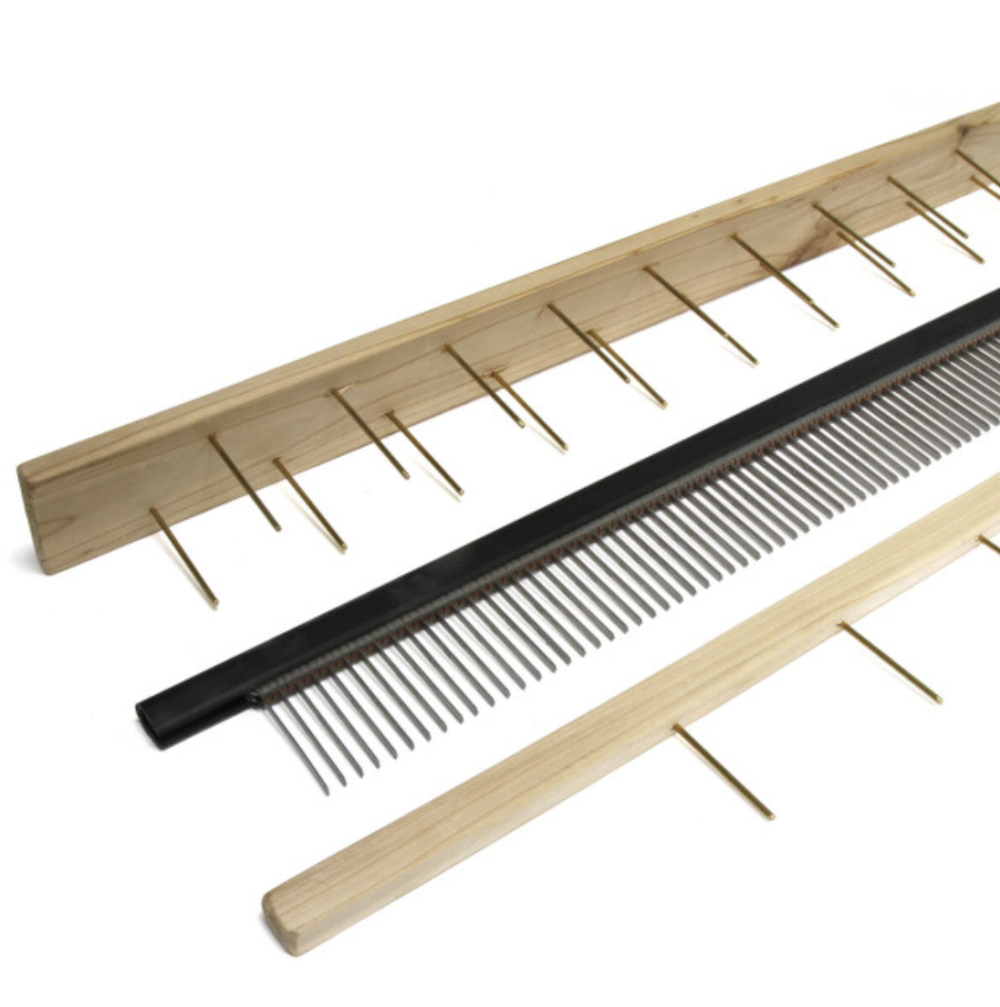 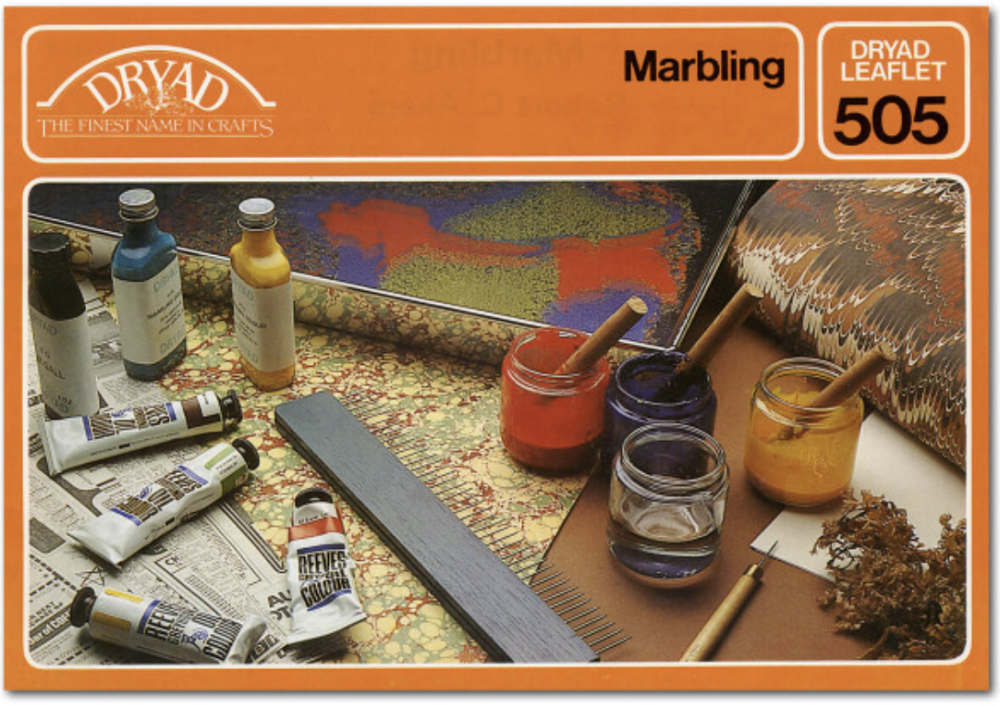 In Europe in particular, the art of marbling became synonymous with the art of bookbinding. Books that featured marbled motifs on the edges of their papers were thought to be secure, as the removal of any of pages would disturb the colorful patterns, therefore signaling an intrusion. These artisans kept a low profile, but developed guilds in the early modern world, in addition to teaching apprentices. As marbling was marked as a rather mysterious art, it became so desirable that both English and French authors felt the need to include these ornate papers in Enlightenment-era encyclopedias. 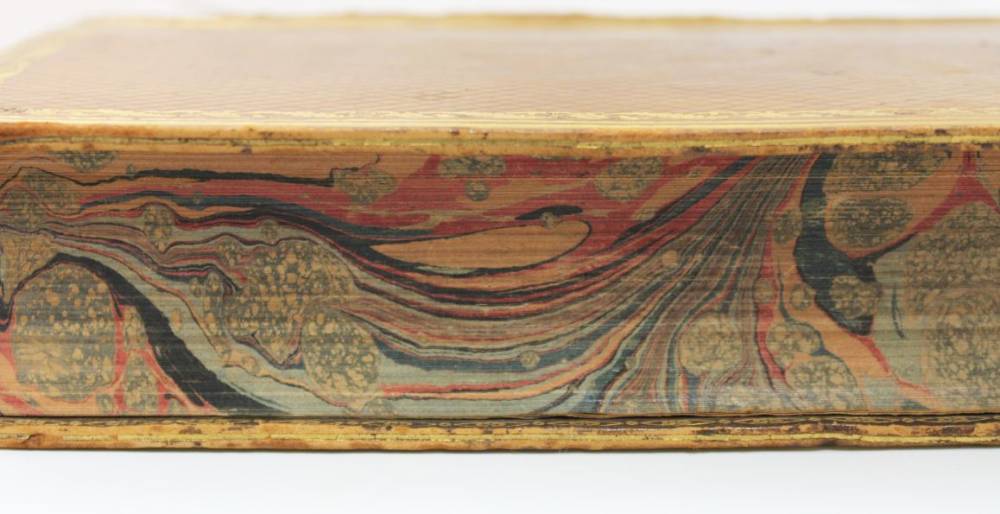 In 1853, British author Charles Woolnough demystified the ancient craft by writing ‘The Art of Marbling,’ a how-to book exposing the obscure techniques, such as paint components and necessary ingredients, required to execute various methods of marbling. Woolnough’s writings, while allowing for the art to become increasingly widespread, revealed interesting distinctions in cross-cultural marbling seen in the various techniques employed to render desired patterns, and the different papers used to absorb the floating pigments. Japanese Suminagashi, for example, can be differentiated from Turkish marbling, known as ‘Ebru,’ while French examples prioritized a ‘curl’ technique – where the marbling artists used a rod to spiral the paint into a central point – and Venetian artists became recognized for their peacock patterns resembling the plumage of a peacock tail. 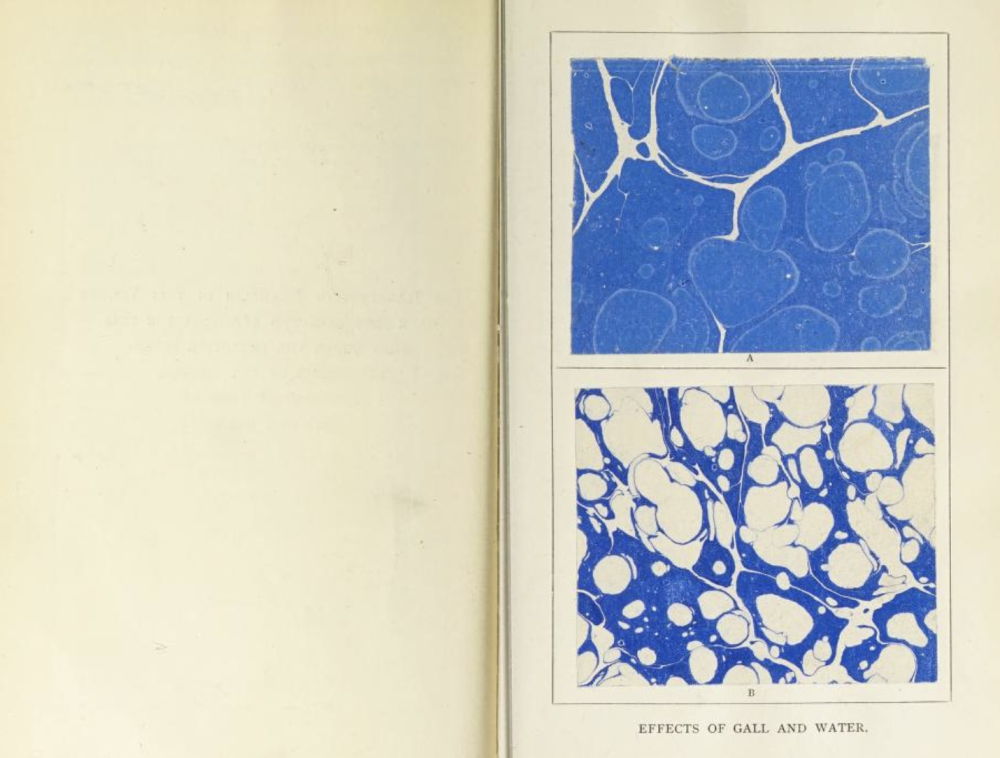 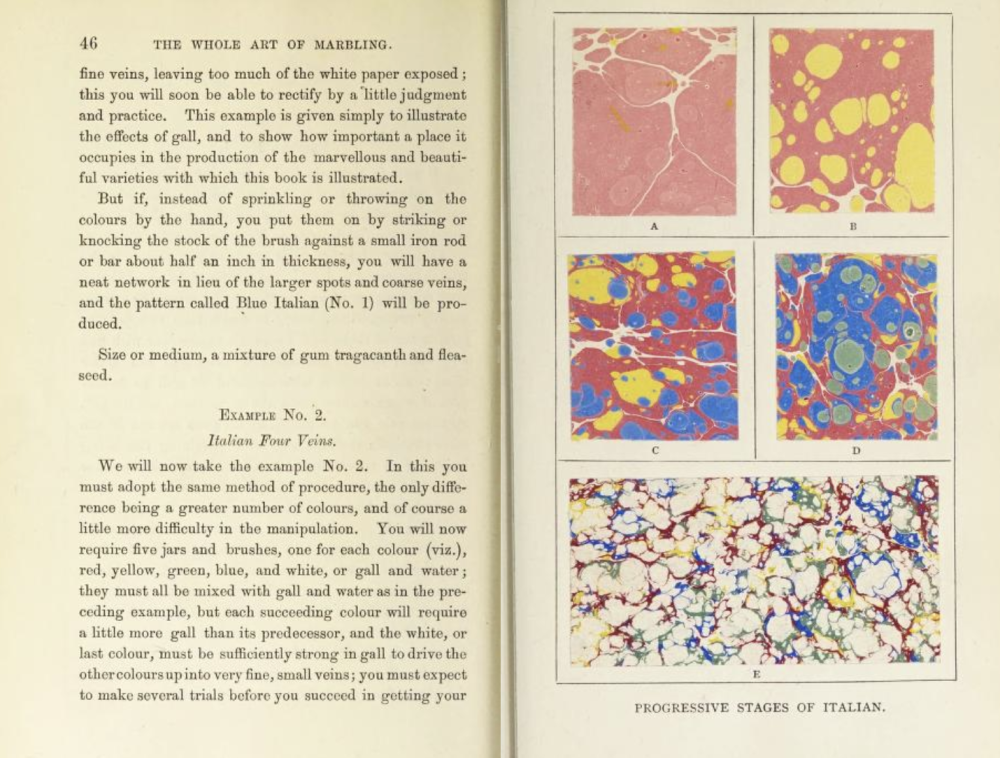 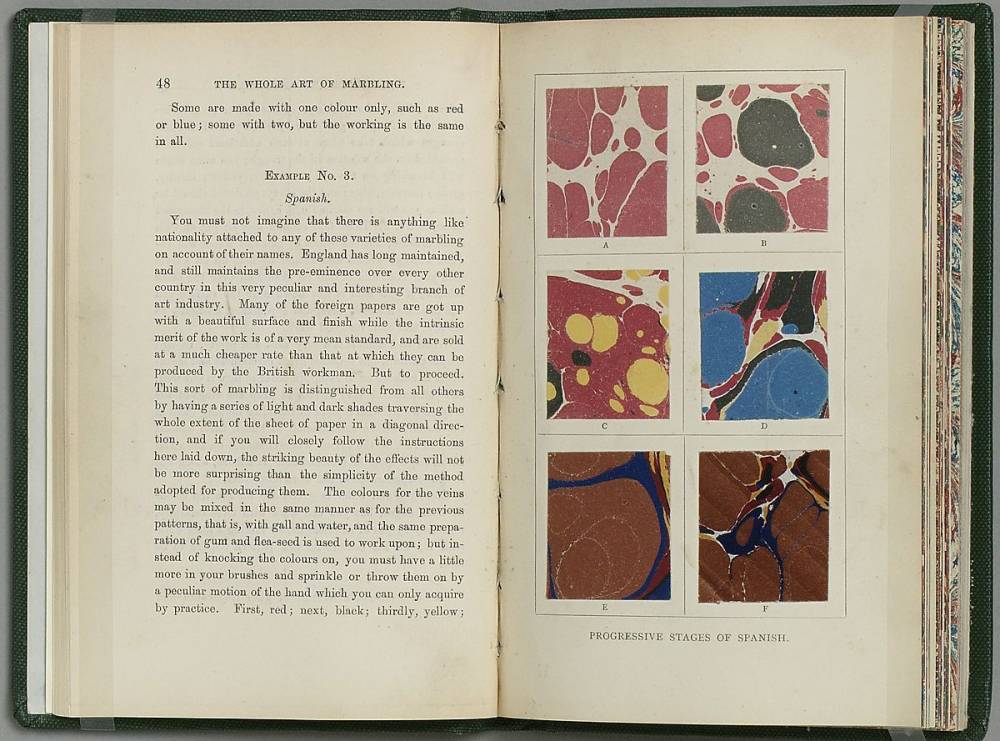 Soon after the publication of Woolnough’s text, industrial methods of marbling became widespread, making mass production of these designs possible. As such, in the mid-19th century modern notebooks with marbling patterns began to appear throughout France and Germany, eventually making their way to the Americas in the late 1800s. The speckled marbling pattern most westerners recognize today, often found on the exterior of class notebooks, is referred to as the ‘agate pattern,’ named for its unique visual properties and similarities in appearance to agate rocks. Agate, which is a species of rock whose natural interiors have a marble-like design, became the inspiration for the marbling pattern found on 1980s and 1990s-era composition notebooks. In fact, this nostalgic motif quickly became a branding mechanism throughout Western culture, one that Minnie Muse has embraced for the design of our own notebook.

By virtue of ‘riffing’ on age-old techniques and iconic visuals of the past through a hopelessly modern lens, the MMerch CoMMposition Notebook includes a charcoal grey agate pattern cover design, secured by Minnie Muse Red thread and a complimentary cloth binding. Marbling has become an iconic visual symbol, whether in relation to the ancient artistic practice of marbling or contemporary consumer culture. In true Minnie Muse fashion, the MMerch CoMMposition Notebook pays homage to both interpretations, the agate print begs for association with widespread recognition while maintaining relations to the historic narratives of paper marbling.