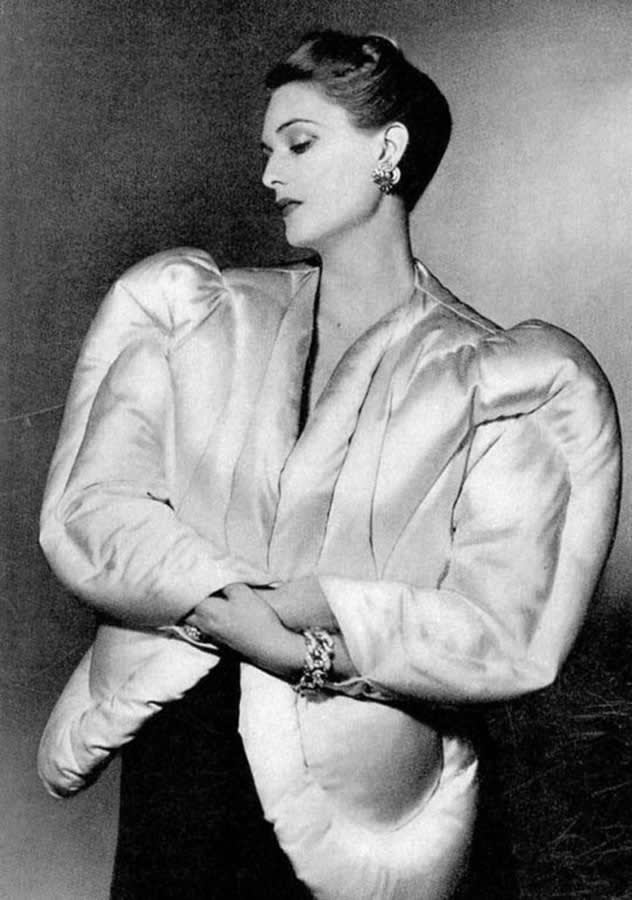 There is no greater feeling of comfort than that provided by one’s own bed. The warmth and interior composition of a down blanket lead to the creation of the first puffer jacket in 1936 by outerwear empresario, Eddie Bauer. The Skyliner, as it became known, was the world’s premiere puffer jacket. Bauer, eager to develop a viable alternative to the insulation provided by bulky wool garments, offset the sizable nature of a down feather-filled interior through quilting the garment’s outer shell, providing wearers with an optimal level of warmth and agility never before seen in the context of outwear.

Countless iterations of this iconic garment have popped up through the decades on notable runways such as Alexander McQueen and Schiaparelli. For fall/winter 1999 McQueen showed an almost identical version of James’ original jacket, with the addition of an extended, knee-length hemline, while the fall/winter 2016 runway of Schiaparelli couture showed a similarly elevated cropped puffer jacket, with exterior quilting denoting a butterfly, in reference to Schiaparelli’s belief that butterflies symbolized freedom. 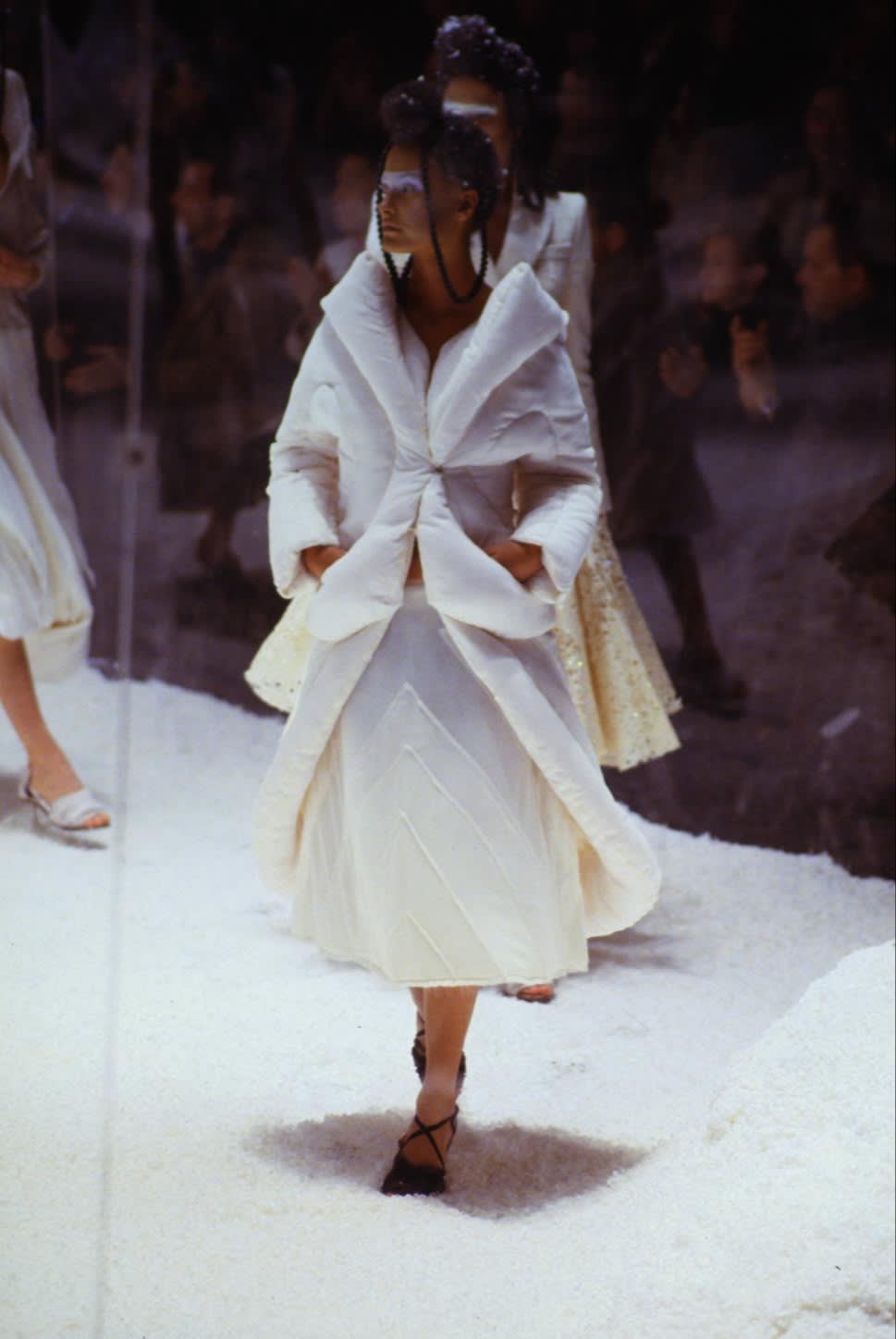 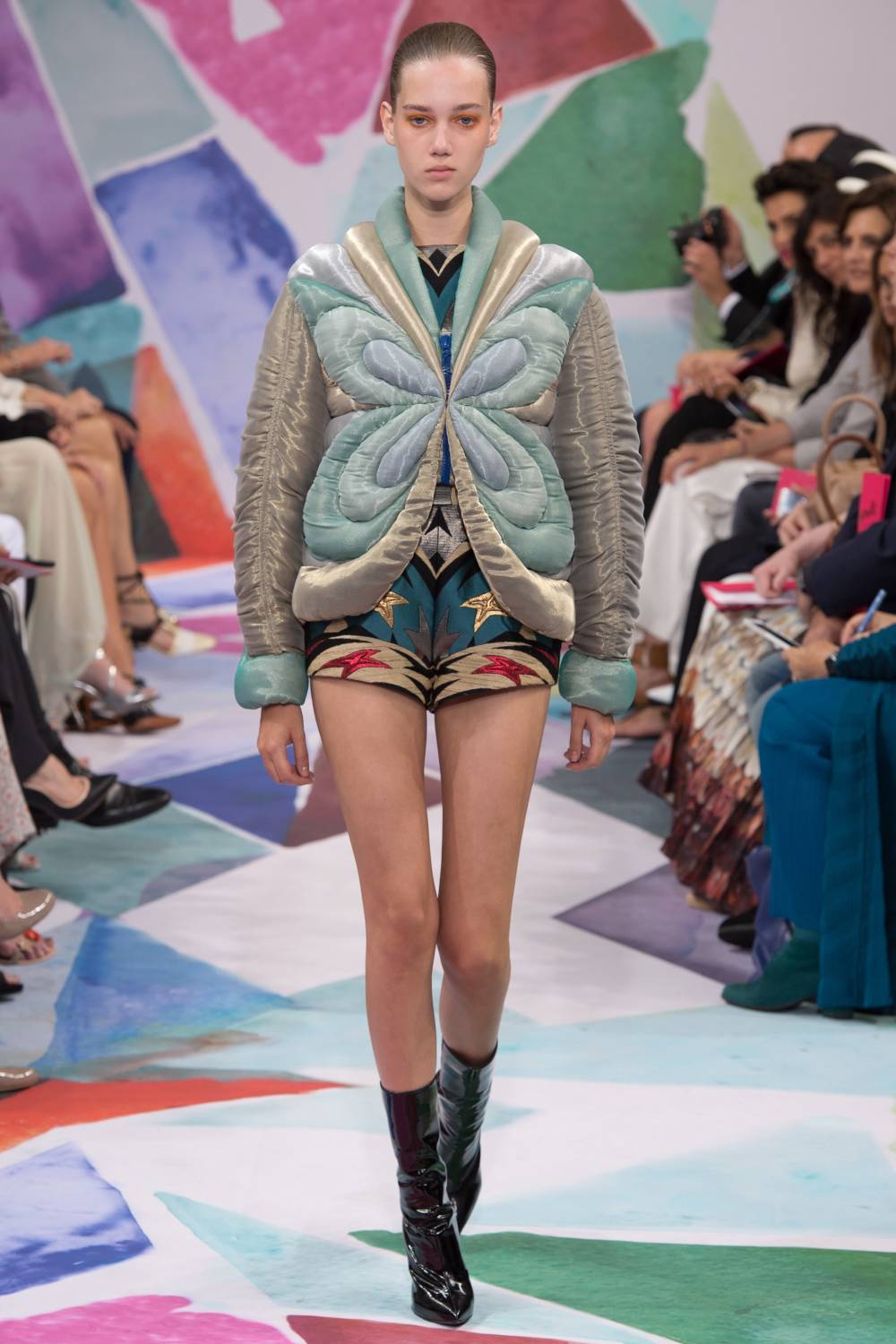 A number of less traditional outerwear designs have also been deeply influenced by the original down jacket. In the 1970s American designer Norma Kamali released her iconic ‘Sleeping bag Coat’. The original jacket was created using actual sleeping bags sewn together, which soon evolved to include two sleeping-bag-like layers, with a synthetic alternative imitating the effects of down placed between, leaving the wearer’s warm body incased in a fully insulated vacuum of heat. 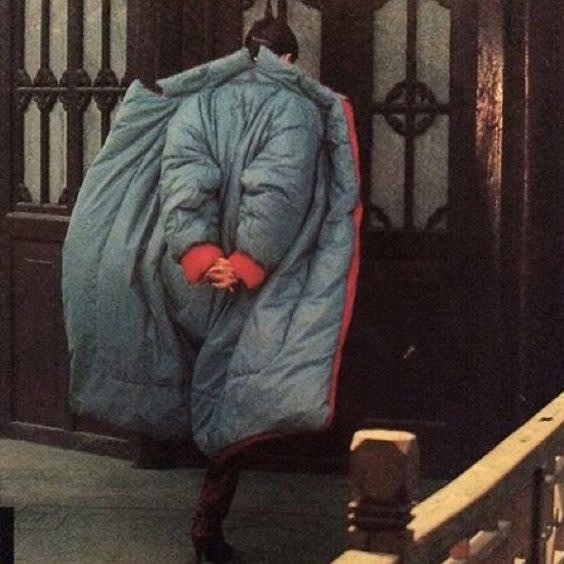 In 1999, Martin Margiela, the designer who many credit as introducing the contemporary manifestation of a duvet jacket into high fashion, approached this decades-old construction technique with a conceptual mind. Margiela fabricated a literal interpretation of the original coat’s inspiration, introducing a down-coat that mimicked the appearance of a bed duvet. Margiela’s duvet coat has since become a trademark of the house, so much so that current creative director John Galliano enlisted this concept for the bridal look of his fall/winter 2015 artisanal collection, showing a duvet-inspired wedding dress. Galliano further expanded on the bedding trend for spring/summer 2018 when he introduced puffy clutches in the style of travel pillows.

The single most literal interpretation of a high-fashion duvet jacket imitating actual bedding was in the opening and closing looks of Viktor and Rolf’s fall/winter 2005 ready-to-wear collection, titled ‘Bedtime Stories’. The Dutch designers styled pillows behind models’ sprawled out hair, as if they had been photographed from above mid-slumber. 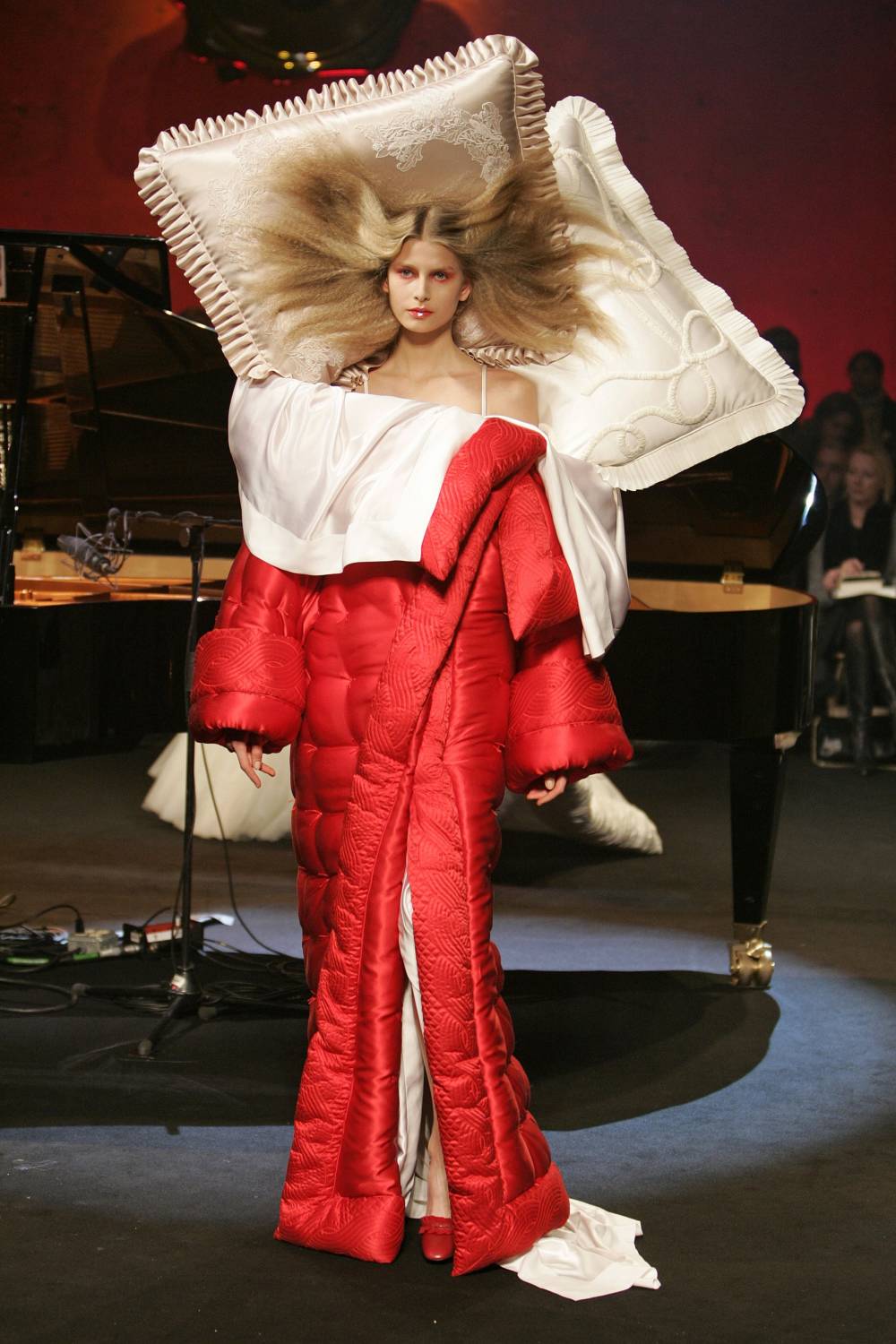 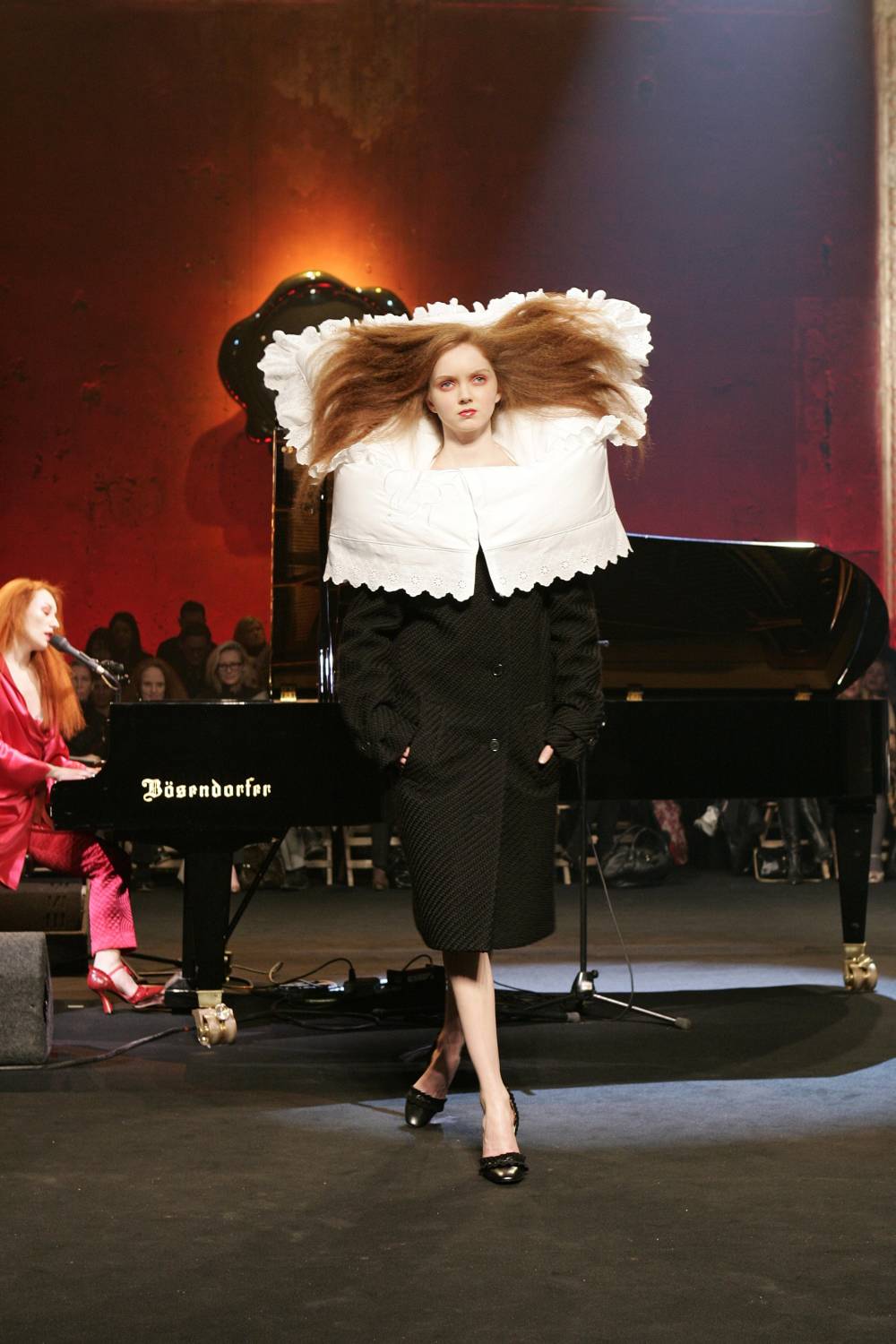 The foremost example of a bed duvet appearing in the context of fine art is unmistakably Tracey Emin’s ultra feminist, autobiographic work ‘My Bed’. First created in 1998, the work’s painfully honest and broody depiction of Emin’s life, overcome by depression, random sexual encounters and alcoholism, includes stained sheets, a wrinkled duvet, and piles of empty bottles and trash. The work has become the British artist’s most renowned and widely recognized piece to date. 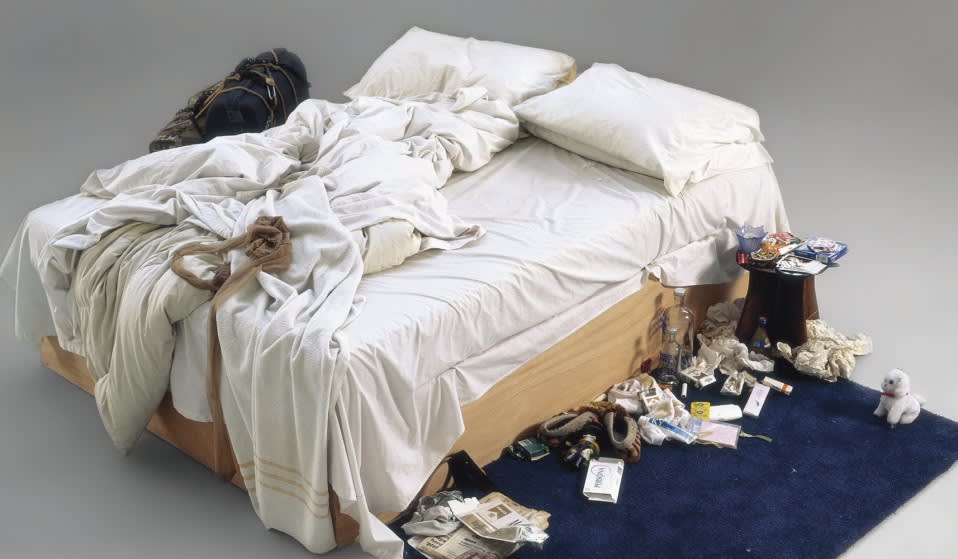 While Emin quite literally depicts the physical nature of her bed in a work of art, many artists have famously created artwork within the confines and comfort of their own bed. Towards the end of his life, Henri Matisse became somewhat of an invalid following a number of health-related complications and operations. Forced to spend much of his day in bed, tucked under a warm duvet, Matisse turned his bedroom into a factory of creation, painting on the surrounding walls using an extended brush, at which time he also began his expansive series of cutouts. With a pair of scissors and a stack of colorful construction paper, Matisse produced some of the most iconic works from the latter half of his life, all from the comfort of his own bed.