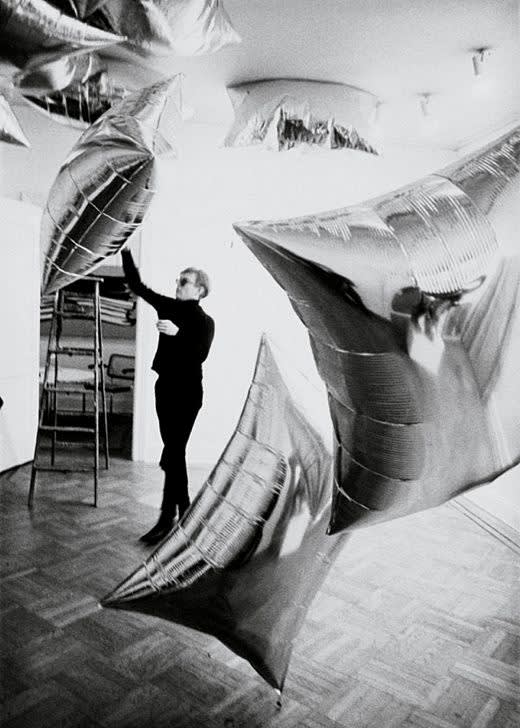 Birthday balloons and pool floats, bouncy castles and air mattresses, there is no denying that inflatable objects have an eternally youthful spirit. What is not as widely acknowledged is the medium’s ability to be utilized in a sophisticated context.

The foremost example of inflatable art occurred in 1966 with Andy Warhol’s “Silver Clouds”. The floating silver rectangles made of metalized polyester film and filled with helium, were a collaboration between the Pop-artist and electrical engineer, Billy Klüver. Warhol’s “Silver Clouds” were first exhibited at the Leo Castelli Gallery in New York City in 1966 as part immersive installation, part participatory experience, with the movements of the viewer's bodies causing the work to continuously evolve. Warhol’s artistic career was built around glorifying the banalities of everyday life through imagery. The “Silver Clouds,” while complex in construction, prompted a comparable interaction as experienced between human and balloon, transforming the most youthful of pastimes into an artistic experience.

At the onset of Jeff Koons’ prolific career, he produced a series of readymades using small inflatable toys and found objects. Koons sought to expand on Marcel Duchamp’s dialogue on the objective, affirming the impulse that art exists everywhere. The concept of the readymade is about rendering beauty in the mundane, and the recognition process associated with such an act. Jeff Koons’ artistic statement on modern thought is evident in his use of esoteric subject matter, like an inflatable toy. Demonstrating that beauty is in the eye of the artist.

Since Gareth Pugh’s graduation show from Central Saint Martins in 2003, where he used balloons as a primary medium throughout his collection, inflated clothing has become a signature of his; Pugh's designs often include inflatable elements in the forms of voluminous outerwear and accent pieces, giving his garments exaggerated volumes while maintaining lightness. In 2008, like-minded experimental designer Martin Margiela took a slightly more intentional approach towards the inclusion of inflatables in his collection, when he produced a ‘Balloon Vest,’ made of 30 intertwined balloons of varying volumes.

A large contingent of Japanese designers began incorporating inflatable components in their clothing designs back in the 1980s. Most famously, in 1987, Issey Miyake produced an inflatable rubber jacket with two blow-up tubes located on the chest. The design was such a success that over the years Miyake has reissued the style and idea in different variations. Around the same time, Michiko Koshino, who began her career in menswear, introduced an inflatable raincoat, inspired by b-boy duvet jackets lining the pages of Vogue. Koshino became known for her futuristic offerings influenced by the streets as well as traditional Japanese culture, and continued to incorporate inflatable elements in her fashion designs throughout the 80s and 90s.

On a mass-market level, in 2001 C P Company, an Italian apparel corporation well known for their functional outerwear and experimental use of materials, produced a collection titled ‘Modern Nomad Designs’. The unique grouping of items included pieces for the modern nomad, accounting for practicality as well as urban utility, with all items being transformable through inflatable elements. The collection included both a hooded jacket that inflated into an armchair as well as a parka that could inflate into an air mattress.

Inflatable furniture rose to popularity in the latter half of the 1960s and early 70s, following the success of the Blow Armchair by Italian design collective De Pas d'Urbino Lomazzi. The transparent chair was the first mass-produced, commercially successful piece of inflatable furniture. The Italian trio utilized avant-garde materials and technology, suggesting for the first time in history that furniture was no longer required to last a lifetime. It’s colorful PVC collapsible shell embodied the nomadic, free spirited nature of the 60s and 70s. The chair’s unconventional use of materials and radical design made the piece both affordable and an instant hit. The Blow Inflatable Armchair has since become an iconic piece of Pop furniture, forever impacting the future of seating design. 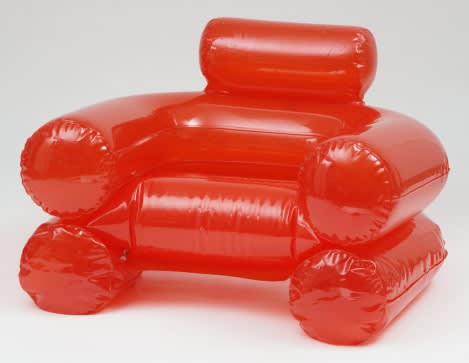 The 1960s and 70s experienced a recurring motif of mobility, subject in the overall free-spiritedness of the decade’s youth. Michael Webb, of avant-garde British architectural group Archigram, took notice of this trend and developed two inflatable home concepts known as the Cushicle and the Suitaloon. The Cushicle, invented in 1964, was an inflated envelope for the body, created as part of Archigram’s obsession with urban mobility. The Cushicle’s aim was to provide the complete comfort of a traditional home in an entirely convertible environment. Three years later in 1967, an improvement on the Cushicle was developed and named the Suitaloon. The Suitaloon was a minimalist take on bubble architecture, containing the bare minimum of amenities, all within a personalized bubble that could be erected anywhere and easily deflated to be moved. Unlike the Cushicle, the Suitaloon considered the communal side of living in an urban setting and contained a plug for users to connect to other suit-homes. Both designs were embodiments of Webb’s obsession with prefabrication, modularity and transparency, as well as flexible, durable materials. 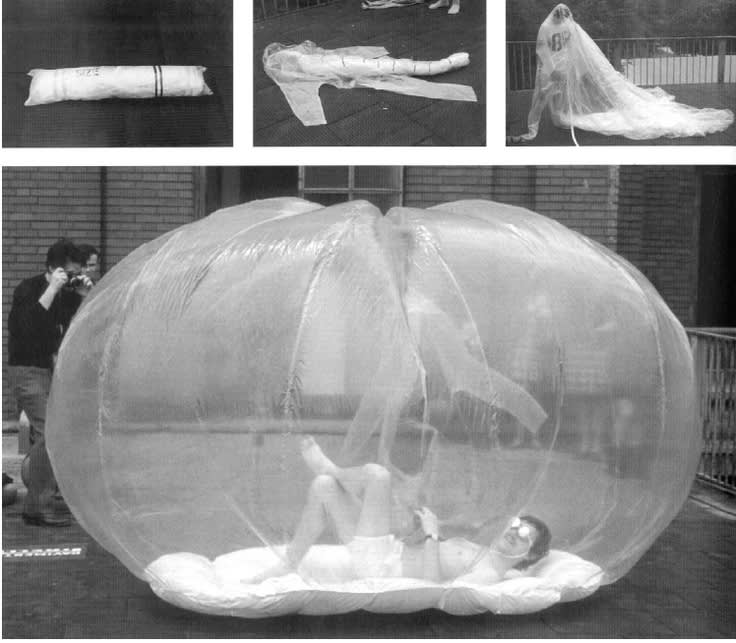 In 1971 the Space Lib movement infiltrated, or rather inflated, Palm Springs, with air-supported domes of roughly 500 square feet popping up around the dessert. The concept of Space Lib represented a liberation of spirit and connectedness with nature. Similarly, the Instant City, realized in 1971 by Spanish architect José Miguel de Prada Poole, was an entirely flexible metropolis that could inflate and be installed anywhere with enough land, personifying the ideologies of a completely mobile city.

Inflatables have quite literally blown up over the past six decades. From clothing and art, to furniture and architecture, there is a large enough variety of inflatables on the market to satisfy every desire. 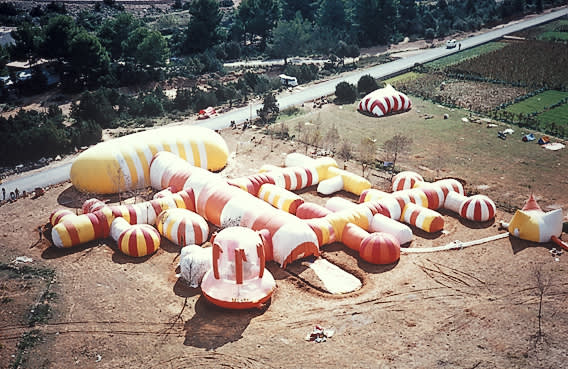 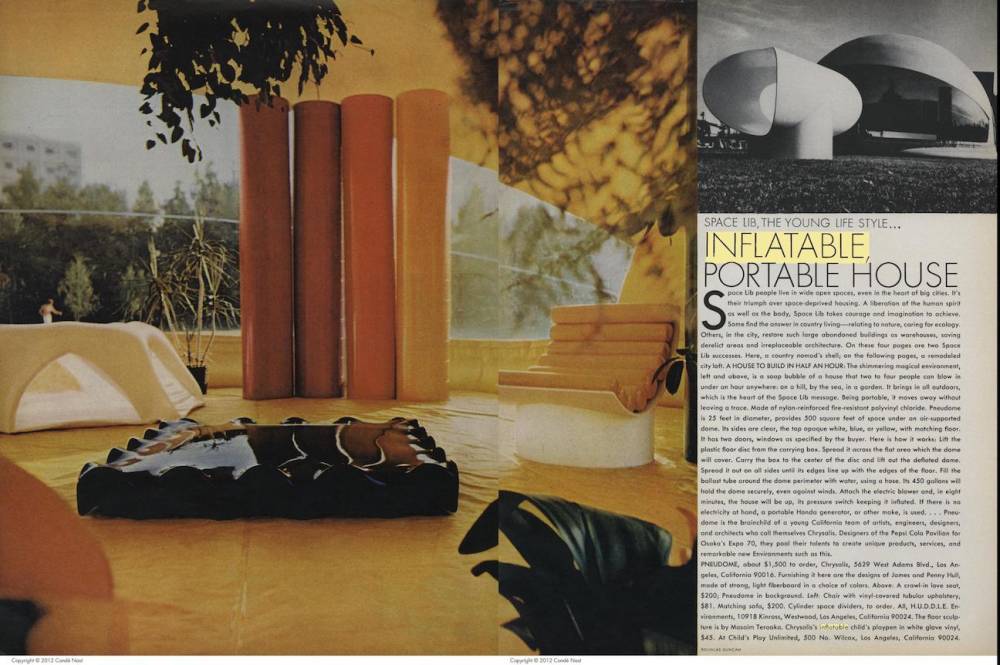