Patchwork refers to a type of needlework in which small, often square or triangular, pieces of fabric or cloth are stitched together. The individual pieces typically contain contrasting colors and patterns to make quite a dramatic whole.

Patchwork in high fashion was popularized in the late 1960s when Yves Saint Laurent began experimenting with this construction method using rich brocades and colorful moiré. The French fashion designer created countless patchwork gowns throughout his career, so much so that former Saint Laurent creative director Hedi Slimane paid homage to this technique for spring/summer 2015, simulating patchwork on a bejeweled and bedazzled mini dress.

That same season, Miuccia Prada presented a heavily patchwork-focused collection for Prada, showing dresses and coats of substantial pieces of contrasting brocades sewn together. Back in 2002 while at the creative helm of the house of Balenciaga, Nicolas Ghesquière showed a series of slightly irregular patchwork dresses, configuring atypical shapes atop one another, all while interspersing chainmail elements and ornamental metal tassels. Most recently, a far more traditional method of patchworking was shown on the fall/winter 2017 runway for Alexander McQueen. Sarah’s Burton’s patchwork prints of needlepoint and scarves on long dresses with handkerchief hemlines were both classic and modern.

Switching gears back to Yves Saint Laurent’s patchwork couture gowns of the late 1960s, similar techniques were employed by two separate design houses in their spring/summer 2017 couture collections. Both the house of Schiaparelli and Dolce and Gabbana Alta Moda showed highly technical patchwork gowns, with complex shapes of contrasting fabrics layered together to create a beautiful, abstract whole.

Although these patchwork couture gowns are themselves works of art, they embody a sumptuous spirit originally attributed to Austrian symbolist painter Gustav Klimt. Through the allusion of rich patchwork surfaces crafted in each one of his ornately rendered canvases and mosaics, Klimt created a style uniquely his own that continues to be imitated and reproduced.

Other artists have utilized this hand-sewn craft through mediums such as wall hangings and tapestries. Japanese designer Issey Miyake worked closely with artist Tim Hawkinson on a series of dresses for Miyake’s ‘Pleats Please’ line, of which Hawkinson then took the designs and made a large patchwork curtain, titled “The Pneumatic Quilt”, for an Issey Miyake exhibit at Ace Gallery in New York City in 1999. Also in the 90s, late artist Mike Kelley utilized this technique of collaging fabric and created a sculpture made from patchwork panels of vintage sweaters from the 70s and 80s. More recently, artist Richard Prince released a limited edition rug of vintage patchworked sports jerseys, a somewhat subdued and livable way of incorporating patchwork in one's home.

On the entirely opposite end of the patchwork spectrum of ‘livability’ is Gloria Vanderbilt’s New York apartment in the 1970s. The wildly eccentric Vanderbilt designed a living space entirely engulfed by patchwork, from the floor, to walls, to ceiling and bedding, every square inch of surface area was so perfectly covered in a variety of patterns, colors, shapes and textures. Her curtains almost appeared to be made of the same run of patchwork as Yves Saint Laurent’s gowns from the late 60s, of which Mrs. Vanderbilt so perfectly wore a similar style of at home, taking the concept of ‘dressing for your environment’ to an entirely new stratosphere. 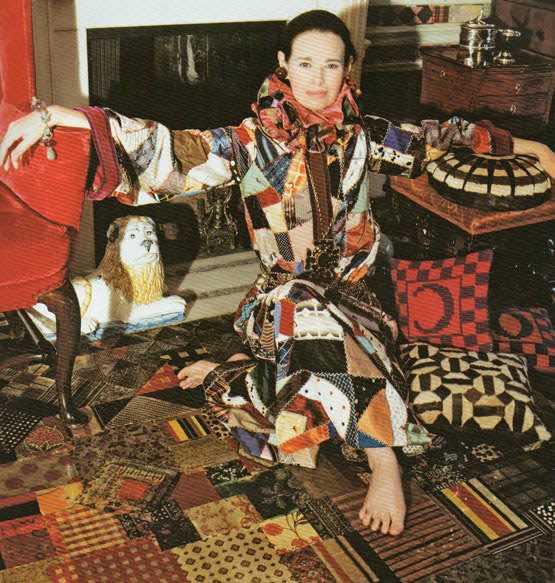