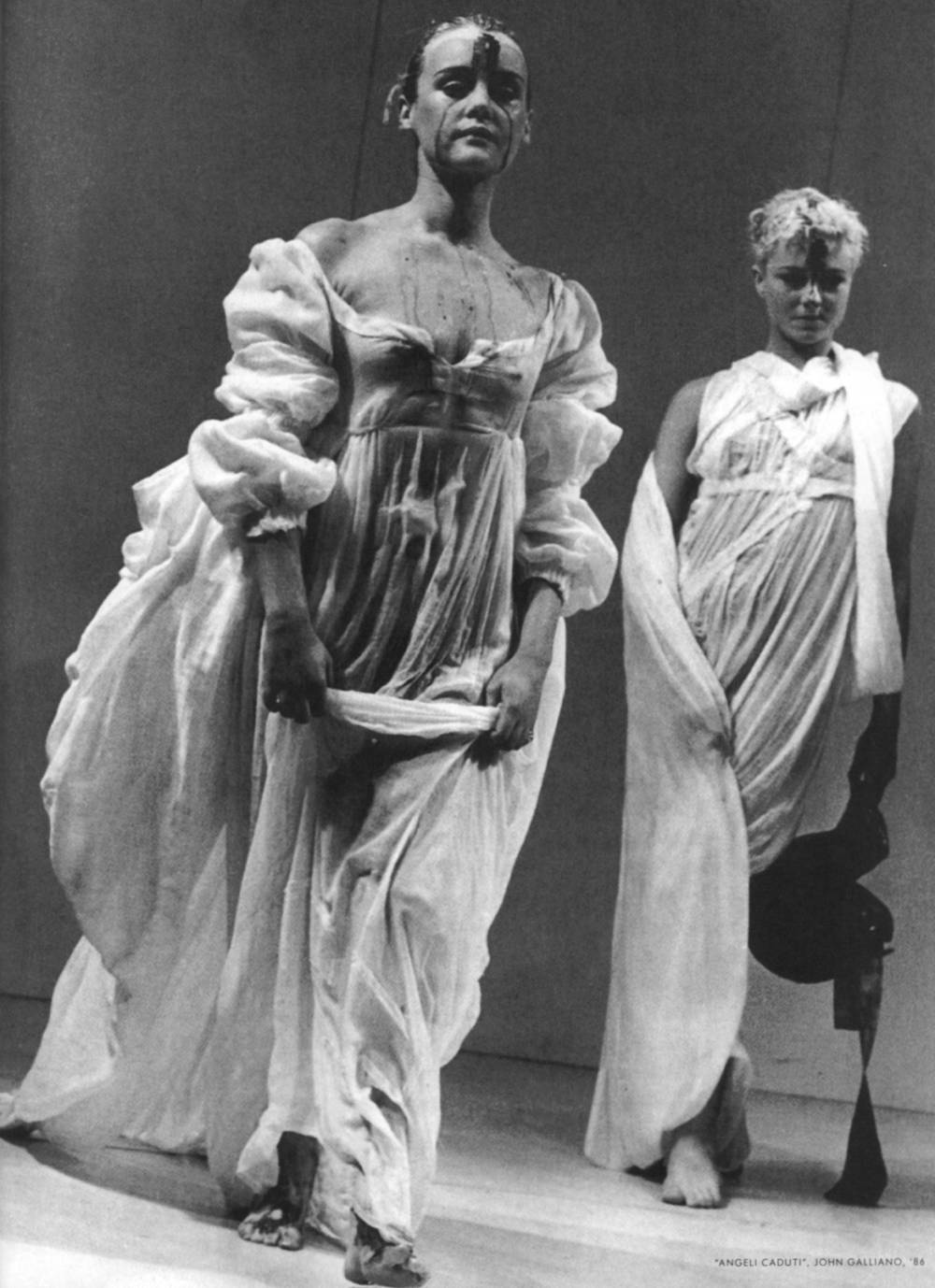 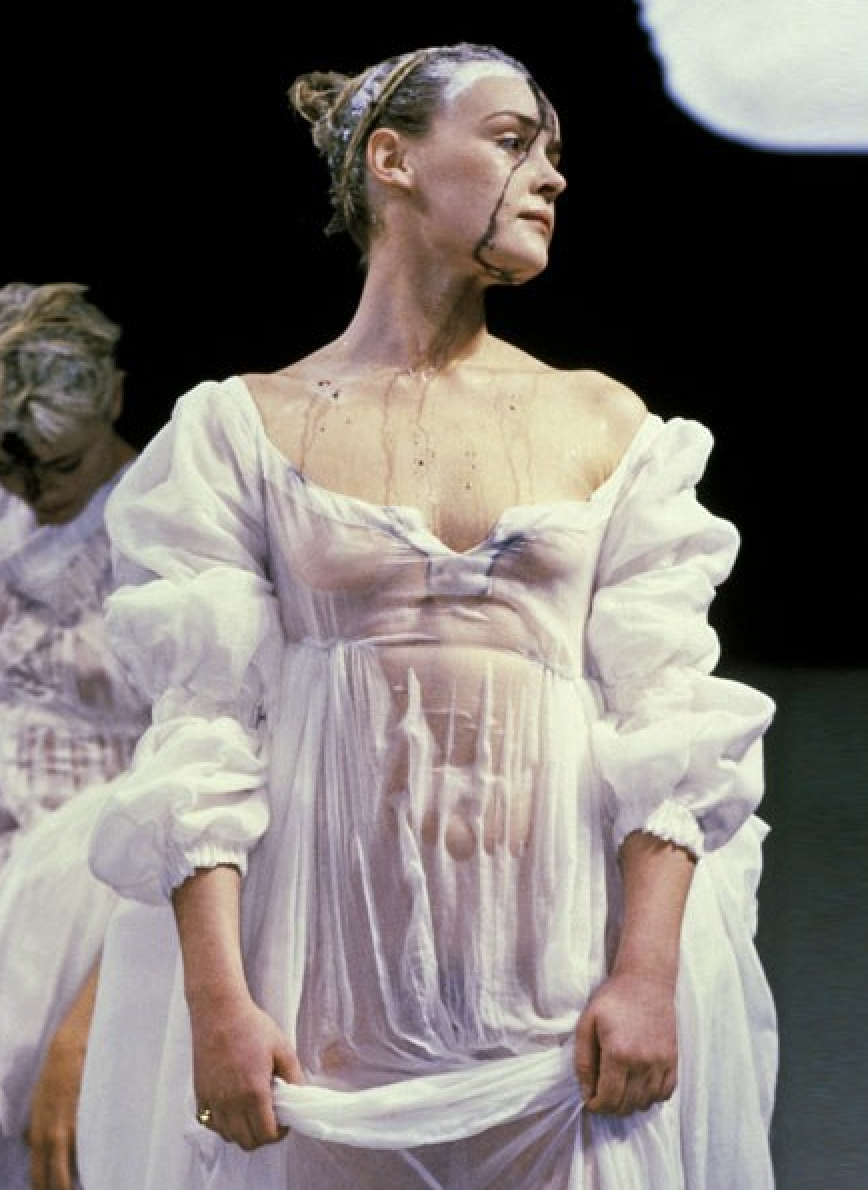 John Galliano’s Spring/Summer 1986 collection, entitled “Fallen Angels,” took obvious inspiration from post-revolutionary France, a time in which the extravagance of the monarchy was rejected in both political and cultural terms. As a result, the French – and by extension, Galliano’s collection – turned their aesthetic taste to the simplicity of ancient Greece and Rome. However, the show’s finale — in which Galliano doused models in water, making their light chemise ensembles completely transparent — sought inspiration from “Muslin Disease,” a myth which raises questions of frivolity, morals, and misogyny, that extended well beyond post-Revolutionary France and into much of fashion history.

In the years following the French Revolution, popular fashion took on a reactionary stance. Rejecting the opulent dress of the monarchy, epitomized by Marie Antoinette’s famously wide silhouettes, expensive fabrics, and intricate head pieces, French fashion turned back to the styles of antiquity. For the next quarter of a century, fashion would see layers condensed, fabric becoming lighter, and waistlines rising. Simplicity ruled and intricate details were dismissed.

The introduction of the chemise style dress – a classic smock otherwise known as a modern type of female undergarment – coupled with the fading popularity of separate inner and outer layers, and the rise in demand of cheaper, lighter materials like muslin, all characterized the time as one of change and progression. This is an especially interesting annecdote as the trend of inexpensive materials permeated throughout the upper class, effectively demonstrating the “trickle up” effect, in which high fashion appropriates the dress of the working class. Call it a 1790s version of the ‘Yeezy’ movement.

The a la mode women of the day, particularly in Paris, were called “Merveilleuses” in the last half of the 1790s. These women, like fashionistas today, took popular dress to the extremes. They wore lightweight, almost sheer fabrics that revealed their figures and hints of skin. In lieu of a corset, Merveilleuses wore pink bodysuits to create the illusion of nudity under their chemise. 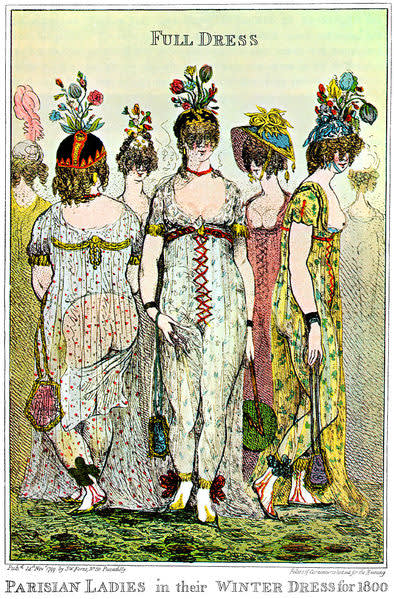 “Muslin disease,” as supported by historical documents, refers to the epidemic of deaths among these women in Europe, especially in France during the Winter of 1803, most liekly due to pneumonia from exposure to the cold weather. The mythical lore that has circulated around the “muslin disease,” phenomenon, however, follows a precedence of fashion-related mythical illnesses that framed fashion as dangerous to public health, and those who partake in it as frivolous. 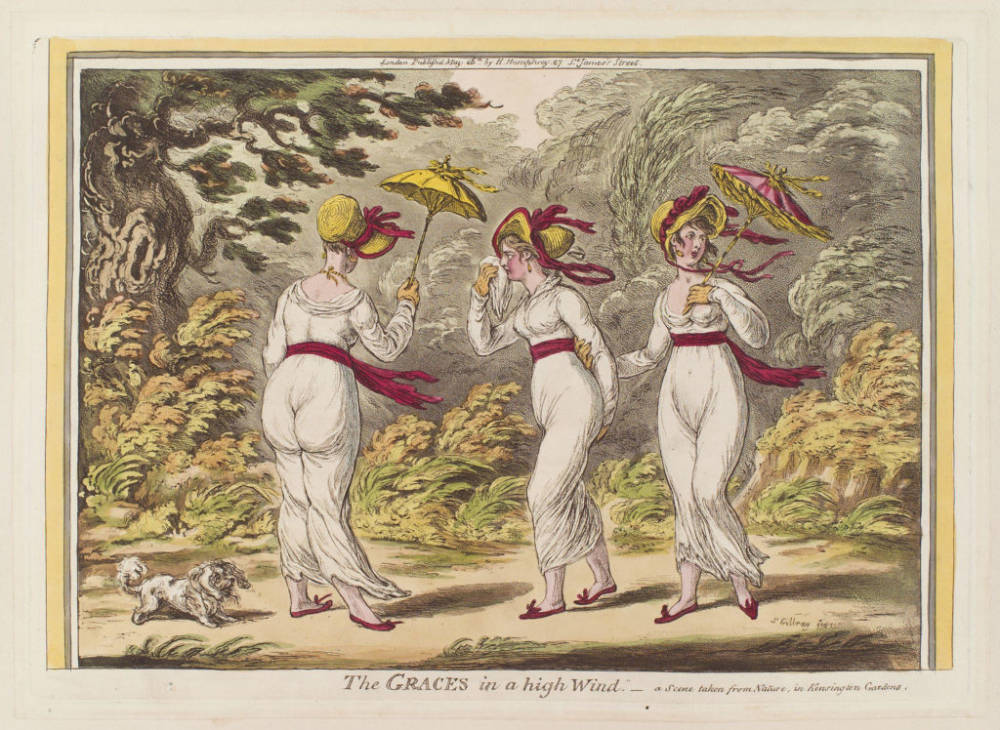 The graces in a High Wind, Women effected by Muslin Disease, 1800s

The lore claims that women would douse themselves in water before leaving the house, causing their thin chemises to cling to their bodies, thus showing off their newfound sexual freedom and, by extension, freedom of dress. In reality, there is no historical backing to this, and the myth probably started as a result of the satirical images and writings mocking women’s fashion at the time. 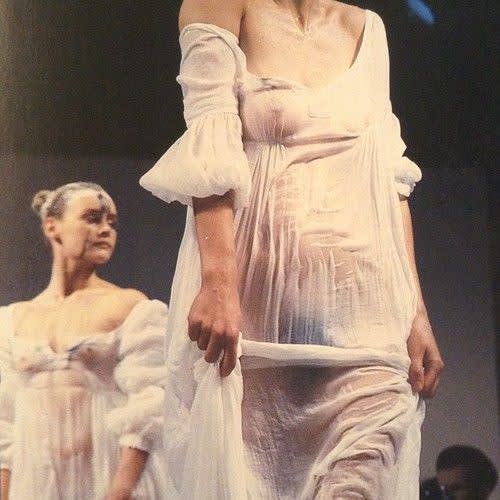 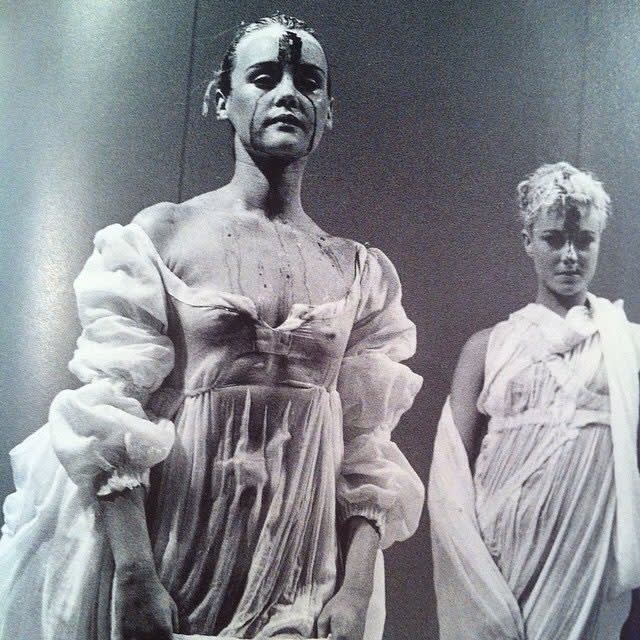 This public mockery of fashion and, more pointedly, women, is plentiful throughout fashion history and often in collaboration with medical myths. Valerie Steele’s “The Corset: A Cultural History” documents the copious legends surrounding corsetry; from the ‘17-inch waist’ to the removal of ribs, most of which have little to no historical proof. 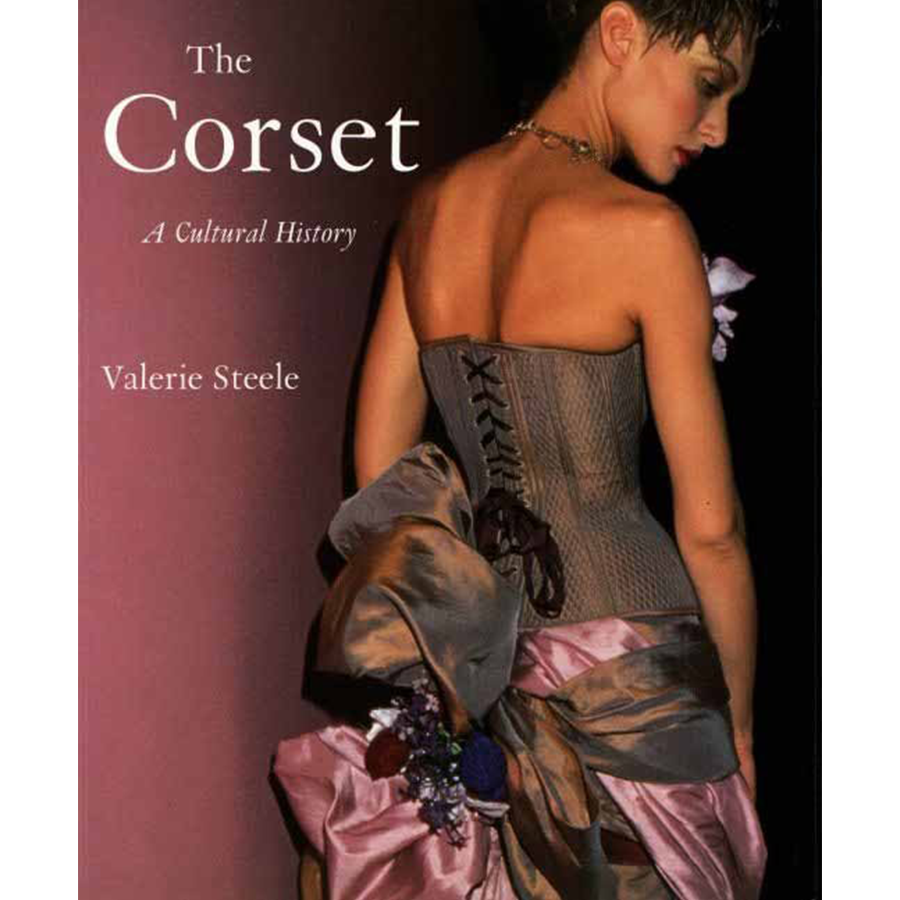 The Corset A Cultural History, 2001

Nonetheless, the practice of satirical images mocking women, unfortunately, still exists today. The internet is littered with articles criticizing every practice of dress, from the most extravagant examples to the low-effort minimalists. Still, fashion pushes on as a subversive practice that helps us analyze and critique history. Galliano’s collection is a perfect example of this ideologly, asking us to consider both the historical style of dress as well as its consequences. 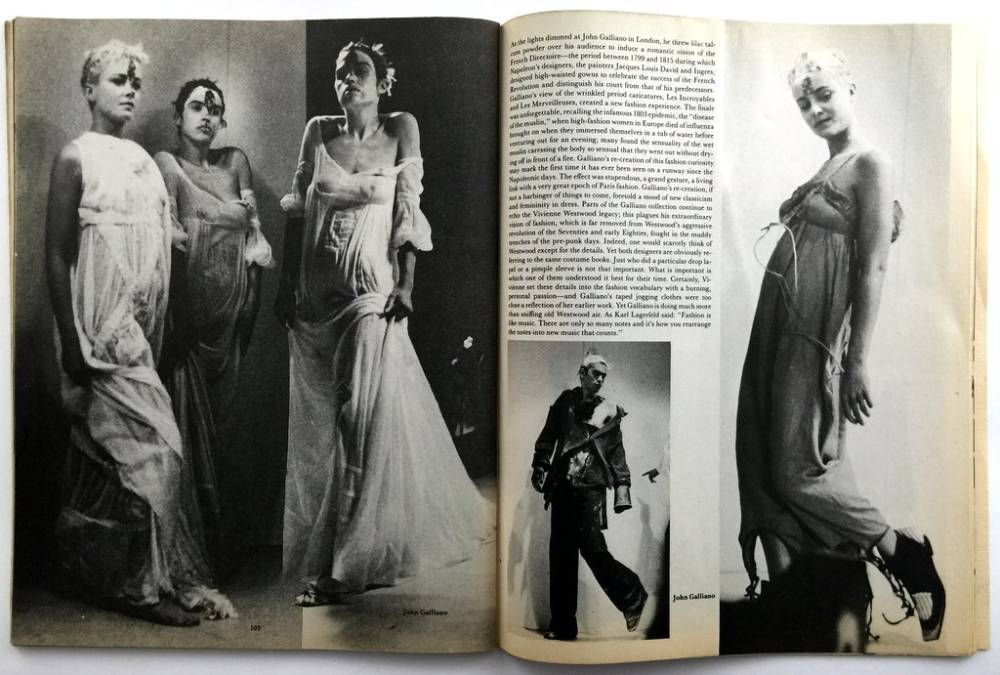