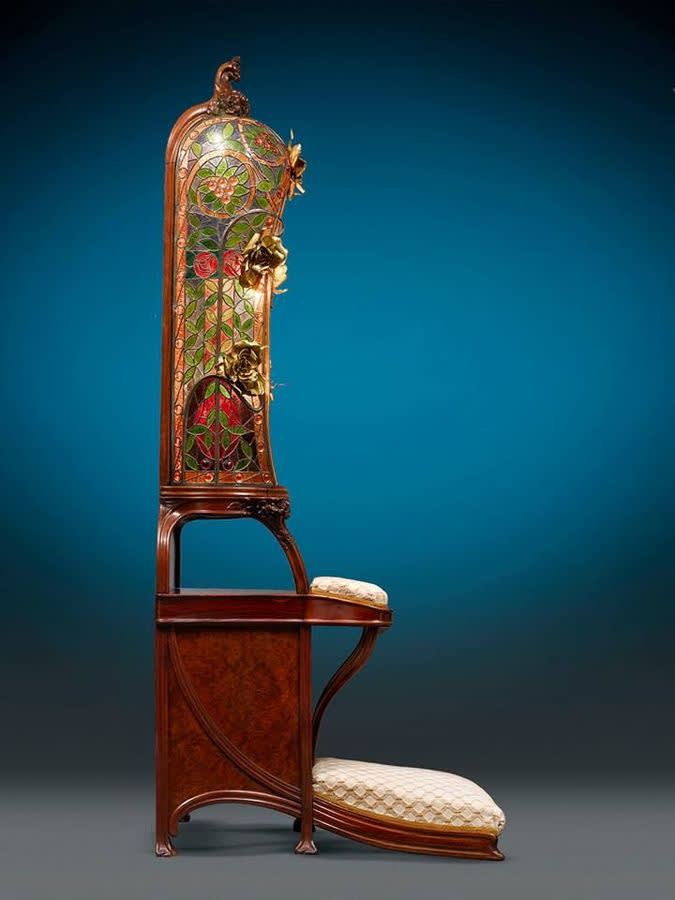 The world of architecture has long understood the importance of a well-rounded, all-encompassing vision, with its ornamental counterpart rooted in the design and development of furniture. For as long as architects have been crafting buildings, they have explored the art of furniture design as a means of self-expression, utility, and downright necessity.

While the structures designed by late 19th century architect Antoni Gaudi – a figurehead of the Art Nouveau movement in his native country of Spain – are internationally renowned, Gaudi’s furniture remains a somewhat mysterious facet of his wildly influential career. 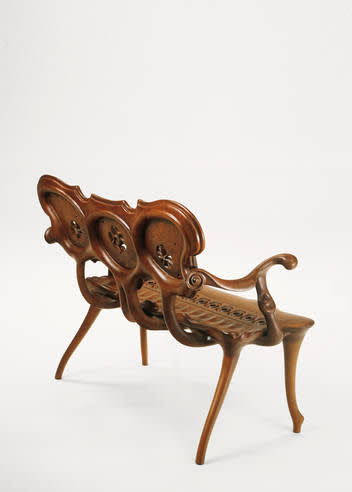 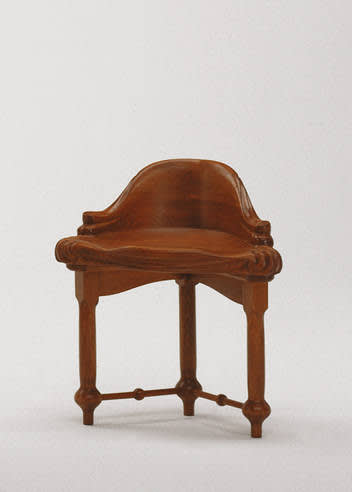 Born in Catalonia in 1852, Gaudi moved to Barcelona for university in 1878 and spent almost the entirety of his professional career in the coastal town, taking creative advantage of the area’s strong economy and rise of a powerful middle class. Gaudi erected structures around the city, each designed in his trademark style of artistic fantasy, merging the fluid lines of Art Nouveau with neo-gothic grandeur. From the Sagrada Familia and Park Güell, to Casa Millà, Casa Battló and Casa Vicens, Gaudi’s monuments are architectural treasures scattered around the city of Barcelona, still satiating the eyes and minds of millions. 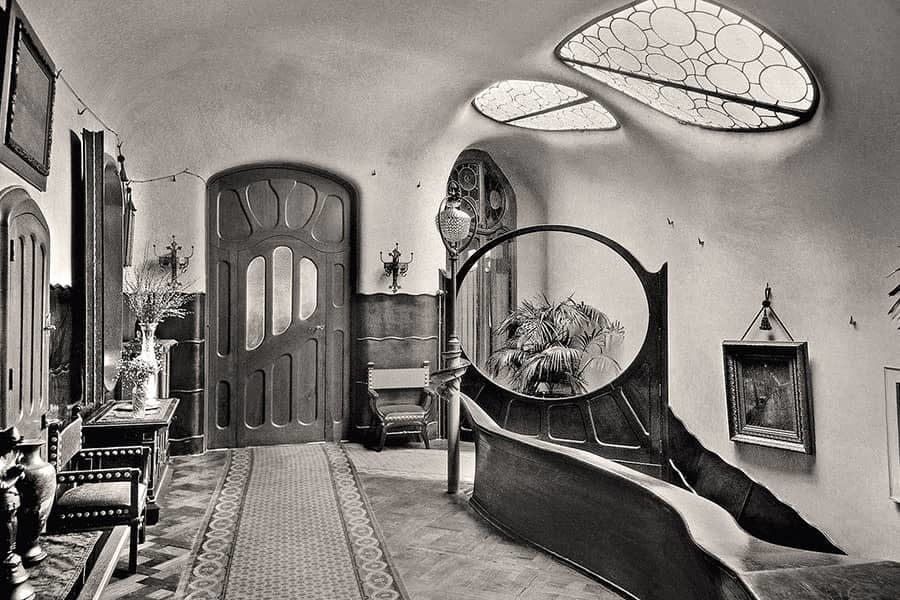 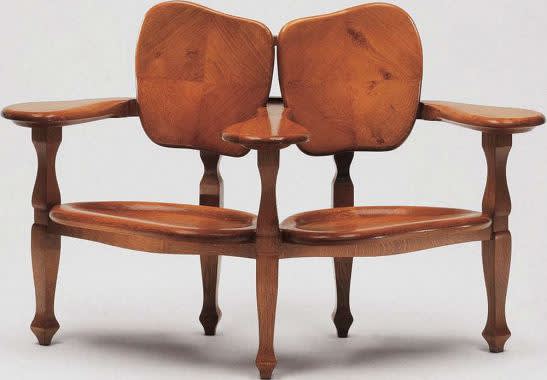 While his large scale structures are the works for which he is known best, Gaudi’s career designing furniture began in 1878, the year he graduated from school, with the creation of his own roll-top drafting table complete with grandiose side drawers and finished with animal and vegetable motifs. 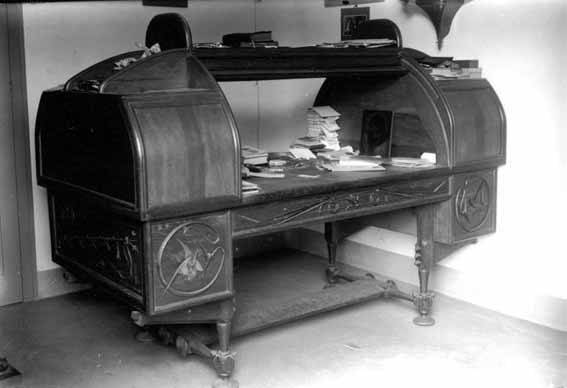 That same year, before receiving his first large-scale commission, Gaudi designed a display case for the Eduard Comella Glove Factory at the World’s Fair in Paris. This unique glass case finished with inlaid wood enabled viewers to walk entirely around, offering a complete look at the contents inside. The design won the architect a silver medal and garnered the attention of Gaudi’s first patron, a Spanish entrepreneur named Eusebi Guell. Guell commissioned Gaudi to design furniture for the Pantheon of the Sobrellano Palace, for which he completed a group of walnut, metal and velvet church pews in 1880, serving as one of the earliest examples of his trademark neo-gothic aesthetic. 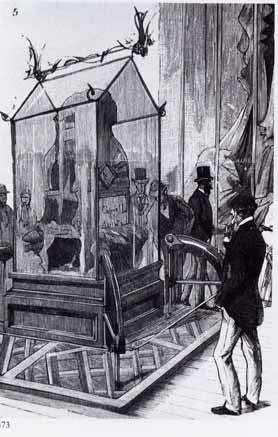 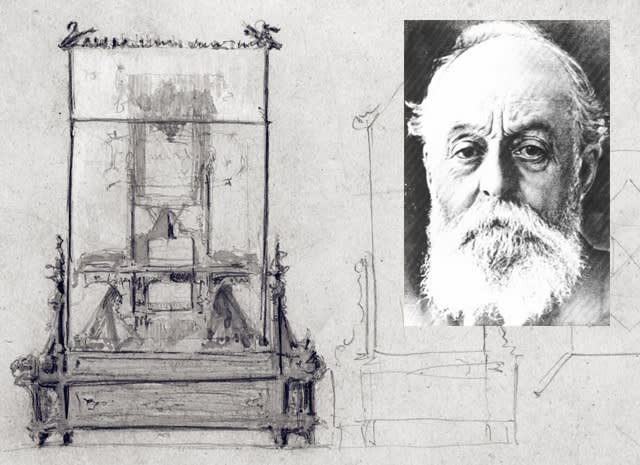 As Gaudi’s career advanced and his relationship with Guell flourished, the architect began creating entire suites of furniture for a majority of his buildings, each design employing likeminded materials and means of ornamentation to embody the focus and spirit of the overall structure. 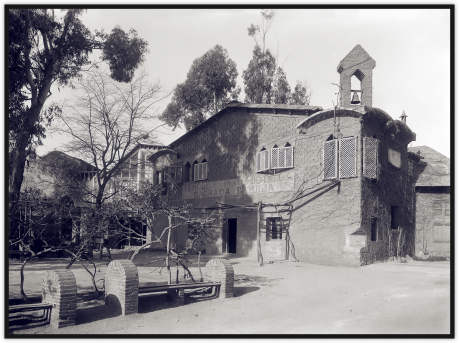 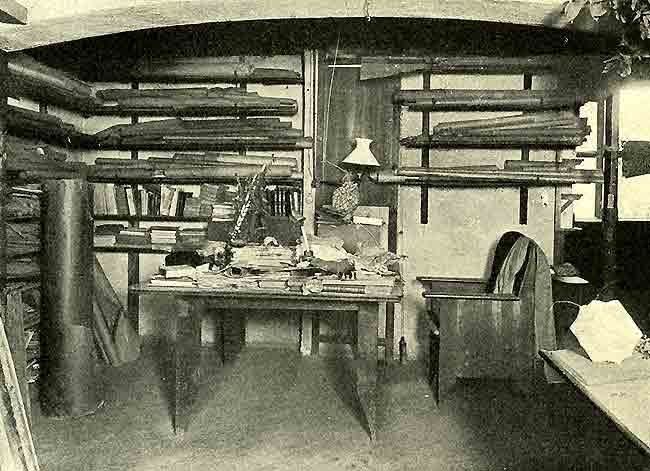 Atelier of Antoni Gaudi in the Sagrada Familia Home

For Palau Gulle, a commanding edifice built of rich materials such as wood, iron and stone, Gaudi designed likeminded furnishings finished with velvet, leather and glass. In the case of Gaudi’s most ambitious structure of his career, the Sagrada Familia, a project that began in 1889 and is still under construction, the architect created furnishings ranging from masterful wood and iron church pews and portable wooden pulpits, to wrought iron candelabras, candle boxes of wood, copper and marble, lecterns made of wire, and various votive lamps of copper, brass, alabaster and cut glass. The variety of materials employed for the furnishings within the Sagrada Familia were merely reactive measures to the abundance of structural and ornamental details on the building’s façade. 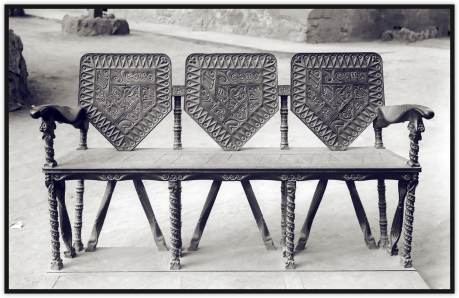 Furnishings for the Sagrada Familia

While Gaudi continued to design a number of religious furnishings for use in cathedrals, none as ornate as those for the Sagrada Familia, he also had a hand in outfitting residential settings. In 1900, Gaudi completed an entire group of furnishing for Casa Calvet, ranging from seating implements such as velvet armchairs and stools, three-seat sofas, and double benches, to office desks, pine book cases, oak dining tables and brass clothing racks. 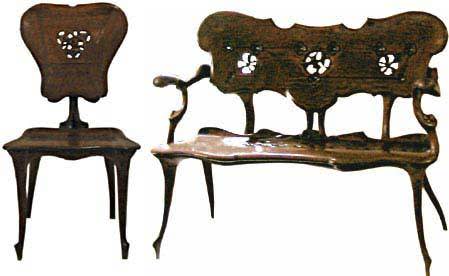 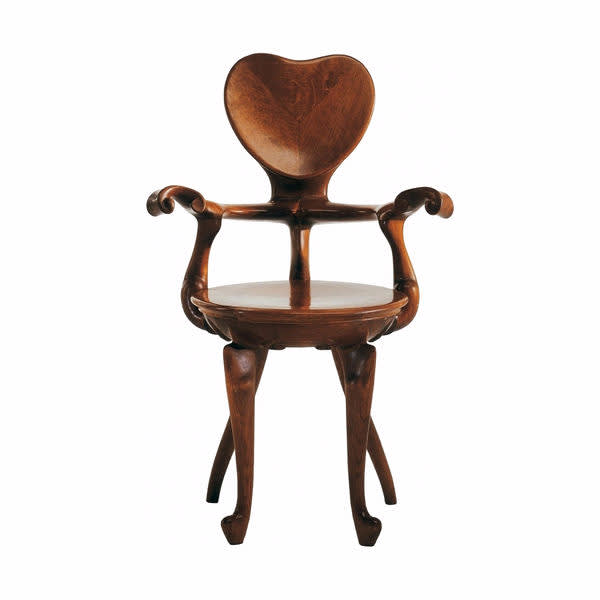 Following his completion of Casa Calvet, Gaudi became so acclaimed in the area of furniture design that he was commissioned only as a decorator for Bar Torino’s Arab Room, in which he utilized a large amount of carved wood married with ironwork and delicate glass to convey a Catalonian art nouveau aesthetic known as ‘modernisme’.

In 1906, Gaudi began work on the last private residence of his career, Casa Milà, a modernist building in downtown Barcelona, for which he designed a suite of accessories such as custom brass door jams, boxes, armoire files and oak doors. 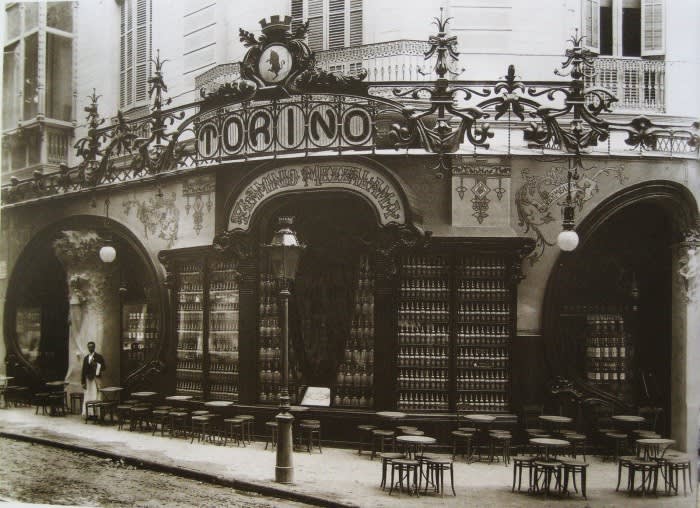 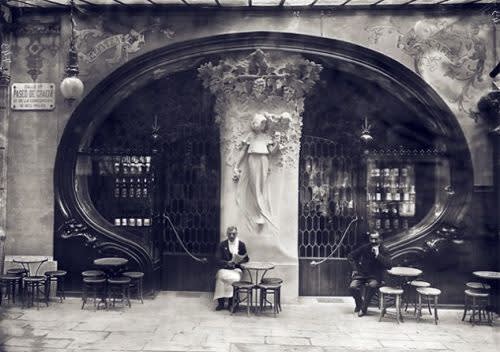 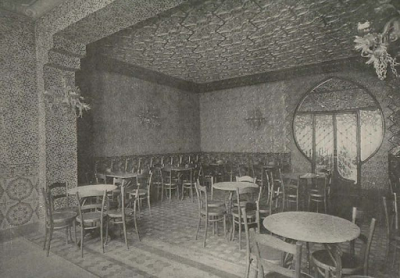 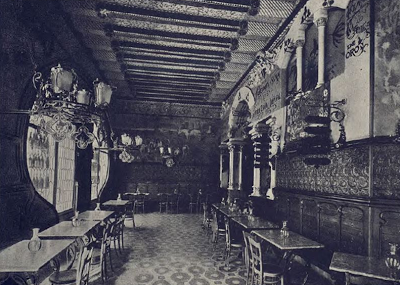 While Gaudi’s work designing furniture has proven as integral to the overall understanding and appreciation of his all-encompassing creative vision, a significant number of his impressive designs were lost in the 1930s during the Spanish Civil War. Those that remain are treasures housed primarily in museums across Spain, with little to no international visibility; a remarkable misfortune considering the stylistic significance and artistry captured in each unique piece. 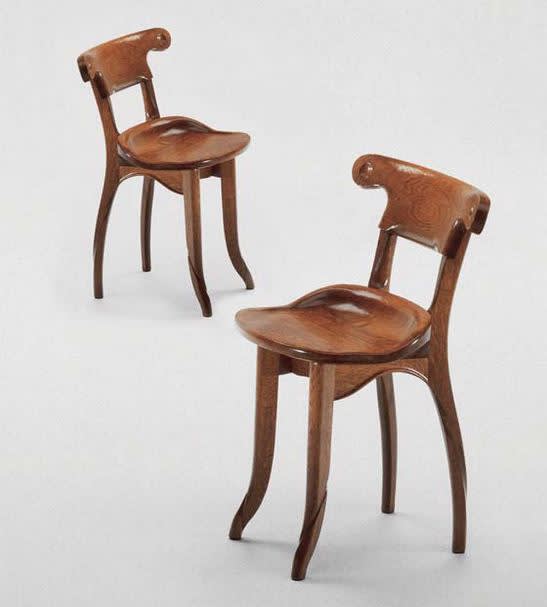 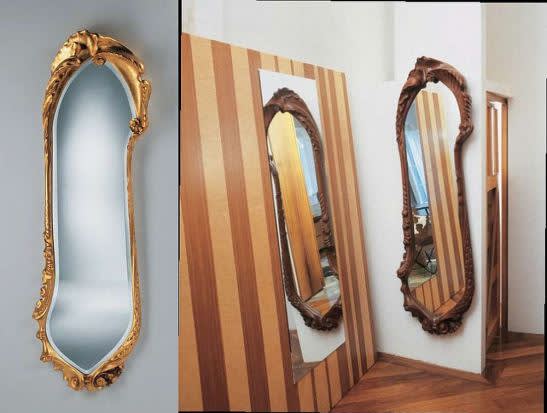 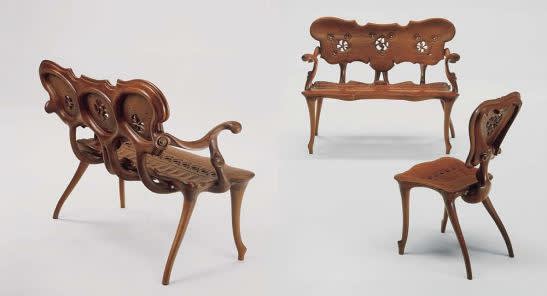 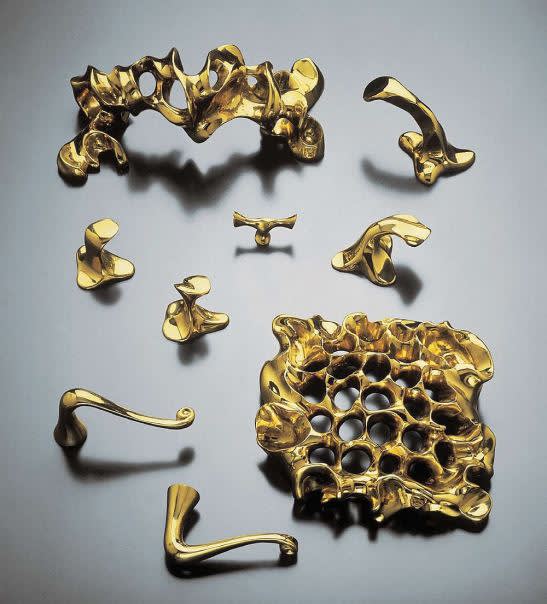