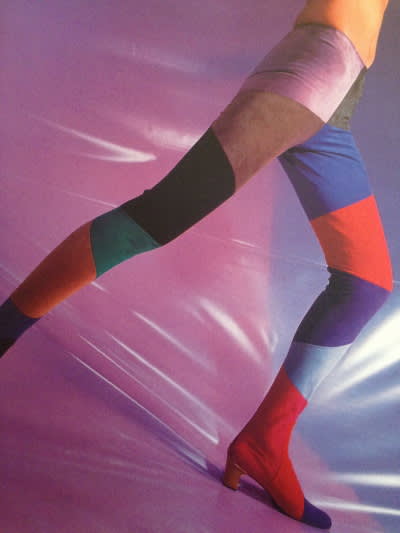 While the everyday fashion consumer may not recognize the names Herbert and Beth Levine, their designs have certainly inspired much of the footwear coveted by contemporary fashionistas today. After meeting during a chance encounter in 1944 when Herbert was working as a fashion executive and Beth, a designer, applied for a job at a footwear manufacturer, the duo fell in love, married three months later, and launched their eponymous brand in 1948.

Under the Herbert Levine label, Herbert focused principally on running the business while Beth became the best-known American women’s shoe designer from the 1950s through the 1970s, ultimately adapting the title “America’s First Lady of Shoe Design”. 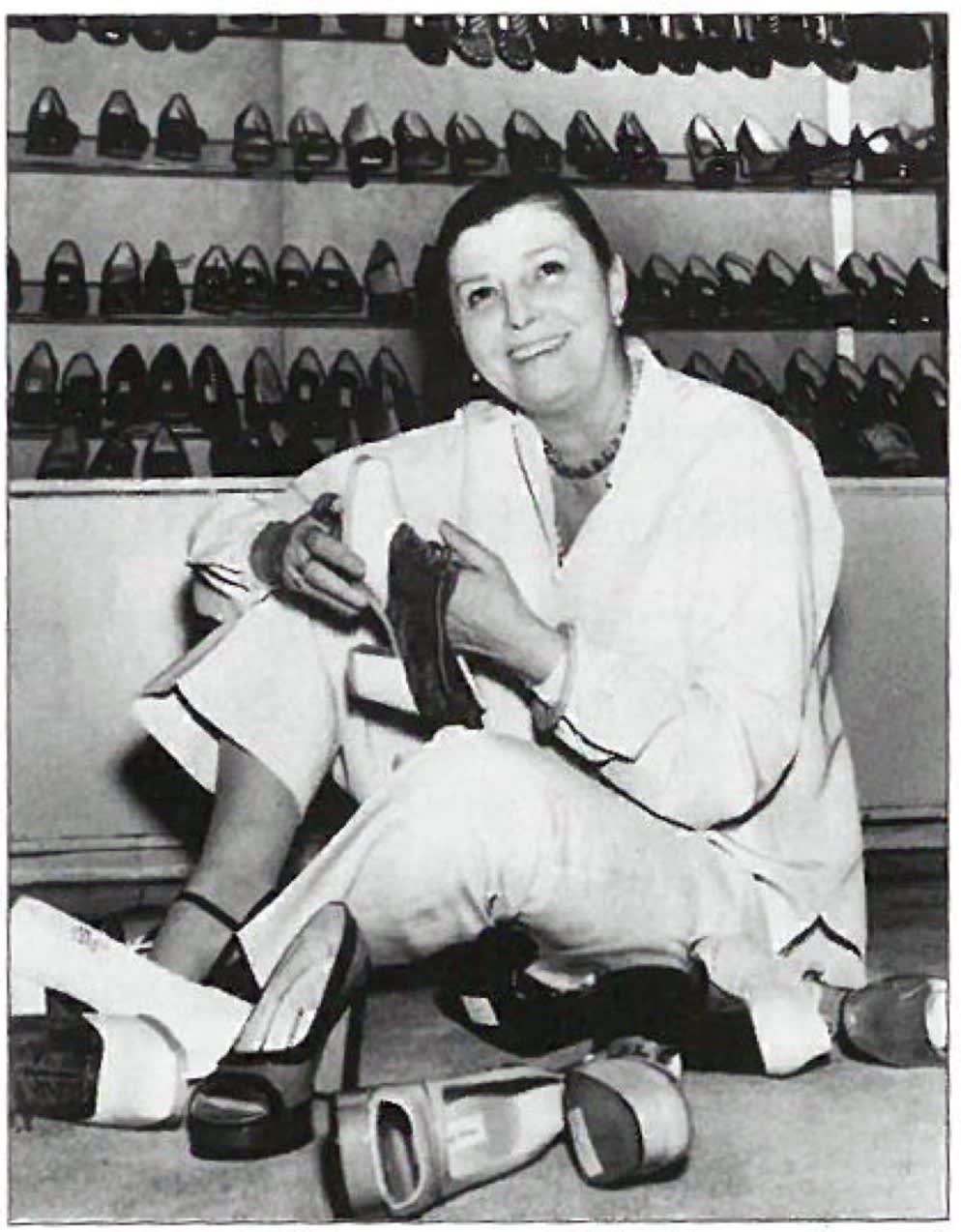 Among the couple’s many accomplishments, Beth Levine’s greatest influence on the world of footwear is considered to be reintroducing boots to women’s fashion in the 1960s. In rebranding boots as an integral part to a woman’s outfit, as opposed to being worn merely for protection from bad weather, Herbert Levine produced an entire collection built around fashion boots, offering designs in a variety of heights, colors, and materials – they even introduced ‘Stocking Boots’ which were panty hose with heels attached. The silhouette sparked international adoration and even inspired Nancy Sinatra’s 1965 hit song “These Boots are made for Walkin’”. Not only did Sinatra wear Levine’s designs in publicity shots for the footwear anthem, but the song sparked such demand for fashion boots that Saks Fifth Avenue opened a special section in its shoe department called “Beth’s Bootery”. 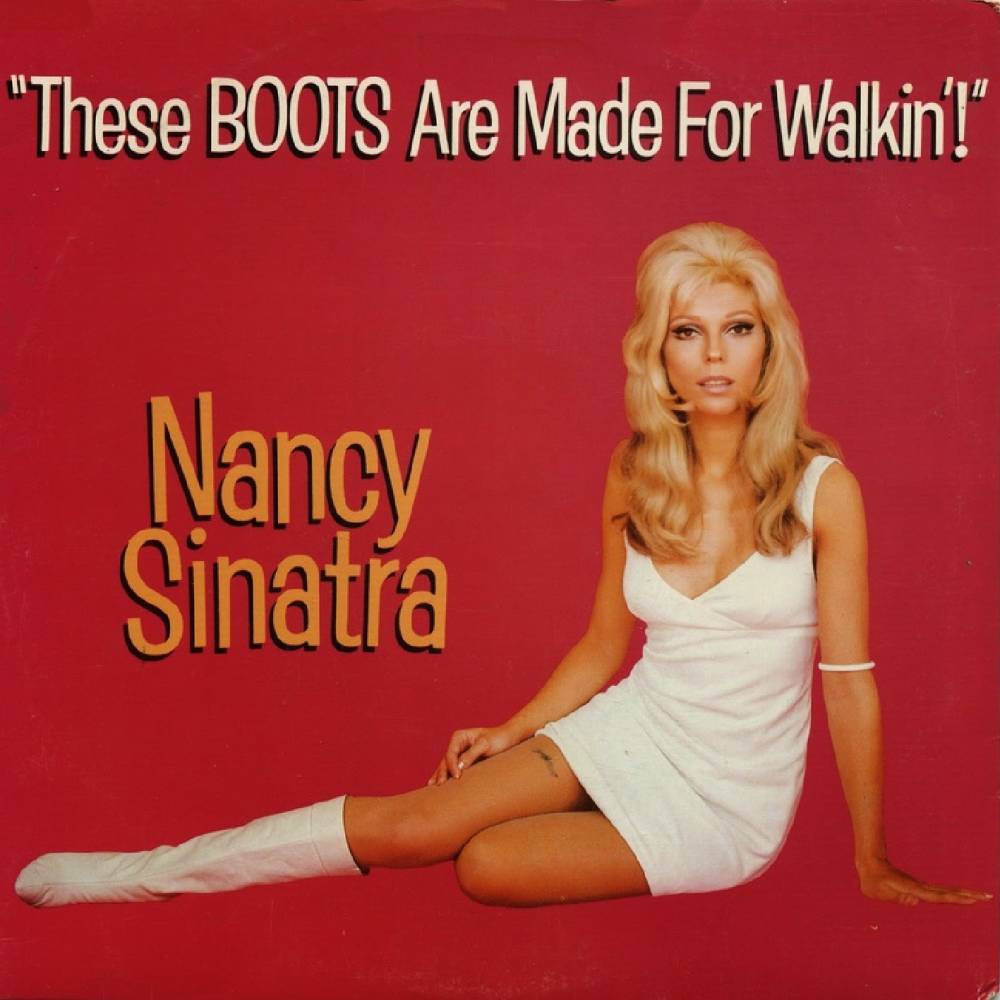 These Boots are Made for Walking, 1966 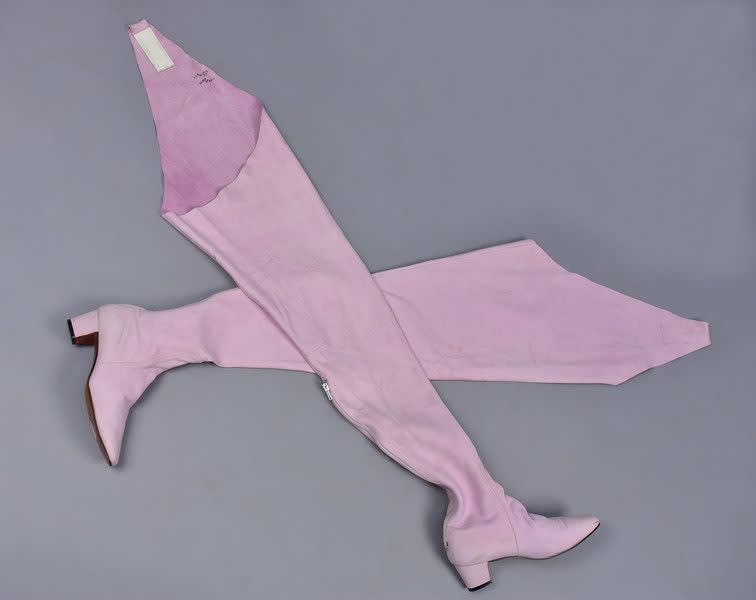 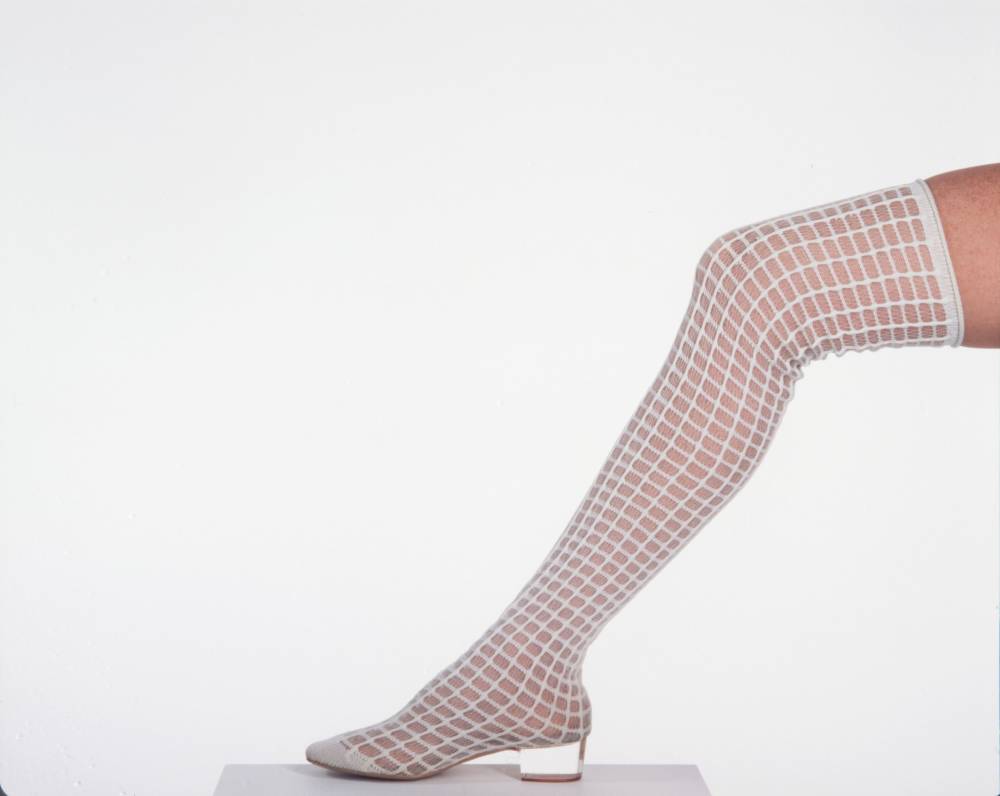 Beth Levine changed the silhouettes of American fashion, as they relate to shoes, in recognizing how women admired the delicacy and femininity of footwear when modeled on her tiny – European size 35 – foot. She set out to create designs that made the women’s shoe size look more petite through experimenting with cutting away leather to expose skin. In doing so, Levine’s designs were regarded as more elegant than her predecessors while also leading to some revolutionary footwear breakthroughs, such as popularizing the shoe style known as mules. 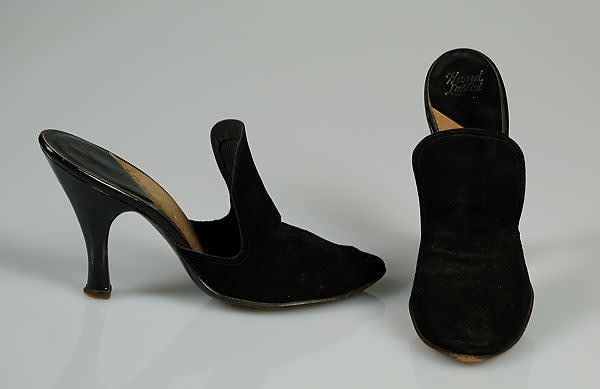 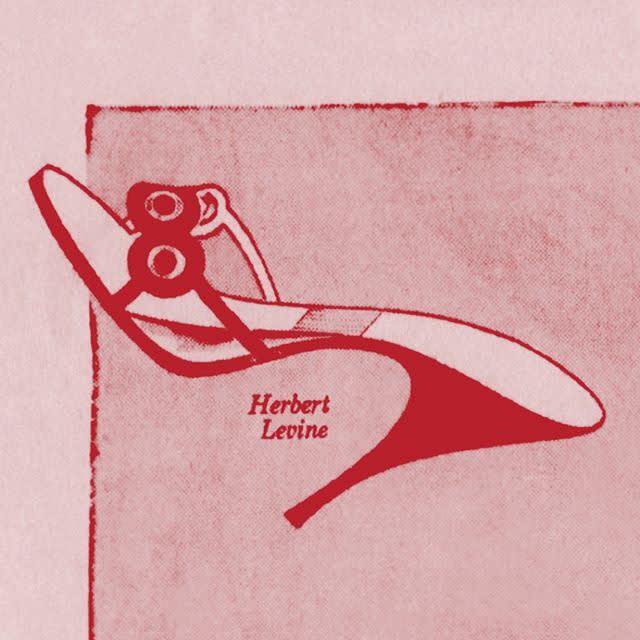 "Ballin' The Jack," also dubbed ‘Spring-o-Lator’ mules, incorporated an interior elastic strip that allowed the wearer to keep the shoes securely on while wearing stockings, even despite the lack of straps at the side or back of the shoes. Throughout the 1950s and 1960s a wide range of labels incorporated Levine’s ‘Spring-o-Lators’ technology in their designs. 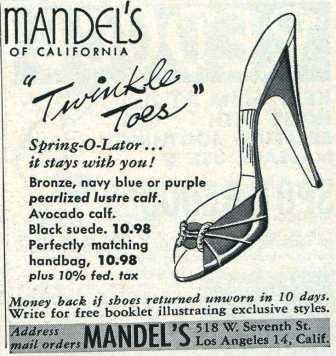 In addition to the brand’s notable footwear innovations, Herbert Levine was beloved for its whimsical approach to design. Introduced in 1957, the ‘No-Shoe’ shoe was a unique concept that reduced footwear to its most essential element - the sole. The topless shoe was designed on a dare from Stanley Marcus and was secured to the foot with adhesive pads, a theoretical exercise that spoke to the Levine’s daring side. While their 1959 “Kabuki” shoes featured a closed-toe set atop a curved wooden platform, and that same year, at the request of Diana Vreeland, fashion editor of Harper’s Bazaar at the time, Beth designed a style known as “Aladdin’s Lamp” to emulate the shape of the magic oil lamp of Aladdin.

The 1960s birthed some of the brand’s most playful shoes of the couple’s career, including the ‘Race Car Shoe’ and ‘Barefoot in the Grass’ sasndals. First designed for the wife of a driver in the 1967 Indianapolis 500, the Race Car Shoe included a color-blocked façade, mock tires, a windshield and headlights; the shoe was such as success the brand released many variations of the original design over the years. While the latter style, ‘Barefoot in the Grass,’ was created in 1966 using an AstroTurf insole, a vinyl vamp and a green kid heel – a witty use of contemporary and unexpected materials. 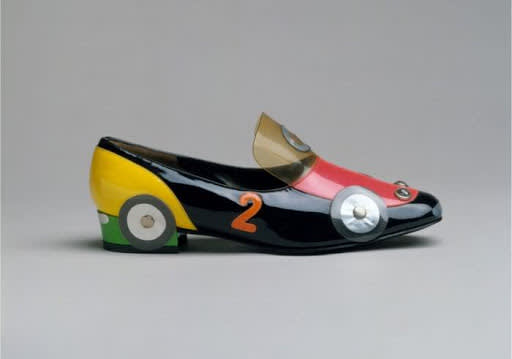 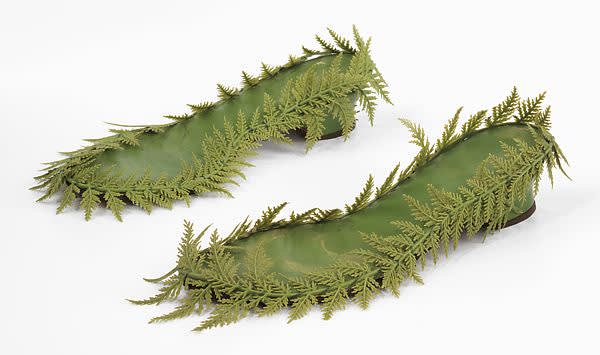 Perhaps the only high fashion label to ever incorporate AstroTurf in their designs, Herbert Levine expanded on this quirky narrative and explored other synthetic materials popularized throughout the 1960s, such as vinyl, acrylic, laminate, and plastic. Their 1961 “Cindarella” shoe was fabricated entirely from clear plastic – later inspiring designers such as Charles Jourdan – while the brand’s “Paper Twist” design featured brightly colored, double-faced, laminated paper strips twisted into exquisite swirls.

While the duo birthed some of the most groundbreaking, referenced shoes in the history of footwear, their legacy today lives on mainly in international costume collections. While despite the brand’s extinction, modern variations of Herbert Levine’s most iconic designs walk the runway each season, ultimately ending up in fashion lovers closets around the globe. 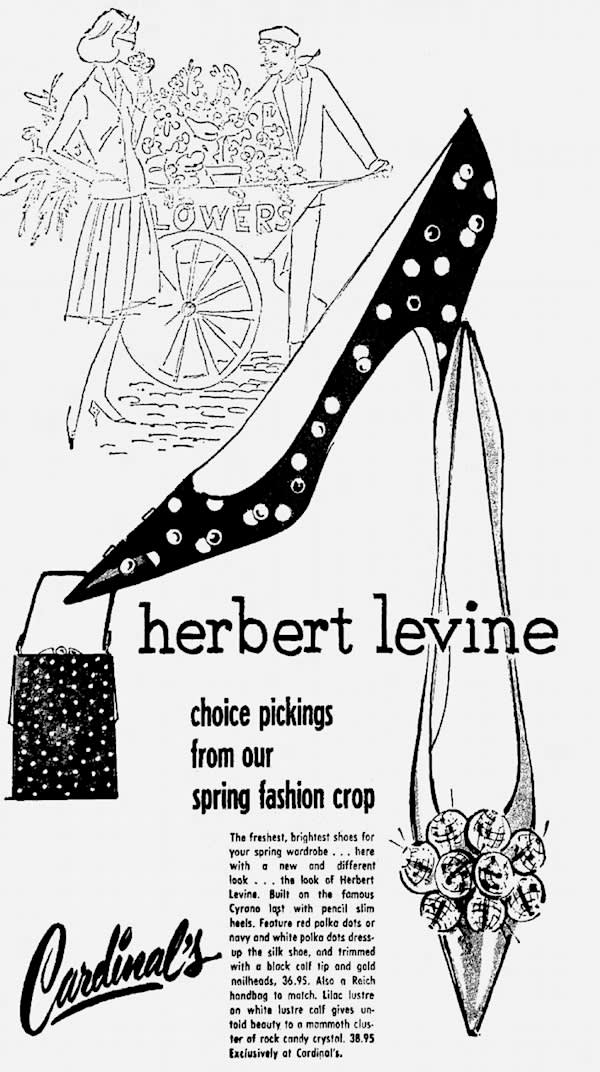