Throughout the 1960s and 70s, the Bay Area was a hotbed for counterculture and hippie movements occurring along the West Coast. Kaisik Wong, a progressive clothing artist born in San Francisco, emerged on the creative scene in the early 1970s and was active until his death in 1990. His work, most of which was entirely handmade without any use of patterns, was a direct reflection of a time when folk art and DIY craft were at the forefront of grassroots artistic practices.

Wong employed fashion as a medium of escapism during an otherwise tumultuous era; living in his own fantastical realm and believing that the body should be a bejeweled, radiating temple of beauty. Throughout his impressive yet brief career, Wong created garments for cultural icons including actress Angelica Houston as well as singer Elton John, bridging a prevalent gap between the hippie movement and an era of glam-rock.

As a close friend and frequent collaborator of Salvador Dali’s, Wong created countless costumes for the Spanish surrealist and his wife, Gala; enjoying each other’s unique and bizarre elegance. Wong once wore a costume he had made for himself while visiting Dali, one that he referred to as his “Monkey King” persona, which served as early inspiration for an incomplete film collaboration between the progressive designer and filmmaker Steven Arnold, an avant-garde artist who was one of Salvador Dali’s most notable protégés.

Wong has often been noted as ‘infamous’ due to his garment’s unusual shapes and odd use of materials, and grouped with designers described as ‘counter-couture’ by the mainstream fashion world. His work gained further visibility over a decade following his death when Nicolas Ghesquière showed a group of garments in his spring/summer 2002 collection for Balenciaga that were nearly identical to one of Wong’s most distinguished designs. Ghesquière’s ‘replicas’ very closely mimicked Kaisik Wong’s handmade, patchwork vest from 1972, through the garments’ fabrication techniques and unique forms of embellishment.

It was later said that a design assistant of Ghesquière’s initially came across Wong’s work in a book called Native Funk & Flash from 1974, comprised of images exhibiting various hand-crafted artisan fashions from the era. While further examples exist of Ghesquière referencing the work of Kaisik Wong – such as in a jacket for Balenciaga’s 2010 Resort collection – the case from 2002 still stands as a preeminent example when discussing appropriation and copyright infringement in the arts, most specifically relating to fashion.

Through his work, Wong brought the techniques and craftsmanship of couture to his own countercultural DIY designs. He helped to pave the way for a more emotional and rebellious glamour in American fashion, injecting the themes of love, funk, surrealism, psychedelic dreams, and mysticism into his dazzlingly obscure designs. 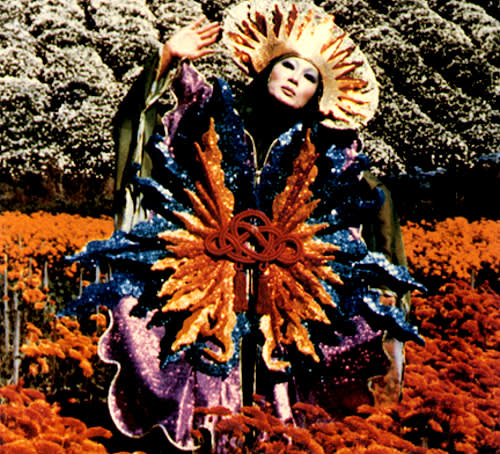