A brief history of holes in high fashion

While much credit is given to Japanese deconstructivists of the early 1980s for introducing holes and slashing into high fashion, the trend actually predates the Kawakubo’s and Yamamoto’s of the world by several centuries. Numerous examples of slashes on ornate clothing exist dating back to the fifteenth and sixteenth centuries, throughout the German Renaissance and within the English royal House of Tudor.

This self-crafted aesthetic was initially inspired by battle and originated in the late 1400s. By the early sixteenth century deliberately slashed sleeves became a trend amongst Western European aristocratic men as a means of revealing layer upon layer of ornate fabric previously hidden below billowing outerwear. Soon after, women adopted this deconstructed trend, allowing for entire families to display multiple signs of wealth simultaneously.

Fast forward to the late 1970s when contemporary manifestations of this self-crafted apparel movement began to appear in clothing on the streets as a means of rebellion, and then quickly infiltrated high fashion in the collections of early, avant-garde Japanese fashion designers. Rei Kawakubo introduced her first perforated sweater for fall/winter 1982 – said to be her manifestation of ‘lace’ – while for spring/summer 1983, Yohji Yamamoto showed a collection of oversized, monochromatic pieces spattered with flower-shaped holes and elaborately finished edges, an archetypal example of the Japanese designer’s obsession with unconscious beauty.

For spring/summer 1991, British fashion's queen of rebellion, Vivienne Westwood, showed a collection titled ‘Cut and Slash’. Each look was directly inspired by the tradition of slashing silk fabrics in Tudor portraits of the fifteenth and sixteenth centuries. Westwood manipulated satin, cotton and denim in her outlandish and daring shredded collection.

One of the foremost examples of extreme slashing in high fashion was a look shown on Carmen Kass in John Galliano’s fall/winter 1998 haute couture show for Christian Dior, titled the ‘Diorient Express’. Kass’s obré slashed sleeves and cut bloomers were not embodiments of a rebellious spirit, but were rather ornate examples of the opulent ideals the trend was founded upon centuries before. 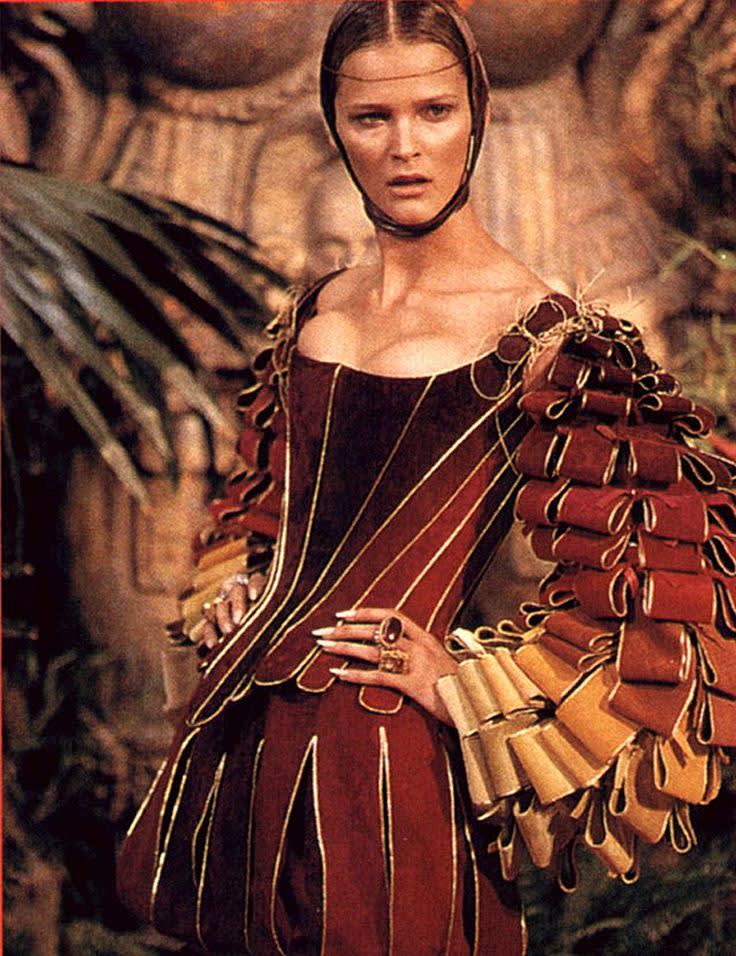