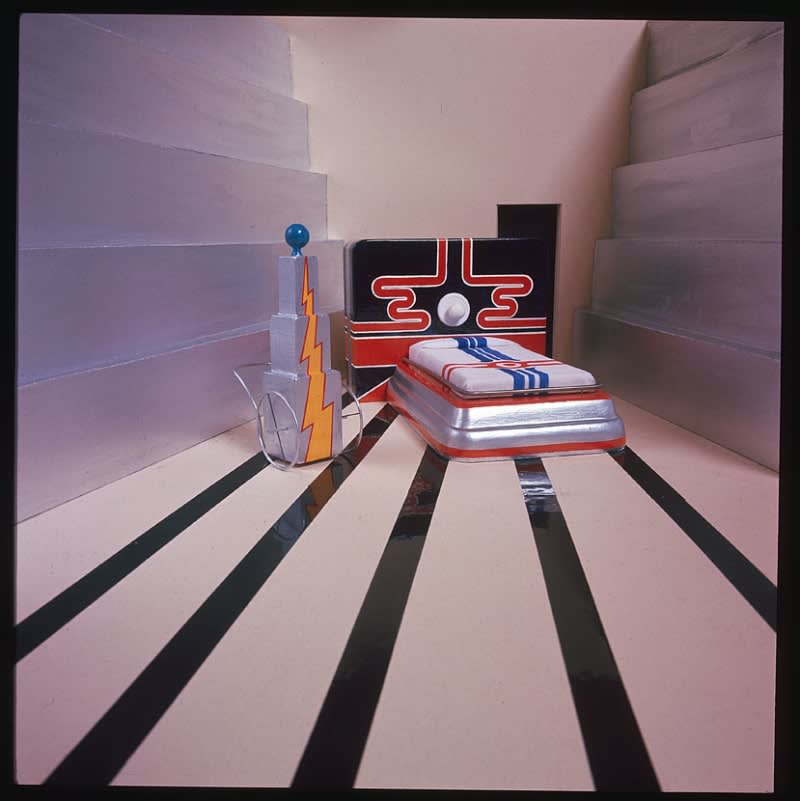 Bed in stamped metal with wardrobe behind and Atlantic light, 1967

Archizoom Associati was a Florentine design group founded in 1966. Like countless progressive design collectives that came before, their creative statement was rooted in ‘anti-design’, preaching avant-garde doctrines that came to define an entire era of radical Italian movements. Stylistically, their work rejected modernist ideologies of the early 20th century, instead borrowing from the fictional, graphic world of Pop Art. Archizoom Associati toyed with post-modern ideas and sought to design environments in which the ‘user’ took part in their creation and function, believing in a basis of self-expression and communication.

In 1967 Italian architect Ettore Sottsass asked each of Archizoom’s four founding members to design a bed in a unique environment on a 1:10 scale. The assignment was to introduce the collective in Domus Magazine – an architecture and design publication founded by Gio Ponti in 1928 – and was to be presented at an exhibition taking place that year in Lyon, France.

The four resulting beds came to make up the group’s Manifesto of Radical Architecture. Collectively, the typological designs shared an objective to represent imagination, rather than succumbing to traditional principles of modern day manufacturing. Each work stood as an anti-archetype – rejecting elementary details – and was to exude a sizable amount of Pop imagery. Pop, at the time, was a radical format, in which its objective was to unite culture through the reevaluation of taste, achieved by way of kitschy elements that questioned elegant, geometric design. Each of Archizoom’s dream beds personified likeminded design ideologies while representing four distinct avant-garde identities in their Pop-induced designs.

Bed in stamped metal with “Grande A” light, rear wardrobe and front armchair for taking off socks, 1967