In honor of Fall/Winter 2019 couture week, Minnie Muse sat down with Didine Alaïa, the loveable St. Bernard belonging to late Tunisian couturier Azzedine Alaïa. While life at the designer’s home and atelier has taken some adjusting to following Azzedine’s tragic passing in 2017, Didine recollects fondly on the memory of his father, or as he called him, ‘Baba’. Minnie Muse sat down with Didine in – where else – Azzedine’s famed dinning-room-kitchen at the brand’s Rue de Moussy headquarters in Paris’s Marais district, to discuss all things Alaïa. See highlights from our one-on-one interview with Didine, below…

Instagram Handle: I don’t use social media, my paws are too big for an iPhone, but I often make special appearances on @AssociationAzzedineAlaia

Azzedine and his Cats

Minnie Muse: Are you the only child?

Didine Alaïa: I have too many siblings to count! Papa had multiple cats, 2 Maltese Terriers named Waka Waka and Anouar, 1 owl named Callas, and who knows how many others…

DA: Baba loved mid-century and modern furniture, one of his favorite designers being Pierre Paulin. Much of the furniture in the suites attached to the Alaïa headquarters on Rue de Moussy in the Marais district are original pieces by Paulin. So, in order to keep me off of the archival pieces, baba had Pierre Paulin’s studio design me an extra-large, custom deep blue geometric bed.

MM: And tell me about your dog house…

DA: For my first birthday, baba gifted me one of Jean Prouvé’s serially manufactured petrol stations from 1953. Crafted out of individual pieces of aluminum and perforated metal sheeting, the modular design can expand or contract as you please. Baba miniaturized it for me – by everyday standards - but made it perfect for the likings of a dog my size. 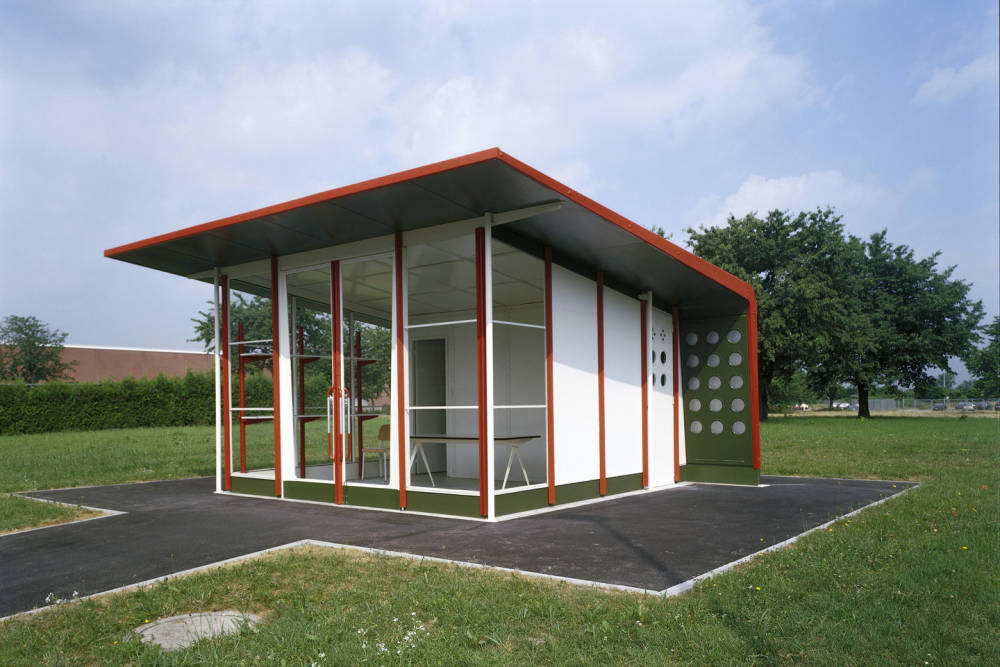 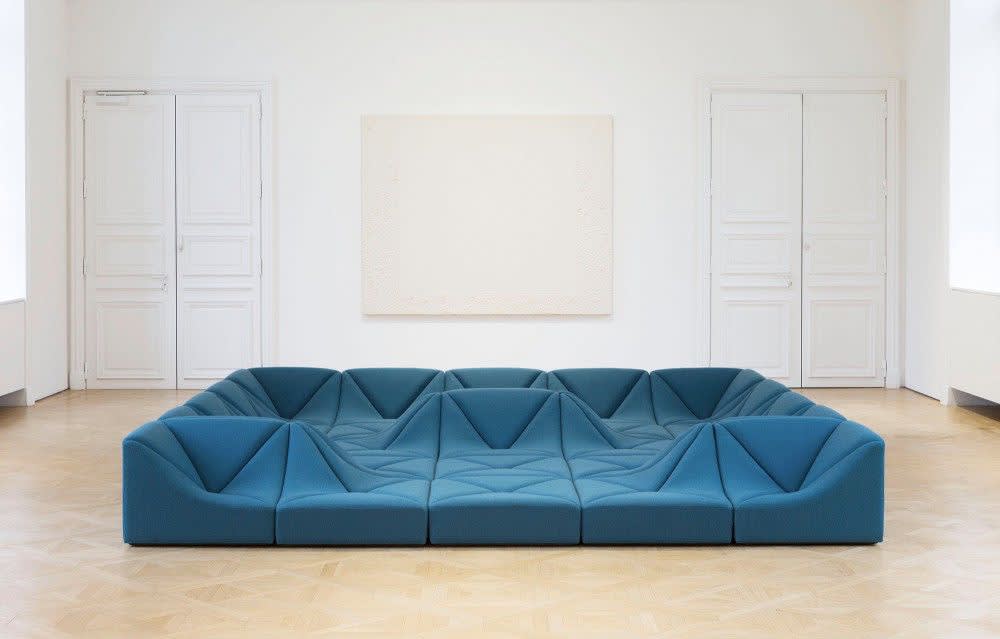 MM: Where is your favorite place to sleep?

DA: I eat, sleep, and breathe baba’s cooking. I have a mattress in the corner of the kitchen at the Maison Alaïa headquarters, where I used to spend hours each day as he prepared large lunches and dinners for friends! After guests leave, I usually take naps on the cool, stone ground in the private courtyard outside the kitchen.

MM: Out of what type of bowl do you eat?

DA: Baba’s dear friend industrial designer Marc Newson made me two, large aluminum and colorful lacquer bowls to match some of his furniture from the 90s in baba’s collection. Red lacquer is for food and green is for water.

Resting in the Courtyard of the Association Azzedine Alaïa

MM: What is your favorite restaurant in Paris?

DA: Chez Azzedine! Nothing is better than baba’s home cooking. He was the most gracious host and his kitchen is always the biggest hotspot in Paris, visited by celebrities and unknowns, alike. Baba always assembled the most interesting mix of people, from Oscar-winners and models, to artists and longtime friends. Diets are left at the door when you come for lunch or dinner; he was famous for dishes like his special couscous and mashed potatoes. 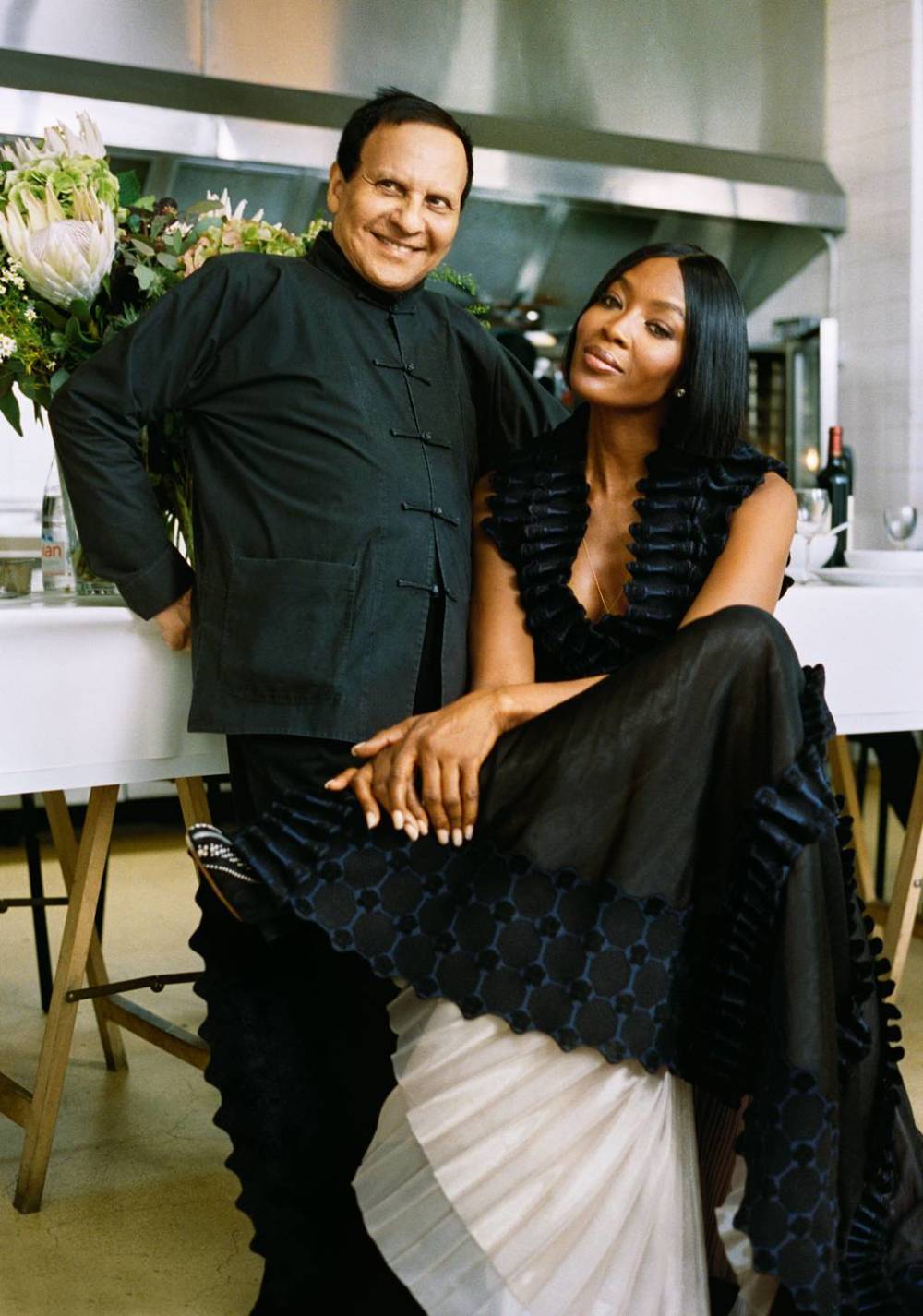 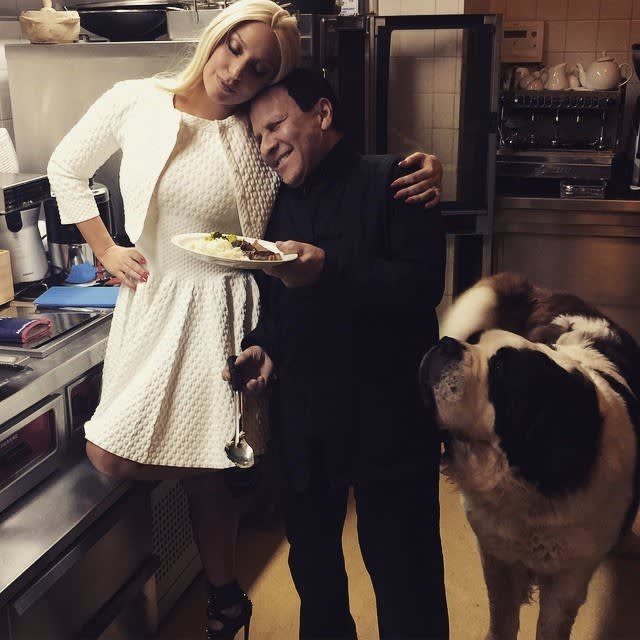 Azzedine and Didine with Lady Gaga 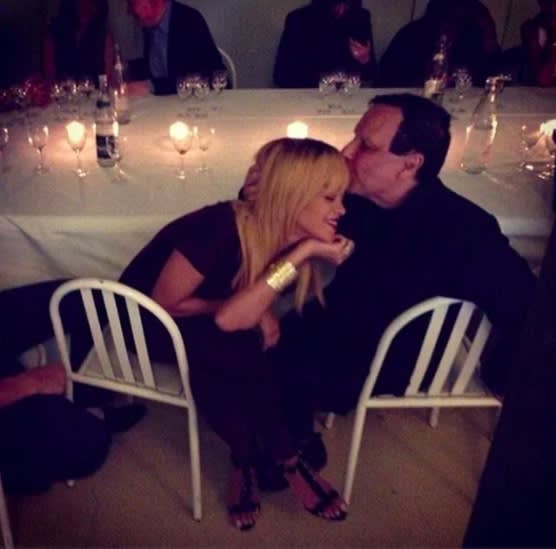 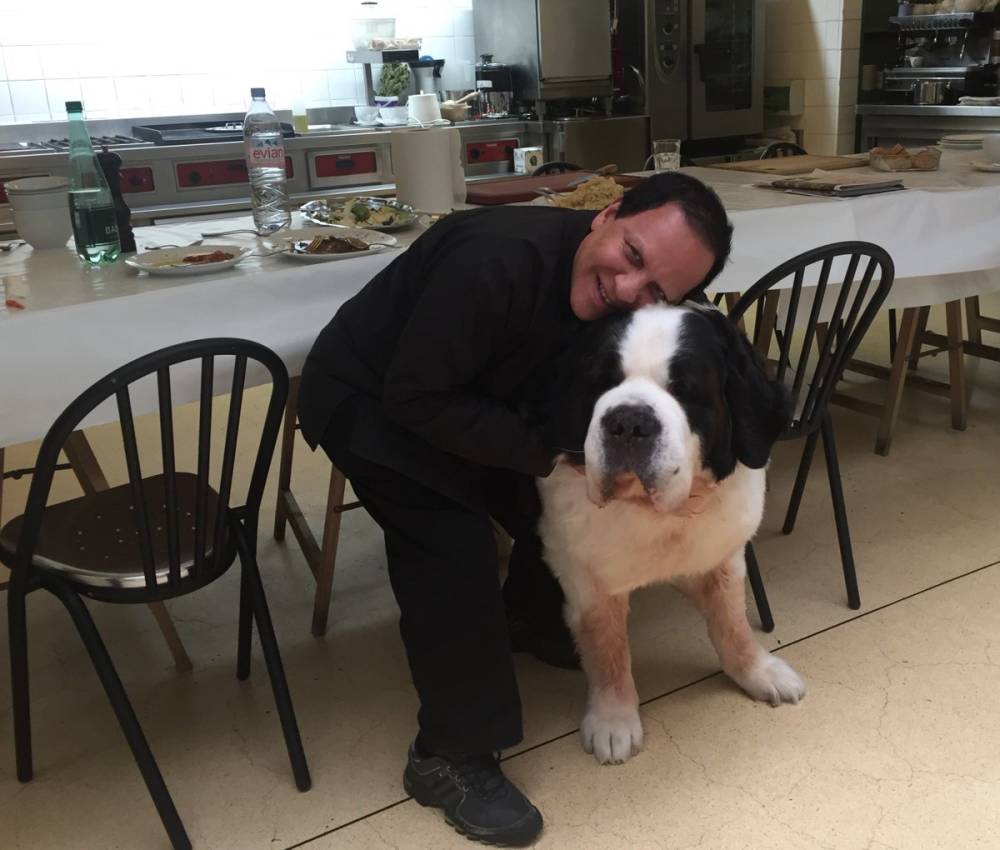 MM: Do you wear cologne or perfume?

DA: My thick coat can sometimes get a bit smelly after so many hours in the kitchen, so I like to keep fresh with Alaïa’s ‘Paris Extrait de Parfum’. The scent has animal and musky notes that suit me, enriched with warm hints of vanilla – I have been told I was the inspiration behind the fragrance.

MM: Do you have a favorite color?

MM: Your baba was a collector of many things, furniture, vintage couture, books, etc. Do you have a favorite title in his library?

DA: A few years ago I was perusing baba’s bookshelves in the atelier when I stumbled across the most beautiful, out-of-print Alaïa book published by Steidl in 1987. With outstanding photos of baba’s early collections shot by Bruce Weber and Helmut Newton, I saw the rarity of this book as a parallel for baba’s life – discrete on the surface, but filled with endless beauty inside. Not to mention, the book is also quite large, so it’s the perfect size for gigantic paws!

MM: Do you go on walks around the Marais? If so, do you have favorite companion with whom to stroll around the neighborhood?

DA: Definitely Colombia songstress, Shakira. She is the closest thing I have to a mother; in fact, I was a gift from her to baba many years ago.

MM: Do you have a dog carrier of any sorts?

MM: Haha, true! But do you wear a collar?

DA: Coincidentally, my neck is the exact size of baba’s XS – 60 cm – corset belts, with an extra hole added for comfort. Baba used to take me in the shop each Sunday while it is closed and allow me to choose my new collar for the week; I love the laser-cut styles for summer!

MM: Do you have a favorite film?

DA: My favorite movie is the 1985 James Bond film, A View to a Kill, strictly, of course, for the fashion. Baba’s close friend and collaborator Grace Jones starred as villainess May Day and wore some very iconic, archival Alaïa looks. In one scene she even free dives off the Eiffel Tower in an Alaïa catsuit!

MM: And how about a least favorite?

MM: Do you have a motto or favorite quote?

"Oh, no. You don't understand this is an Alaïa.” "An a-what-a?" "It's like a totally important designer." - Cher Horowitz played by Alicia Silverstone, Clueless

A View to a Kill

Grace Jones as 'May Day'

MM: What is something people might not know about your late baba, Azzedine?

DA: Before he was a designer, he was a sculptor and studied at the Ecole des Beaux Arts in Paris. The first major piece of art he bought was a Roman torso. That is why his designs are so sculptural, and so much of his distinct style emphasizes the body in how a dress shapes and clings to the female form. Coincidentally, he was not the best sculptor and eventually dropped out, but he became an expert at studying and understanding the body. My favorite exhibit of his designs was at La Galleria Borghese in Rome, which showcased the intermixing of these two passions. 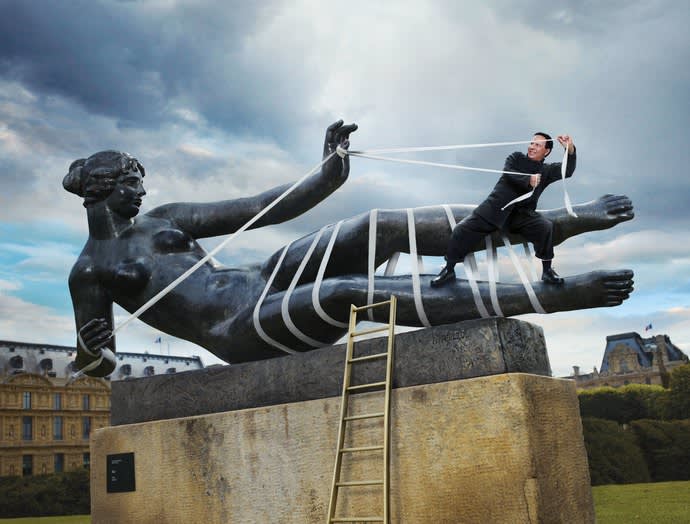 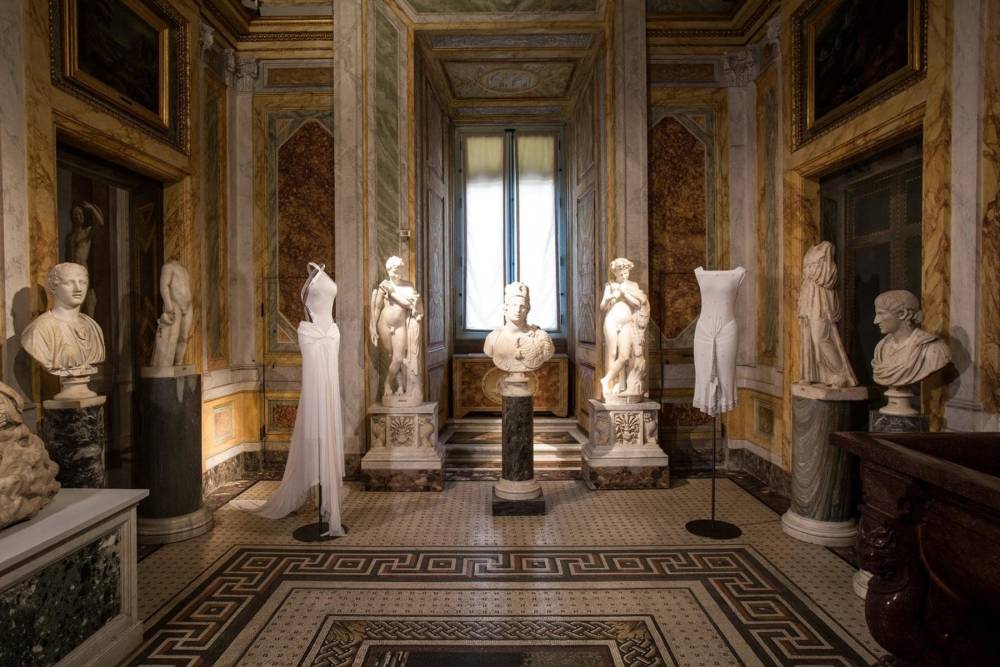 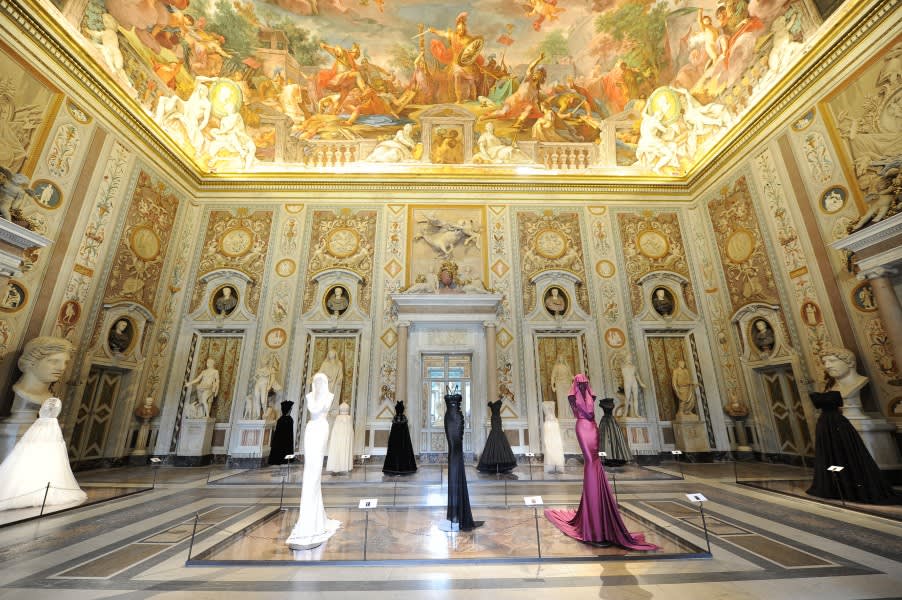 MM: Speaking of art, do you have a favorite work in Azzedine’s collection?

DA: It’s hard to pick a favorite from baba’s extensive collection, which features work by Jean-Michel Basquiat, César, Tatiana Trouvé, and of course, paintings by baba’s longtime partner, artist Christoph van Weyhe. But my favorite works have to be baba’s plate portraits painted by his dear friend Julian Schnabel; they capture his aura to eerie accuracy. Baba and Julian go way back, in fact, when the first Alaïa shop opened in New York in 1988, it featured multiple works by Schnabel. Now, one of baba’s portraits is hanging in the Association Azzedine Alaïa bookstore, accessible through the Rue de Moussy building’s courtyard.

In the Association Azzedine Alaïa Bookshop

MM: What is your fondest memory of your baba?

DA: When he was stressed or had a late night in the atelier preparing a collection, to distract him, we often watched the National Geographic channel. His deep appreciation for animals and love of nature should come as no surprise; our house is a zoo! 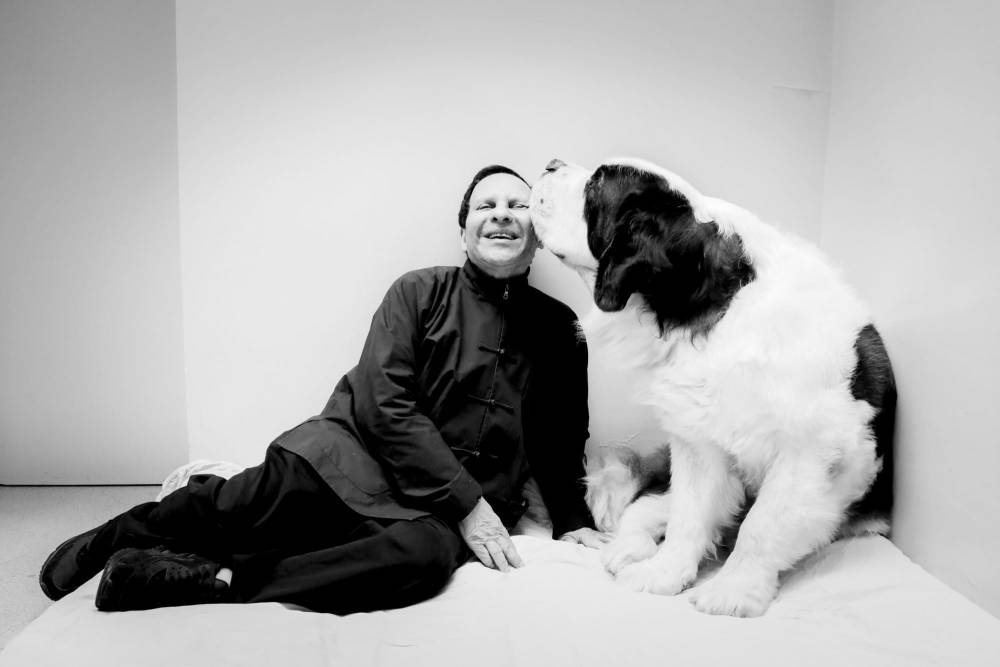