Immediately following last week’s Spring/Summer 2020 Maison Margiela presentation, Minnie Muse sat down for tea at the Margiela headquarters with Gypsy Galliano, the 8-ish-year-old Brussels Griffon belonging to the house’s creative director, John Galliano. We were eager to hear more about the many ways her doting godmother, British makeup artist Pat McGrath, spoilers her – hint: it involves glitter and false eyelashes – which Natalie Wood film she most strongly identifies with, why the early renaissance is her favorite period in art history, and which of her papa’s most iconic runway looks is her ultimate favorite… 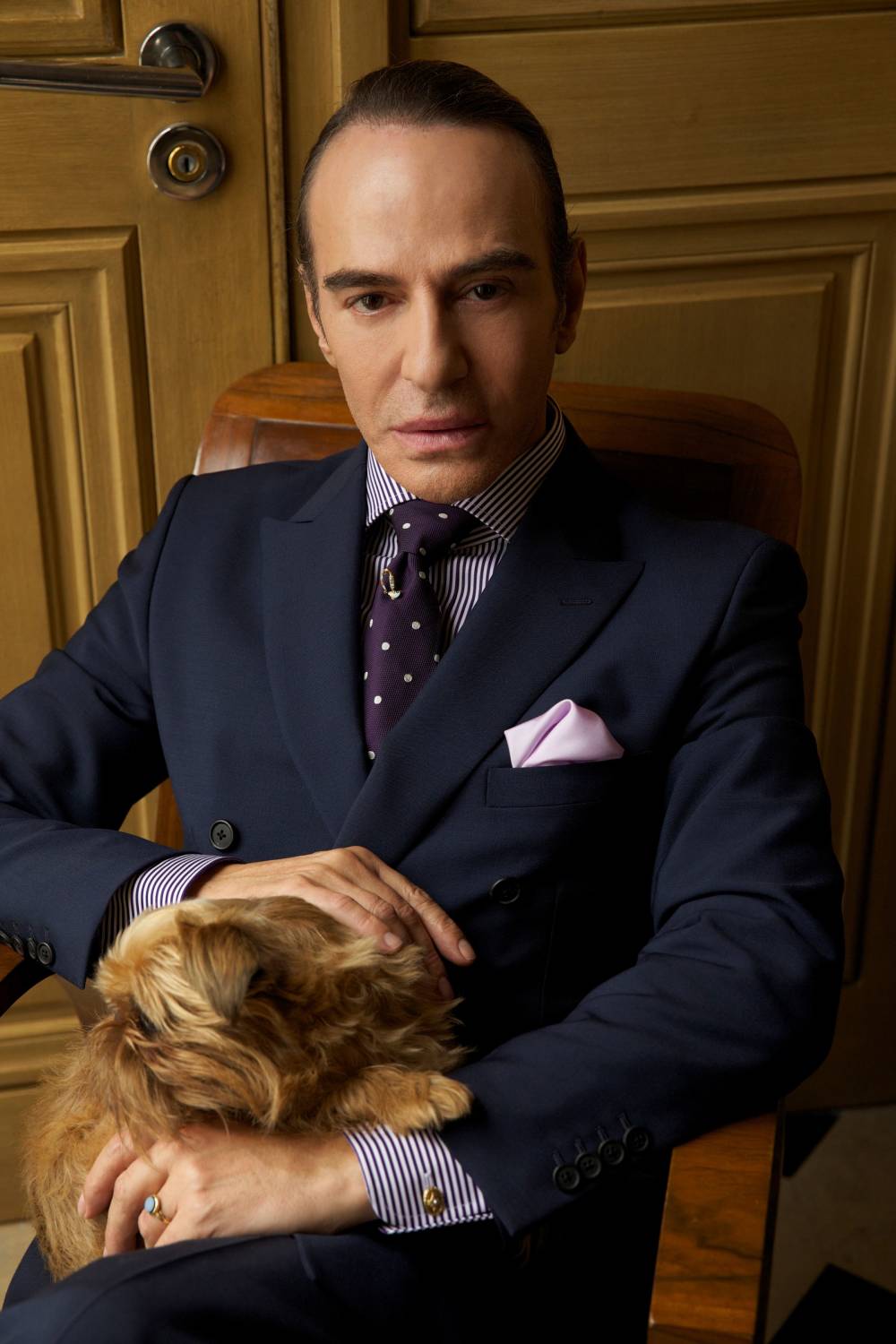 Portrait of John Galliano with Gypsy, 2014

Minnie Muse: It is a pleasure to meet you Gypsy. I love your name; do you have any nicknames?

MM: Where do you call home?

GG: We live in the Marais district in Paris, just around the corner from the Musée Picasso, and have a home in the French countryside.

MM: You mentioned ‘We,’ do you have any siblings?

GG: Yes, I gained a little sister in 2017. Her name is Miss Coco but I call her my ‘(a)sist(ant)’ because, as the first child, I reserve the ability to break her in and teach her about life.

MM: That is so kind of you, what is Coco like?

GG: She is a real diva! True to her name, she loves Chanel and even has her own separate Instagram account (@cocopopofficial) on top of the one we already share. 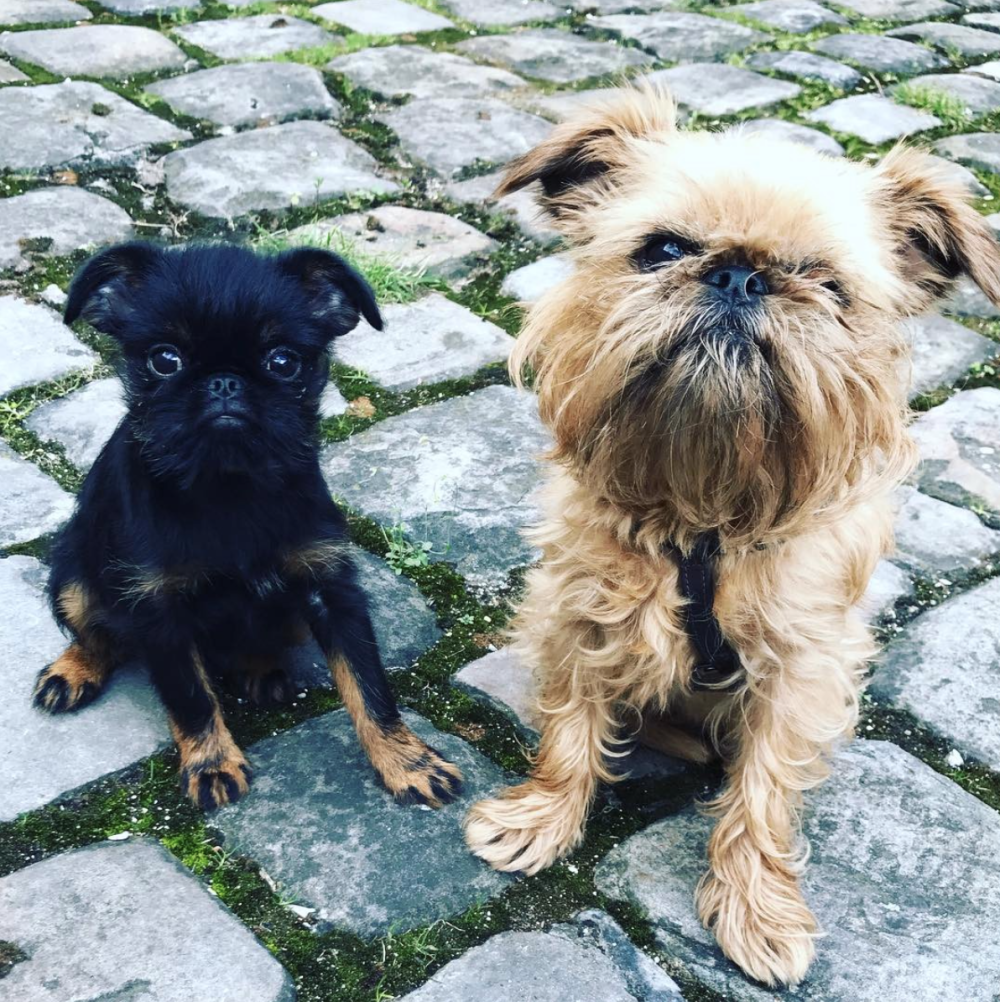 MM: It is no surprise that she would have an appreciation for fashion! Do you also enjoy dressing up?

GG: I love accessorizing. I am still deeply connected to my Maison Margiela Tiger Platform Boots from Fall/Winter 2016. Papa took inspiration from my coat’s coloring to achieve the perfect golden brown, contrasted by elegant chocolate stripes. Meanwhile, the platform-heel combination adds both height and comfort. I took a liking to them early on, so around the atelier they were nicknamed the ‘Gypsy Boot’ in the days leading up to the Fall/Winter 2016 runway show.

MM: Do you often assist your papa in the atelier?

GG: Of course! Anywhere papa goes in la maison you hear the pitter-patter of my paws – or boots – right next to him. I go to work everyday to help with fittings and serve as the occasional ‘stand in’. I even have my own petite version of ‘la blouse blanche,’ as papa calls it, the classic Margiela uniform of a white cotton work coat; which shows my distinguished position. If there is any doubt, just refer to the January 2019 issue of British Vogue. I made an appearance wearing my coat alongside papa and Coco.

MM: How do you get to work every morning? Do you have a dog carrier?

GG: My Maison Margiela Medium Glam Slam bag in tomato red is my second home. The inside is just as padded as the exterior; it is like being carried on a cloud.

MM: Is that your favorite place to sleep?

GG: Since I was young I was blessed with ability to nap almost on command. It is a skill I will always cherish, especially during long nights at the atelier leading up to a collection. Now that I have Coco, I always prefer cuddling next to her than sleeping alone.

MM: Given the stress of working as a full-time designer dog, how do you relax?

GG: My favorite vacations are always our extended stays in the country following fashion week. We’ve had a stone farmhouse in Auvergne, a region in south-central France, for years now. Being surrounded by nature is the best way to unwind and decompress. 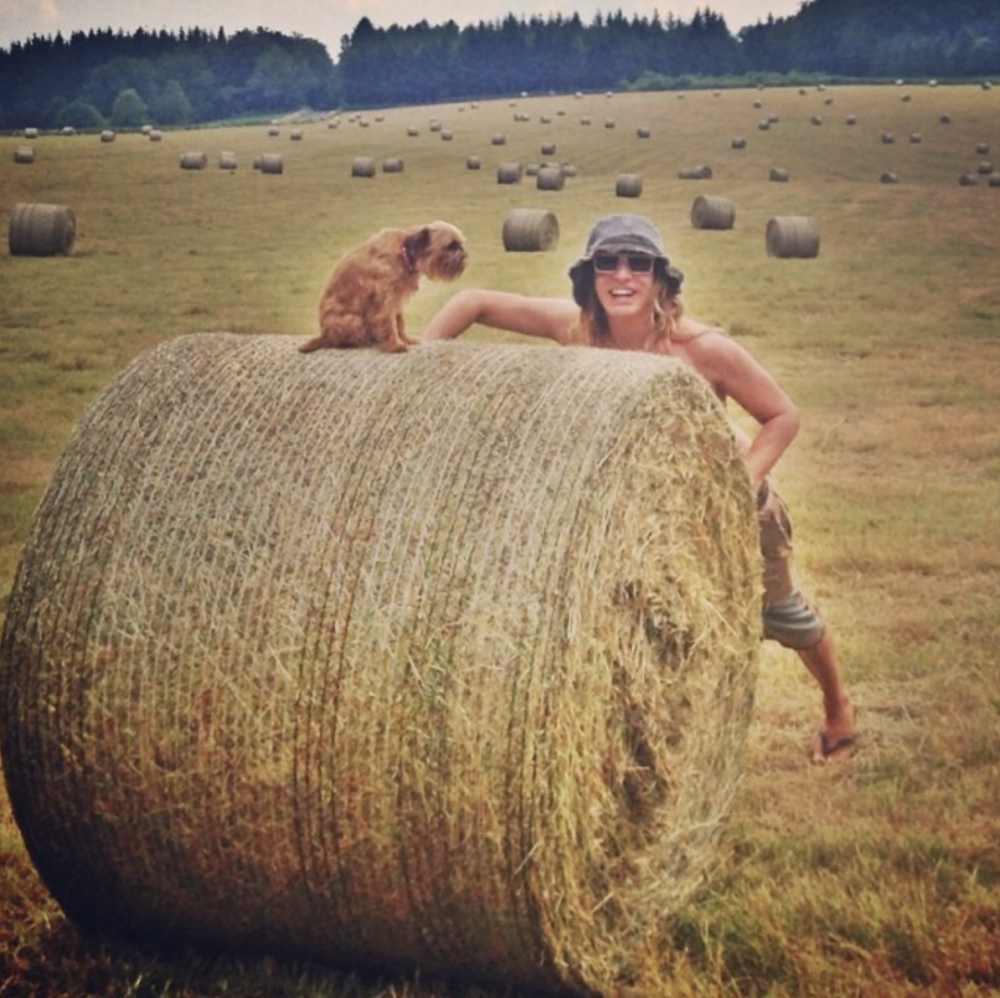 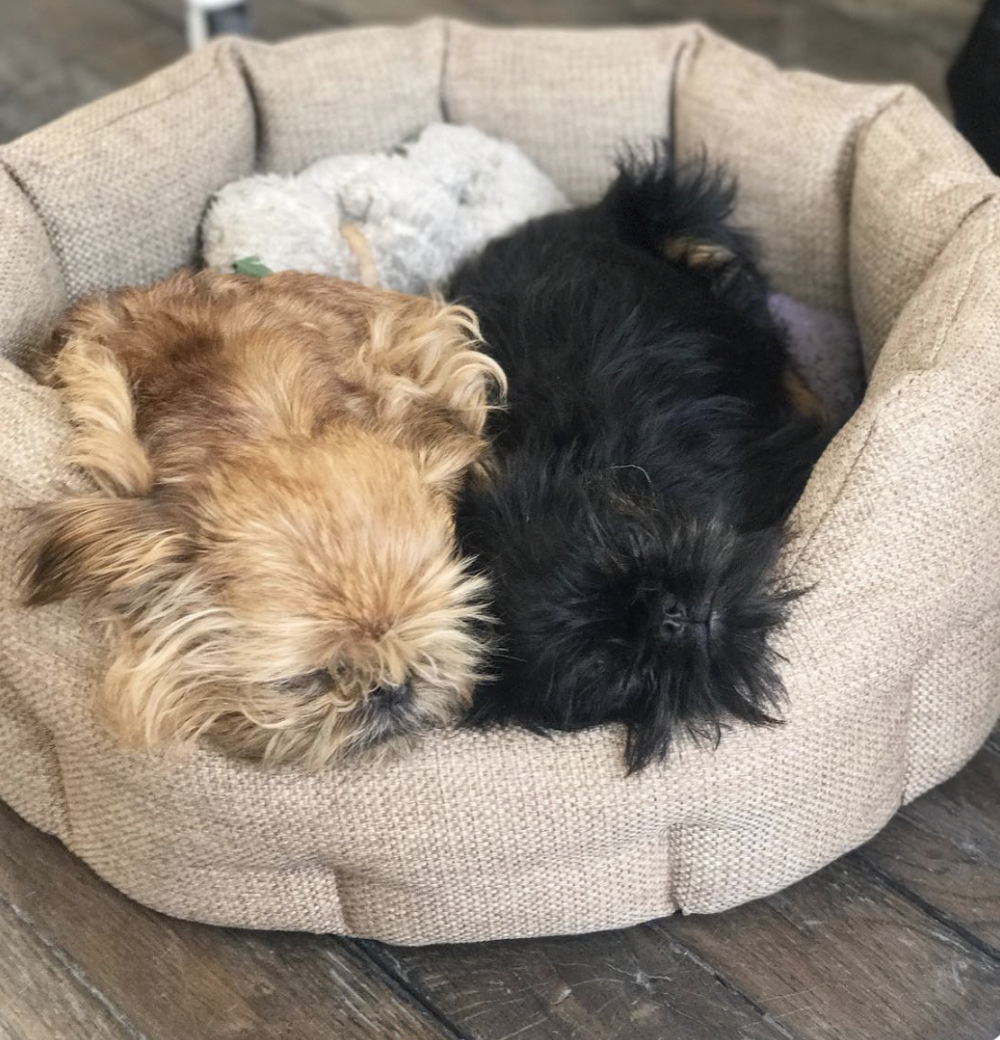 MM: You mentioned that you live around the corner from the Picasso museum, that is an art lover's dream, do you have a favorite work?

GG: Visiting the Musée Picasso is a wondrous experience, but much like papa, I am a great fan of classical painting, particularly that of the Early Renaissance. There is a work by the name of ‘Arnolfini Portrait’ from 1434 by Flemish painter Jan Van Eyck, that has always stood out in my mind. While I insist it is due to Van Eyck’s masterful understanding of color, texturual details and perspective, others seem to think I am most drawn to the furry creature rendered at the bottom of the canvas, which just so happens to be an early form of the Brussels Griffon breed. I would like to think I have more substance than to choose a favorite work that, more likely than not, has one of my distant relatives featured prominently in its composition… Who’s to say?

MM: And what about film? Do you have a favorite movie?

GG: I absolutely love the cinema. Growing up we watched everything from classical film noir to modern works by acclaimed French and Spanish directors. Despite papa’s fixation with early 20th century starlets and Old Hollywood classics, I happen to love comedy, drama and romance. Two favorites that come to mind are the 1962 film ‘Gypsy’ staring Natalie Wood – you may be able to guess why – and Woody Allen’s 2011 fantasy romance film, ‘Midnight in Paris’. Papa loves taking us on late night strolls through our neighborhood, during which I always find myself hoping to turn a corner and be transported to the golden age of 1920’s Paris, just like in the movie.

MM: Besides your papa, who is your favorite companion with whom to explore Paris?

GG: While I am blessed to have two amazing papa’s [John Galliano and Alexis Roche], I am eternally grateful for my incredible godmother [‘mama’], makeup artist Pat McGrath. Mama has been a close friend and collaborator of papa’s since his early days at Dior. She was one of the first people I met after coming home and we immediately fell for oneanother. She loves taking me on strolls in our building’s courtyards and has even been known to shower me in glitter and false eyelashes during makeup tests before the collections.

MM: Speaking of the collections, your papa is not only known for his spectacularly imaginative designs but his otherworldly runway shows, particularly during his days at Dior, is there one in particular you wish to have attended?

GG: Only one?! The list is endless. From papa’s lavish Spring/Summer 1998 Dior couture presentation at the Palais Garnier Opera House in Paris, and the Egyptian-themed Spring/Summer 2004 couture show where model Erin O’Connor emerged from backstage, unrecognizable under a painted face and massive gold ensemble echoing Nefertiti and the lavishness of Ancient Egypt, to Dior’s Fall/Winter 2005 couture show set in a dramatic Edwardian garden, the ideal backdrop for a collection of ensembles made entirely out of tulle. Oh, and I must not forget Dior’s Spring/Summer 2007 couture show, for which papa drew inspiration from the Far East, as seen through the collection’s unique silhouettes, delicate means of embroidery and opulent origami folding techniques… Need I go on?

MM: Point taken, of course there could never be just ONE collection. It seems your knowledge and understanding of your papa’s career at Dior is vast. While his work as creative director of Maison Margiela is equally as impressive and thought-provoking – in perhaps a more conceptual manner – the format of his shows have certainly evolved; namely, he remains backstage, hidden from guests à la the house’s famously press-shy founder, Martin Margiela. As a young girl waking up in the morning to look at images John’s runway shows on Style.com before school, one of my favorite moments when clicking through the images was the anticipation of seeing what he, John, would be wearing for his final walk. Do you have a favorite look he’s worn?

GG: Still a difficult question, but perhaps slightly easier to narrow down. While papa has certainly worn some imaginative looks down the runway, nothing beats Dior’s Fall/Winter 2006 couture show, when he emerged from backstage as an astronaut.

MM: I was hoping you would say that! Mine too. On the topic of dressing one’s self, do you have a favorite garment or ensemble?

GG: Papa had the Margiela atelier make me a custom rainbow striped sweater that I love to wear on chillier days, particularly those spent out in the country.

Gypsy in a Custom Rainbow Sweater

MM: You seem to spend a lot of time at home in the country… Do you enjoy going out when you are in Paris? Do you have a favorite restaurant?

GG: Le restaurant Lapérouse in the 6th arrondissement is the best place to indulge in a luxurious désuet atmosphere. The historic French restaurant was established in 1766 and has been newly renovated, with restored murals and a tasteful tabletop restyling by Dior Maison creative director Cordelia de Castellane. Papa has been going to Lapérouse since the 1990s, for late-night hangouts with Kate Moss and other fashionable friends. While some of the waiters are still there to remember the old days, times have certaintly changed, and now it is our favorite spot for un dîner privé.

MM: Out of what type of bowl to you eat?

GG: I dine out of an antique Chinese porcelain bowl that sits atop a golden stand originally from 17th century France; papa purchased it for me during one of our Sunday flee market jaunts.

MM: It sounds like you have quite a love for aesthetics; do you have a favorite sent?

MM: Given that the holiday season is just around the corner, do you have any gift ideas to share?

GG: There is no chicer gift than something beautiful and fragrant for the home, and papa’s ‘Essence of John Galliano’ scented candle from Diptyque hits all the right notes. 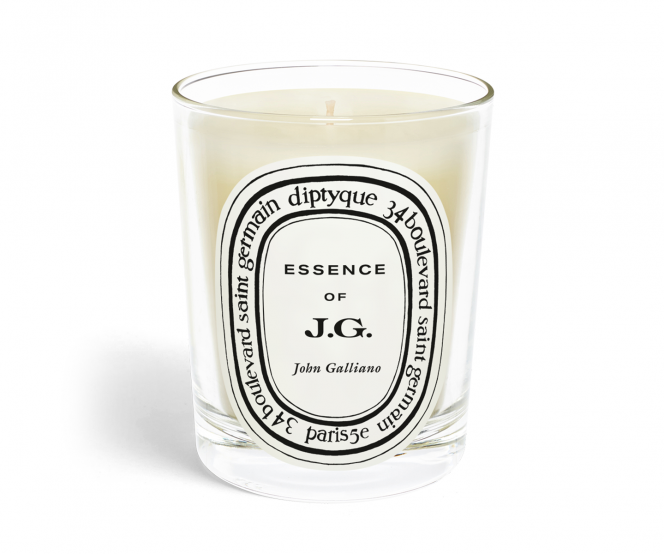 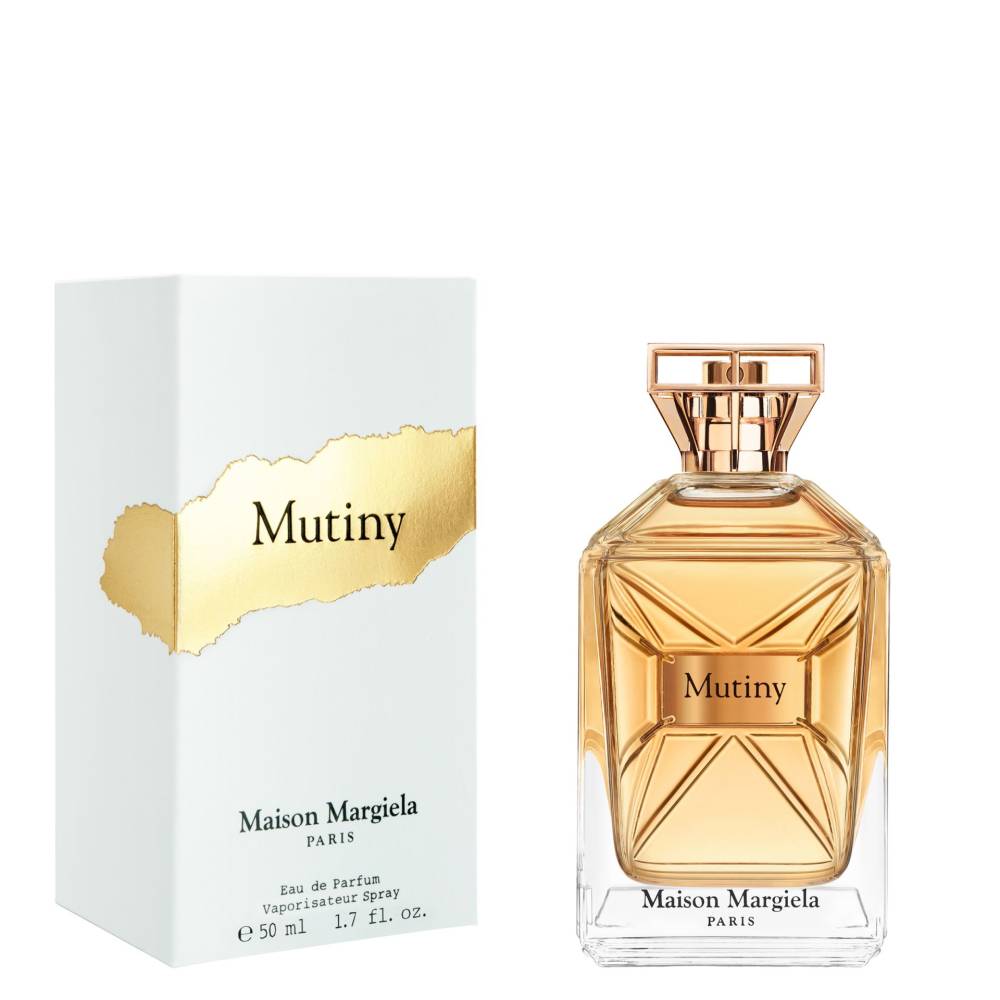 MM: One final question… Your papa adopted you during his time in recovery. While his career ‘BG’ (before Gypsy) will forever go down in fashion history, he is still designing dreams and making a mark on contemporary fashion. Do you have a favorite dress that you have seen come to life?

GG: Without question Kate Moss’s wedding dress in 2011. Not only because Kate is like family, but it was a touching gesture to have papa design the most important dress of her life during a period of recovery when he was no longer at Dior but had not yet been hired by Margiela. The dress was a classic Galliano design: slightly sheer, cut on the bias, embroidered and ultra feminine. Not to mention, she looked utterly beautiful. 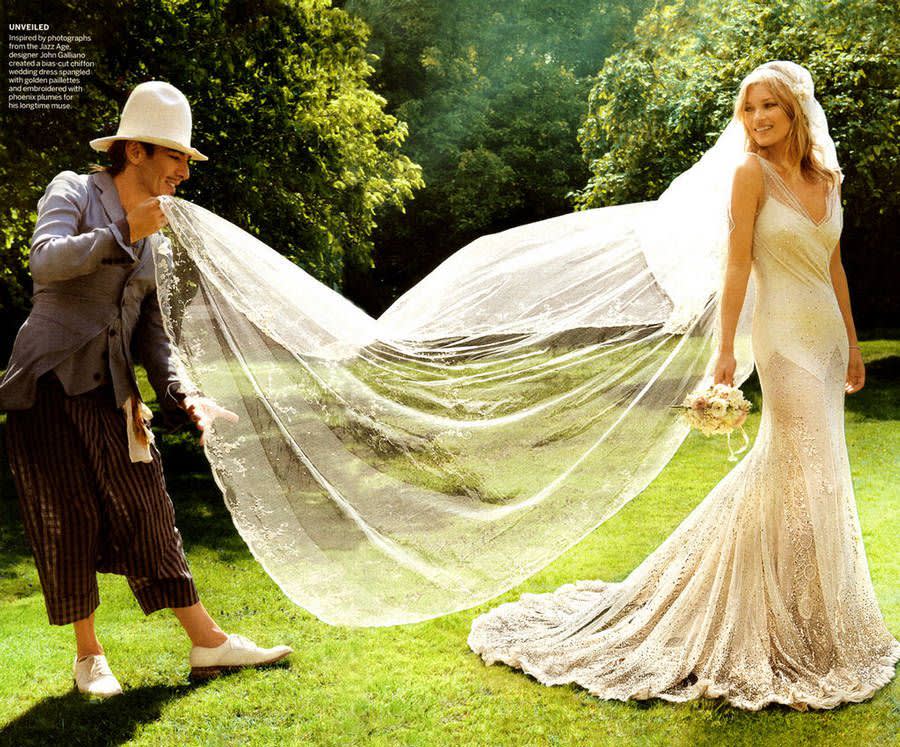