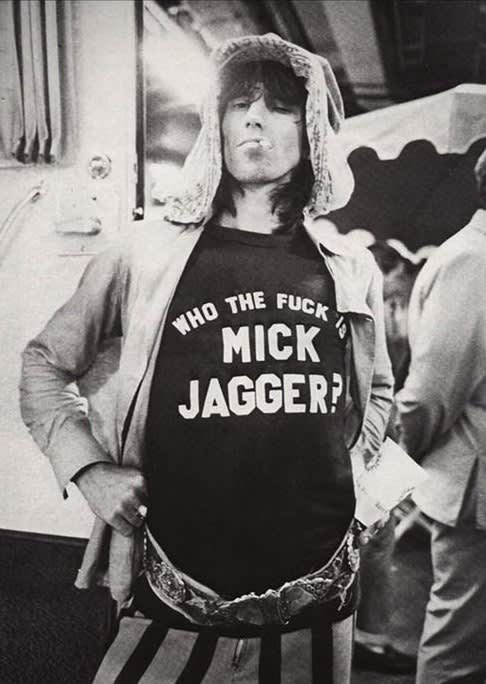 Keith Richards wearing a "Who the F*ck is Mick Jagger?" T-Shirt

During the Rolling Stones' Tour of the Americas, 1975

Merch has a deep-rooted history in the constructs of popular culture and branding. From early concert t-shirts and a favorite sports team’s jersey or baseball cap, to vintage postcards, an EPCOT mug, and all other forms of treasured ephemera, merch represents physical nostalgia. Whether awakening cherished memories or serving as a mere souvenir of a former era, the tangible and emotional duality of merch has played a vital role in the progression of the medium.

Unsurprisingly, the music industry is most responsible for igniting the world’s fascination with merch, beginning in the 1940s and 50s when ‘Bobby Soxers’ – a sociological term coined to describe zealous fans, often teenage girls, of traditional pop music – started writing the name of their favorite musician across the back of their jackets. From its inception, merch was an extension of one’s identity, a means of communicating a message while declaring allegiance to a particular person or band. As such, in the 1950s Elvis fans began producing their own merch – suggesting a connection between the wearer and the musician they idolized – to further associate themselves with the star.

We will contact you shortly to process your order.

Frank Sinatra and the 'Bobby Soxers'

The subsequent decade saw the emergence of merch on a much larger scale and into the realm of mainstream consciousness. Bands began producing their own t-shirts – one of the most potent and principal sub-categories of the genre – as a means of selling product and selling stories. The Beatles, early adapters of this phenomenon, understood the power of merchandise and its role as a status symbol for the object’s wearer.

From early Rock & Roll t-shirts of the 1960s, stemmed tie-dye versions with logos – associated with the hippie phenomenon of the 70s – followed by heavy metal and grunge interpretations of the 80s and 90s. While the aesthetics of these movements differ significantly, the likeminded feeling of community fostered by each respective genre’s merch was omnipresent.

The Velvet Underground and Andy Warhol

From early band t-shirts associated with alternative rock groups often relaying radical messages, entire subcultures emerged through the idea of ‘merch’ – symbolizing notions of non-conformity tied to the music scene. As any niche phenomenon often does, concert t-shirts quickly migrated down the cultural silo and into the realm of mainstream. Throughout the 1990s, as musicians began feeding off their image and extending themselves outside of concert arenas and tour venues, merch evolved from a symbol of rebellion into a symbol of status.

When stores such as Urban Outfitters, Forever 21 and H&M started exploiting the merch phenomenon, shoppers were able to buy into a band having never actually listed to their music. As the channels of distribution widened and concert t-shirts quickly went from cool to mainstream, they lost their original meaning but not their significance. Through this symbolic ‘Merch Diaspora’ of the late 1990s, the genre was redefined as a modern day phenomenon.

Well before the household computer, or the existence of smart phones and social media, merch was a means for people to broadcast who they were through a simple graphic, allowing wearers to construct individual and emotional identities. Today, companies brand their products and people brand themselves much like rock bands did beginning in the 1960s.

Through its innate ties to mass distribution and branding, merch has forever touched on central totems of contemporary culture; a trait which later contributed to the expansion of merch well outside confounds of the music industry. In 1986, for example, Steve Jobs launched The Apple Collection, comprised of Apple-branded clothing, logo-adorned accessories and colorful lifestyle items. Likewise, the 1980s also saw the emergence of ‘The Smile Makers’ catalogue, a sixty-four page brochure of McDonald’s-branded merchandise, allowing the American fast food company’s fans to buy into a lifestyle outside of just burgers and fries. 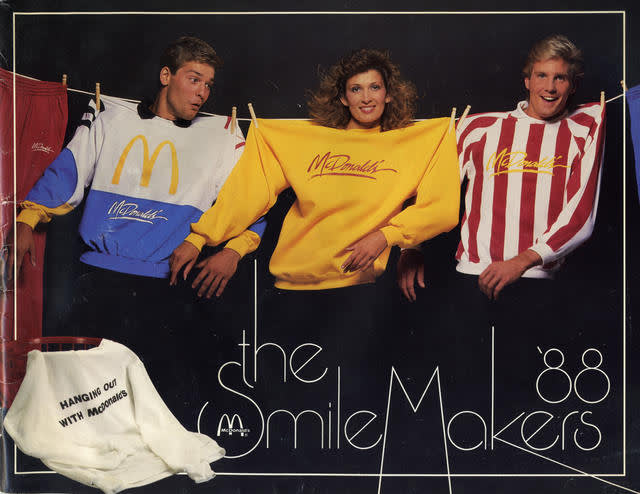 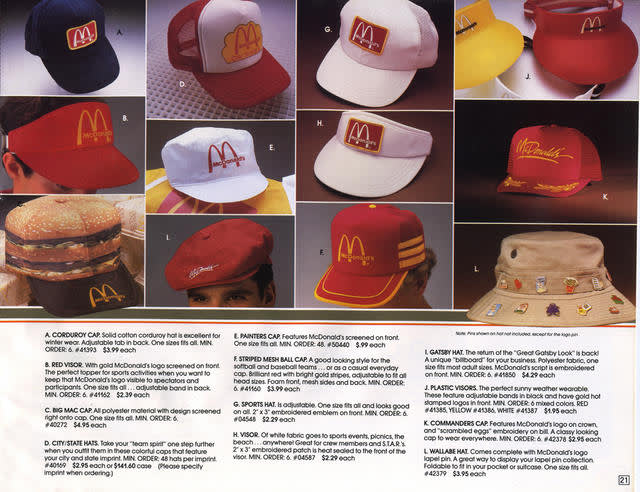 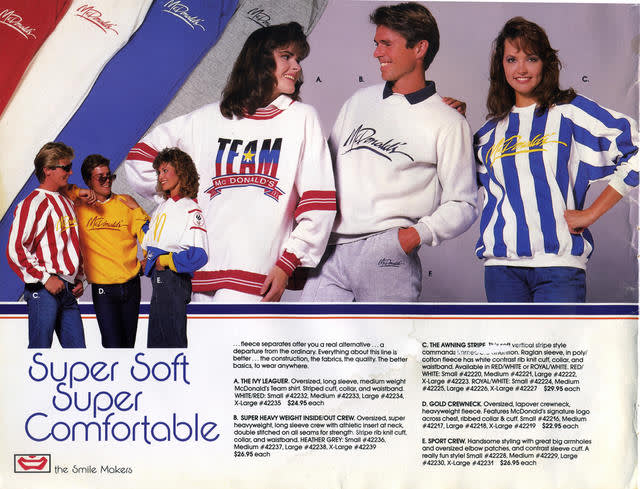 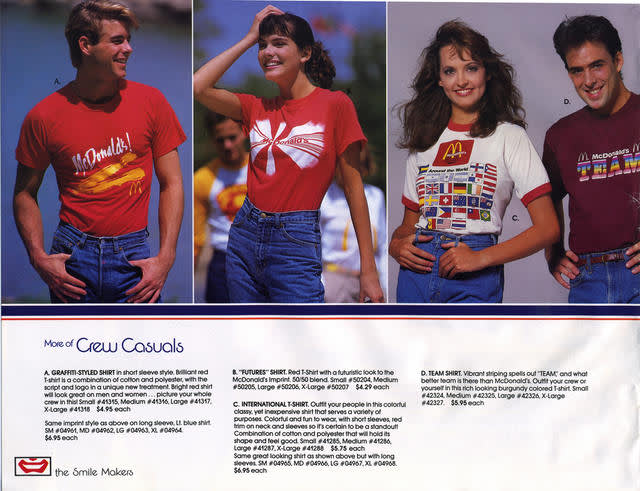 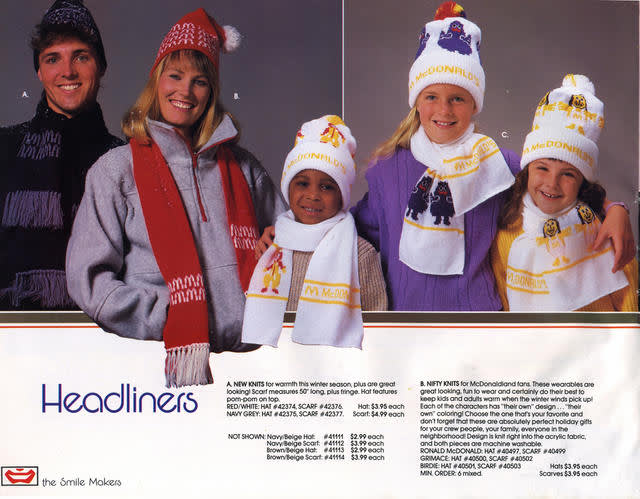 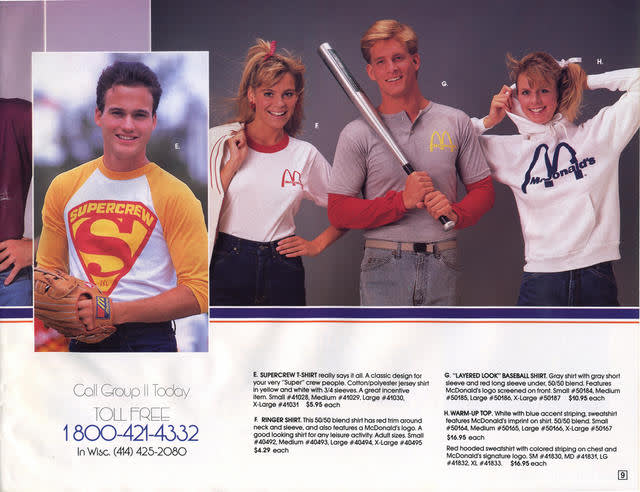 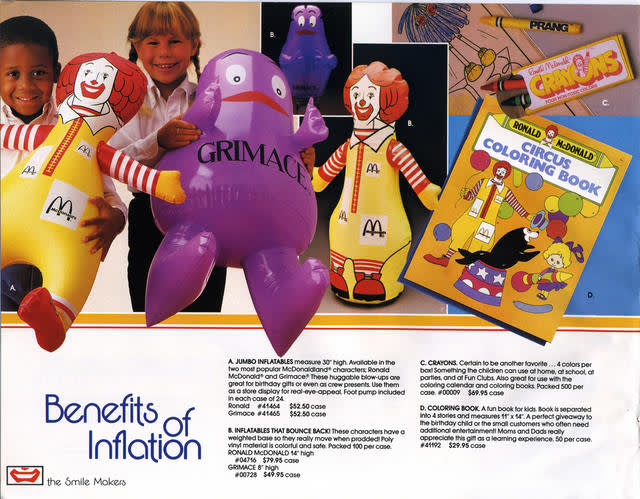 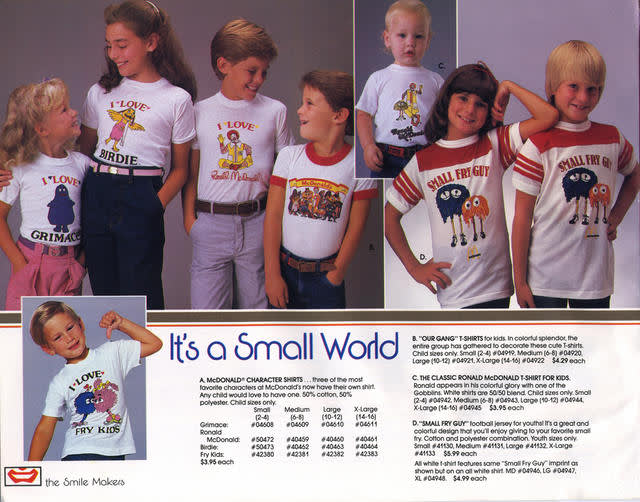 The emergence and subsequent evolution of merch was a pre-cursor to the world in which we currently live. Its ties to nostalgia and suggestion of innate scarcity are two rudimentary themes of commerce today. Limited edition ‘drops’ are now ubiquitous with fashion, while designers and musicians continually reference 20th century concert merch through hallmark typography and graphics.

Vivenne Westwood was one of the earliest high fashion adapters to tap into the link between style and subculture, while Nicolas Ghesqiere did so in 2012 through t-shirts he designed at Balenciaga. Likewise, Kanye West worked with artist West Lang to rip off old-school heavy metal merch for his 2014 Yeezus tour.

Merch will forever be a treasured phenomenon; both for its unwavering historical and cultural significance, as well as the countless industries it has permeated since its emergence in the 1950s and 60s. Fittingly, drawing connections between art, fashion, and references of the past, is one of the defining traits of the Minnie Muse brand. As such, it is no surprise that we would choose ‘Merch’ as both a brand name and philosophy off which to model our newly launched Minnie Muse product line. 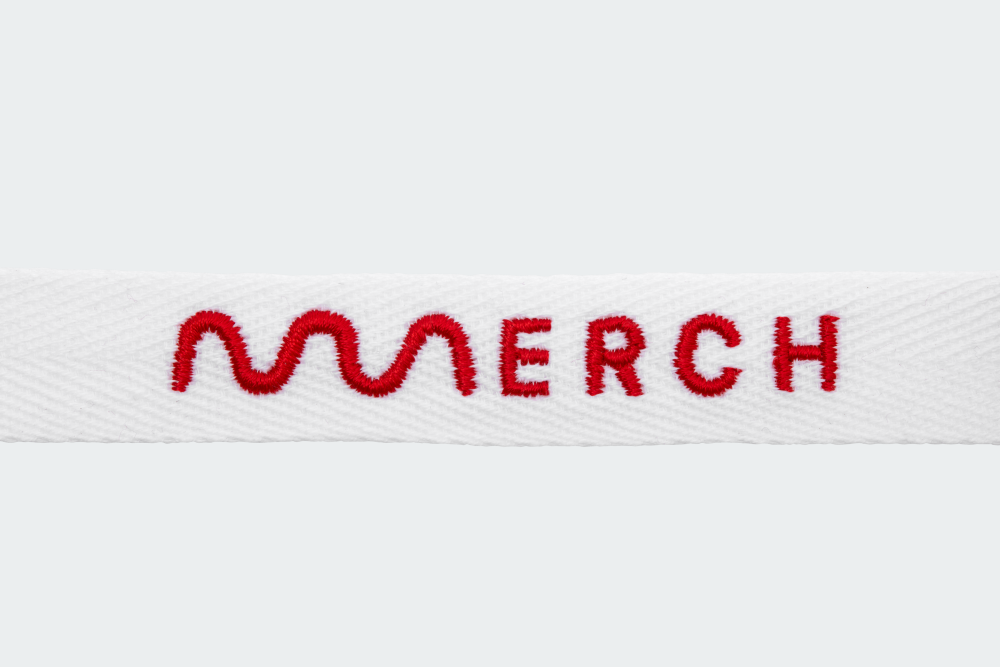 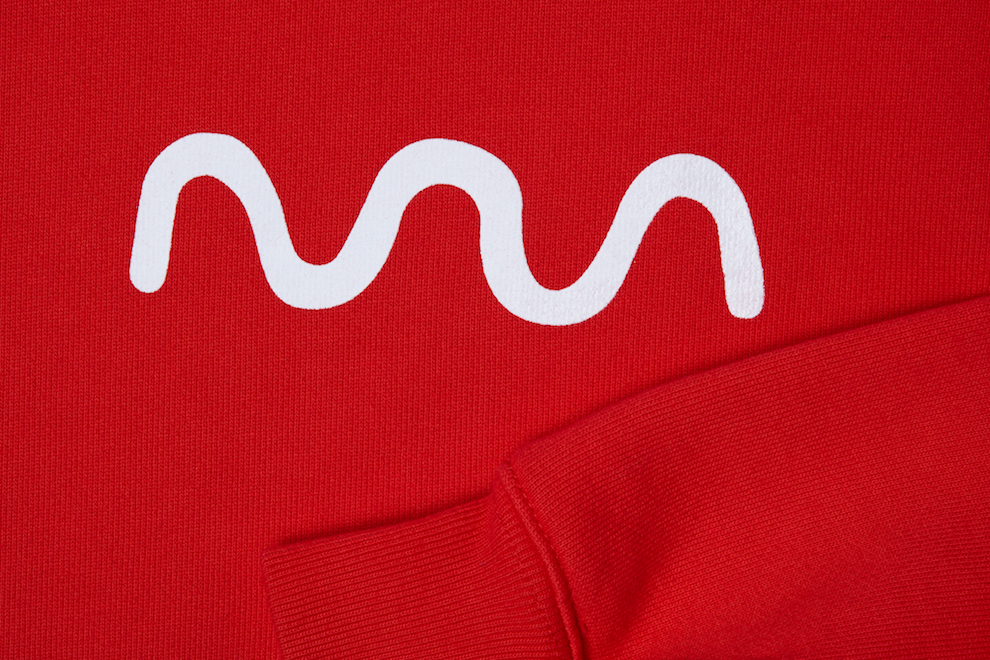 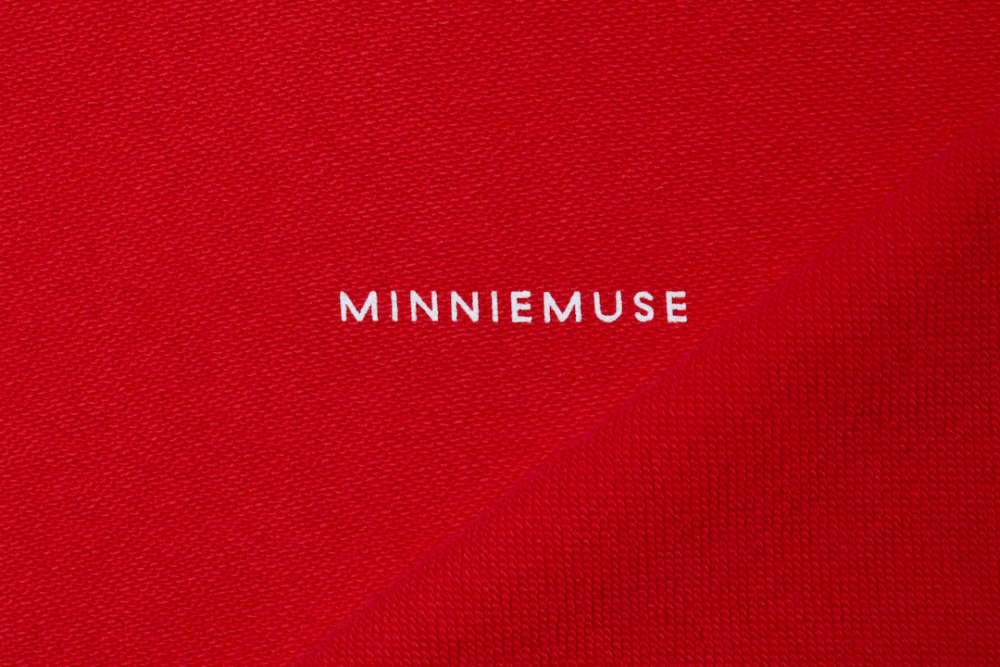 Minnie Muse Merch, in its totality, is a means of extending our brand and iconography into a contemporary visual lexicon, while symbolically channeling the nostalgia and narrative associated with merch and ephemera. Attached to each piece of merch is a story, a quality we have instilled in our two debut products – the Minnie Muse Merch Hoodie and Bubble Wrap Tote – and a characteristic we hope to build upon with all subsequent items to come.